Planes, trains and tuk-tuks: Uganda to Zambia and back

“In East Africa, buses don’t move until all the seats are full and we had to wait for people to load all sorts of luggage,” my friend Anna, who’d made the two-day journey (a £25 fare) from Uganda to Tanzania via bus, warned when I told her I was considering doing this.

“When the bus was loaded, somebody turned up with several giant planks of timber and placed it in the aisle, making it difficult to move around. Some of the passengers had feathers. And, when we reached the border in the middle of the night, the bus broke down and we had to unload it – including the wood – wait for several hours for a new one to come, then load everything on again.” Hmm, I decided to fork out the £150 for the two hour Air Uganda plane ride.

TIP: Safari Inn is a budget hotel in Dar es Salaam popular with backpackers. The city has some great markets like Kariakoo, where you can haggle for a bargain, and the fish market, where you can watch an auction.

In Uganda, I’m a boda-boda babe. There’s said to be at least 100,000 motorbike taxi drivers in the capital Kampala. Although often described as a “deathtrap on wheels”, they’re inarguably the quickest way of snaking through the city’s notorious gridlock. Dar appears to have less, even though the traffic seems worse. For the trip across town to the Tanzania-Zambia Railway Authority (TAZARA) station, my suitcase is strapped down to the bike’s back. I’m running late for the Friday 13.50 Mukuba (meaning copper in Zambia’s Bemba language) Ordinary (read: slowest) service to Kapiri Mposhi, a small town in Zambia’s Central Province. When I arrive to check into my first-class sleeper cabin (£40 one way) I’m told the train is running 10 hours late. I kill time buying supplies – then eating them and buying more – at Shoppers supermarket and the Kahawa Café in Masaki (check out the mini chocolate mousse, plus there’s free wifi). Dar is also home to many colourful tuk-tuks, but I’m a motorbike girl so am easily seduced by the Bajaj bikes. But they drive even more recklessly than bodas and it’s a nail-biting ride back to the Tazara station.

TIP: Book your Tazara tickets in advance if you can. Sykes Travel is highly recommended for this.

When I arrive at the station my mousse is squashed but I’m told the train is leaving on time. Built in the 1970s with an interest-free loan of about £252.5 million from China, the Tazara, aka the Great Uhuru Railway (‘Uhuru’ means ‘freedom’ in Swahili) became a significant alternative transport system for Zambia, a copper-rich but landlocked southern African state which, at the time, was sanctioned by still-colonised neighbouring regimes for supporting the liberation struggle of many of those countries.

There’s close to a million passengers using the railway annually today, with the train a necessity for locals in southeastern Tanzania where the roads are poor, impassable or nonexistent. Locals, including men sitting on bags of cement, have been camping outside the station waiting for the train all day and when it arrives the children cheer and run towards it. Luggage is passed in through the window. I’m sharing a car with thee women including Mary Mwape, a trader from Lusaka, Zambia’s capital, who’s been in Tanzania for work. “We get there when we get there,” the frequent Tazara traveller replies when I ask about our ETA in her home country. I spend my time on board getting to know the locals and reading. The fan in our car doesn’t work, making it unbelievably sticky and humid, there’s no running water and the dining car menu leaves a lot to be desired. Despite the train squeaking and jolting heavily when it stops, it’s surprisingly easy to get some sleep. But two days into the trip no one seems to know when we’ll arrive in Zambia. As railway spokesman Conrad Simuchile warned me before leaving, “The things you experience on TAZARA are the real life experiences Africans have on a daily basis. So the important thing is to get on TAZARA with an open mind.” 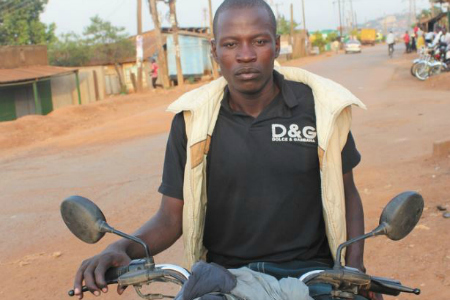 Danish couple Sara Strandstoft and Jacob Anderson are travelling with their two young boys and planning on doing a Zambian safari later on. “We took our watches off, time goes as it goes,” she laughs towards the end of the trip. After we cross the border into Zambia women run alongside the train selling caterpillars, a popular high-protein delicacy in the country, to passengers on board who’ll take them to Lusaka to resell at Soweto Market. By the time we arrive in Kapiri, nearly four days after leaving Tanzania, we’re at least 17 hours late. But it’s been the trip of a lifetime

TIP: You can buy visas for both Tanzania and Zambia on board the Tazara. Take some US dollars.

Spinning out of control:

No longer in the land of boda-bodas and tuk-tuks, I get a minibus from Kapiri to Lusaka, which takes about two hours.The capital is off the tourist track and appears tame, but scratch beneath the surface and you’ll be surprised at what it offers. The ‘block party’ held in Hollywood City Night Club (1686 Panganani Road, 10101 Lusaka) in the Villa Elizabeth neighbourhood, usually every Friday, Saturday and Sunday from 9pm, is something you won’t hear about from other tourists. Besides dance-offs, a highlight is the ‘burn outs’ by the BMW sports club, featuring local women half hanging out the window of cars as the stunts are performed, the crowd rushing to capture the action on their phones. “You’d get locked up for doing that back home!” exclaims Dan, an Aussie I met at Paseli Hostel, a good stop for travellers passing through.

After a four-day rail trip, the seven-hour bus ride from Lusaka to Livingstone seems like a walk in the park. My three-day stay in the adventure capital of Zambia includes a stroll through the Victoria Falls National Park to see the stunning waterfalls, high tea at the Royal Livingstone Hotel, where I practically rub shoulders with a zebra, and a sunset cruise on the Zambezi, watching hippos and crocodiles while sipping G&Ts.

TIP: In ‘Livi’ stay at Jollyboys Backpackers Lodge and Camp.

The Tazara ‘Mukuba Express’ service, which I take from Kapiri back to Dar, has plenty of local Kilimanjaro and Mosi beer on sale to keep me happy. This time we depart on time and the trip only takes two days, although it’s not without drama. Just before we reach Mbeya, in Tanzania’s southwest, we’re told a cargo train has derailed, affecting our journey.

We’re packed into two minibuses and driven to a train station before we board another railway at night. On the way I meet Lukáš Zavadil and his girlfriend, both TV producers from Studenka in the Czech Republic. They’ve been volunteering for an NGO in Zambia and are now taking the train to Dar, where they’ll get a ferry to Zanzibar. “It’s much, much better than travelling by bus, which is fast and furious,” Lukáš says when I ask him about the journey. “You feel so free as you enjoy the beautiful views and abandoned train stations, where time seems to have stopped.” 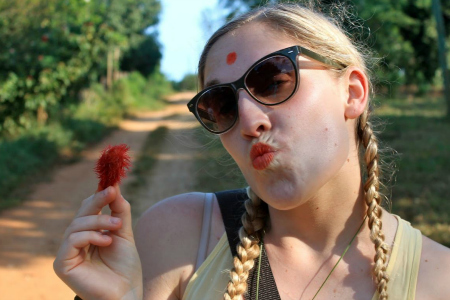 Back on the railway, the next afternoon we travel through the spectacular Selous Game Reserve, the largest expanse of game reserve in Africa. As I wander through the carriages, spotting impala and elephant out the window, I see a man being led through the carriage in handcuffs. The next day, through the local paper, I learn he was detained for carrying 14 elephant tasks and one hippo tooth.

Back in Tanzania it’s boiling, but there’s just enough time for a quick trip to Zanzibar for a swim. I book an afternoon ferry through Costal Fast Ferries. It’s a slightly wild ride, if only I’d had some ginger, which the next day while on a spice tour I learn is good for seasickness (but can also put men ‘in the mood’). Nutmeg is good for women, we’re told. But I’m more mesmerised by the inedible elephant apple (which apparently doubles as a hair gel) and annatto or lipstick fruit, which is just my shade of orange. We receive free accessories hand-made from leaves and have lunch before going to the beach.

Before I know it, I’m on the plane back to Uganda and I’ve got my answer: it’s the journey. While I’ve had a great time in Livingstone and Zanzibar, the undoubted highlight of my month-long holiday has been my time on the train. I’m certain I’ll never have a trip like it ever again.

TIP: In Stone Town stay at Jambo Guest House (email them at info@jamboguest.com). They can arrange spices tours, among others, for you.