A Point Break remake has been confirmed, sending fans into a frenzy of – mostly – horror.

The 1991 classic, starring Patrick Swayze and Keanu Reeves, follows a bunch of surfing, bank-robbers who are infiltrated by an FBI agent (Reeves).

Directed by Hurt Locker’s Kathryn Bigelow, the original Point Break is now 20 years old and, it seems, studio bosses have decided its time to give the film a re-gloss. 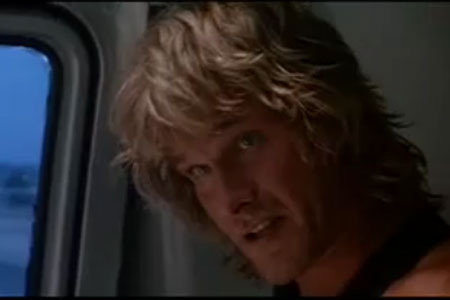 Kurt Wimmer, who wrote the recent remake of Total Recall, has written the screenplay for the new Point Break.

An official statement from Alcon Entertainment said: “the film is being fast tracked, with the filmmakers set to take the project out to directors soon”.

For Point Break fans the remake itself is insult enough; that it comes on the film’s 20th anniversary only makes it worse.

“Point Break remake official? This is the last straw, I guess the world will end next year after all…”

“Point Break to be remade? Swayze will be turning in his grave.”

“Hollywood seem to be planning a lot of pointless remakes recently. The erosion of originality in film continues.”

In fact, this is how a lot of fans are reacting:

The new film is said to be “set in the world of international extreme sports”. It will involve an undercover FBI agent infiltrating a criminal ring, however, film makers have not revealed which other details will remain true to the original.

Alcon's co-CEO’s Broderick Johnson and Andrew Kosove said in a statement: “Who doesn’t love the Kathryn Bigelow original and its pure heart-pounding action and thrills? Kurt’s take infuses the story and characters with new twists and settings.”

The original movie achieved cult status, in part due to magnetic performances by Swayze, who played Bodhi, the too-cool-for-school leader of a surf gang; and Reeves, whose Johnny Utah landed him a place in the heart of every teenage girl.

What do you think – should they remake Point Break?

Ukulele Cabaret at The Lincoln Lounge