Knut the polar bear – Berlin Zoo’s most famous resident – has collapsed and died in front of a crowd of 660 visitors and animal rights’ organisation Peta are blaming the zoo for placing the bear under stress.

Visitors have filled Knut’s enclosure with flowers and cuddly toys to pay their respects to the famous four-year-old polar bear.

Knut is thought to have died of a heart attack on Saturday afternoon. The polar bear was seen to convulse in his pool before he floated still in the water.

Shocked visitors watched in horror and children began to cry as it became obvious that Knut was dead.

An autopsy will be performed today to confirm the cause of death.

However Peta attacked the “intensive” breeding of polar bears in Berlin Zoo and claimed putting Knut in an enclosure with three females led to “enormous stress”. 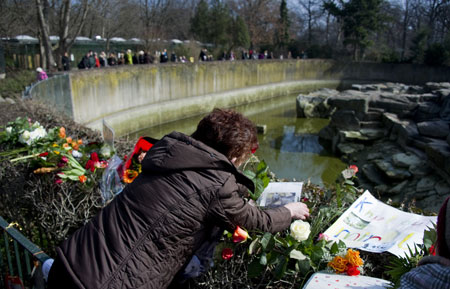 Visitors have created a shrine for Knut at Berlin Zoo.

‘I can’t comprehend what happened. He was happy before, there were no signs of anything – it’s so shocking,’ said visitor Eveline Litowski.

Knut’s keeper Thoman Doerflein hand-reared the bear after his mother rejected him.

In 2008, Doerflein died from a heart attack, reportedly from a broken heart as he had recently been banned from entering Knut’s enclosure when the bear became too dangerous. 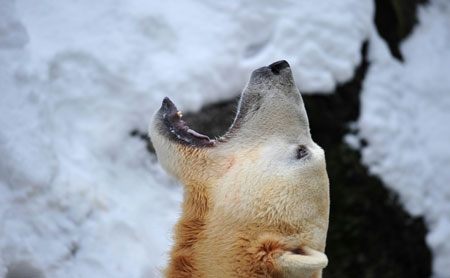 Knut too apparebntly became depressed and was moved into an enclosure with three females who ganged up on him, biting and chasing him.

Peta said: “We asked zoo authorities to move Knut. His premature death could have been avoided.”

Polar bears can live for more than 20 years in captivity.