Initially they found a home in Soho and then spread to Oxford Street and down to Piccadilly Circus, where their main clientele appears to be tourists and the thoroughly bevved.

But these days you can even find rickshaws ferrying Arsenal fans up the Holloway Road.

Well, seeing that the Science Museum is tonight hosting a debate about the future of transport in London at the Dana Centre, we thought we could do our part, and settle at least one dimension of the debate: the rickshaw dimension.

To that ends we’ve got two Londoner putting forward the case for rickshaws, and two putting the case against.

The case against rickshaws

Claire Tyler – paralegal, Archway
“At first I just thought they were a bit cringy. You either saw slightly terrified tourists in them, or erm, well, let’s say ‘revellers’ – or you know pissheads – and I didn’t see any harm.

“But some of the drivers are nuts, they sit there blocking traffic, or holding up buses. I swear to god, they barely get going much faster than walking pace most of the time.

“I don’t know what the situation is with how they’re insured but I’ve got to say I’m no fan. A couple of my friends have had really bad experiences with their drivers – like them getting a five minute lift and charging £25. There are no meters, so it seems like they just charge what they reckon they can get.

“I’m not like some people who say they aren’t in-keeping with London traditions – cities evolve, that’s how they work, but I do think they’re a bit of a fad. I kind of hope they go away.”

Martin Goodwin – systems analyst
“I hate them. I can’t handle them at all. I don’t know what they’re doing here, in London I mean. I want to meet the burk who introduced them here, or started selling them or whatever and I want to have a stern word with him.

“I don’t buy the melting pot, cultural influences shtick, we’ve got to protect what makes London, London – otherwise won’t all cities end up the same? And then what’s the point in going

“Public transport in London is exceptional. It really is. I know tubes are late and stuff, but relative to the rest of the country, there’s no comparison.

“The eco-argument is a non-starter, if you’re using public transport, you’re doing your bit. These rickshaws hold up buses and make the streets even harder for cyclists to get around.

“They just seem so dangerous. Why would you want to get into one? I can’t fathom it. Maybe have them for the parks, but even then I can’t think of a park in London with paths big enough for them. Daft is what they are.

“I remember those big red four person bikes that you used to get on the seaside. The Surrey Single bench! That’s what they were called. They’re far more in-keeping with the British aesthetic. And they go faster and you can get more people in them.

“If you want to pedal around in massive bike cars – why can’t we do it in those?” 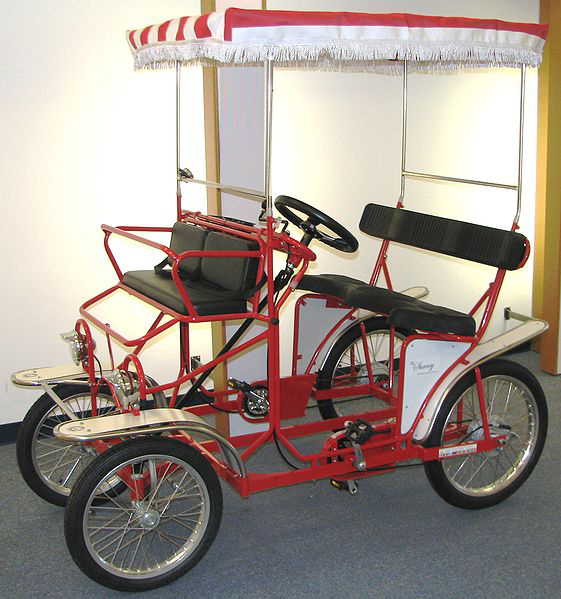 The case for rickshaws

Eke – rickshaw pilot
“I’ve been doing it for three months now. I’ve never even had a close call with a car or bike. We’re not going fast enough to be dangerous.

“It’s good. All the drivers are cool. There’s a nice community.

“Everyone I’ve ever taken has enjoyed it.

“Obviously like we’re not competing with taxis, it’s a fun thing. It’s ace.

“All the drivers really know what they’re doing. They know the routes, and it’s not often they travel for more than 10 minutes.

“London is an international place, and things like the rickshaws prove it.”

“I appreciate they’re not going to solve London’s public transport issues, but they can certainly become part of the transport mix.

“Tourists love the novelty value, and don’t mind paying for it. It’s a great way to get people who might not know exactly where they’re going off some of London’s busiest streets, where they might cause hold-ups, by stopping to unfold gigantic maps.

“During the day lots of central London’s smaller road aren’t that busy at all so the rickshaws cause no real problems.

“I appreciate maybe that metering might be an issue, I’ve heard of people getting ripped off and obviously I’m not cool with that. It’s a horrid feeling, knowing you’ve been ripped off, but London is expensive.

“They also provide great cost-effective promotional space for businesses too.

Now – tell us what you think.

Do you want to know more about Climate Week? The Science Museum is staging a compelling program of lectures and seminars discussing the future of climate change and transport in London.