All this and more has been brought to Londoners by Gingerline, the cult Kiwi-helmed outfit responsible for making immersive pop-up dining a trend set to take over the city in 2013.

“When you’ve got a captive audience, why not give them more than just dinner?” asks Suz Mountfort, the Christchurch-born co-founder of Gingerline.

Along with friends Kerry and Syd, Mountfort has been doing just that, and changing the face of London’s foodie scene in the process.

Here’s how it works: guests book without knowing where or what they’ll be eating.

An hour before dinner starts, they receive a text message telling them where to turn up, with only the guarantee that it’ll be a stop on the Overground, or ‘gingerline’. 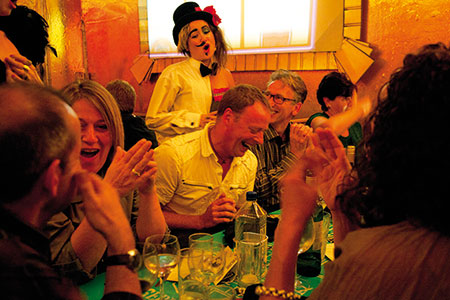 As punters make their way to the secret location, Mountfort and her team will be putting the finishing touches to whatever elaborate concept they’ve masterminded, using performance, bespoke artworks and interior design to create an alternate reality.

This ‘on the hoof’ approach comes with its pros and cons – Mountfort reveals that at one event held in a fancy dress shop, she spoiled the main course in their makeshift kitchen 20 minutes before the guests arrived.

“We thought we had an oven with six burners, but didn’t realise until the night that only two worked,” she remembers.

“But when no one knows what’s on the menu anyway, they can’t be disappointed if it changes at the last minute!”

Crushingly, Mountfort is packing up the project at the end of March to go travelling and then return to Sydney, where she lived for five years before moving to London. 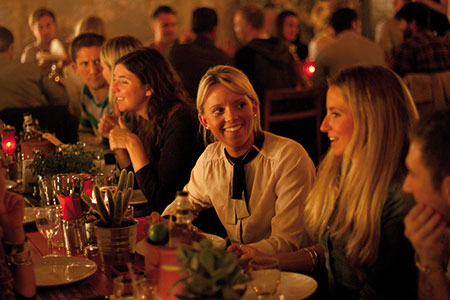 Her plans for the future are fluid: “Maybe we’ll set up a Gingerline thing over there, or there’s the opportunity to bring it back here later in the year,” she muses.

Still, the gap left by Mountfort and co. can be competently filled by The Art of Dining, which has been gathering legions of fans since first popping up 18 months ago.

“We’ve nailed a good formula,” Hodge responds when asked why she thinks the enterprise has taken off so quickly.

“There are interesting locations, theatrical set designs and amazing food, and we really invest ourselves in it.

“We’re not in it for a quick buck, and people appreciate that.” The project has become a full-time job, however.

At the start, Hodge was working as a PA, but got so preoccupied with the event designs she outsourced her job to a friend, who emailed her work over at the end of each day.

She’s since quit as a PA, which she admits makes a lot more sense …Does that whet your appetite for more quirky eats? Read on. 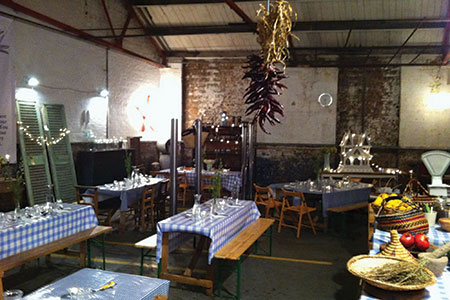 The lease keeps getting extended on this pop-up restaurant set within an old Citroën garage – we assume because it’s so damn good.

The space is sparsely decorated but that’s all part of the charm, and the £30 for three courses Sunday lunch deal – plus BYOB – is a steal.

On the first Saturday of every month, there’s dinner and late-night dancing courtesy of this cracking supperclub – in a secret location, of course, and with DJs playing late into the night.

No word on when it’ll be popping down again, but you’d be a fool to miss out on its experimental tequila cocktails and duck burritos, so be sure to pay a visit while you still can.

You can get in without a reservation (in theory), but be prepared to share a booth with other diners as it gets packed.

A meal with drinks should set you back about £25pp. 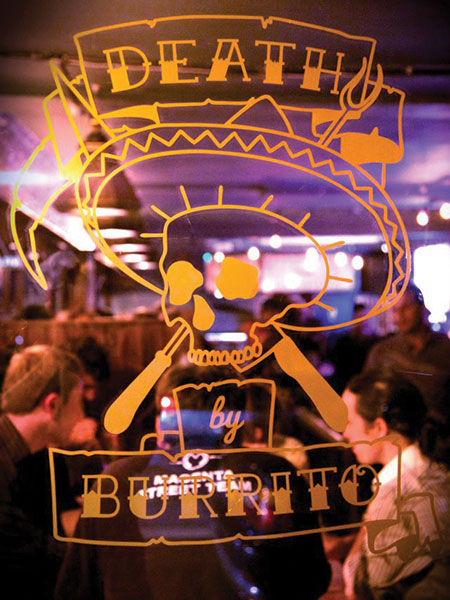 This sometime supperclub has been going for four years now, popping up sporadically to offer a four-course Italian-inspired menu by candlelight. It’s BYOB.

A series of thematic pop-up kitchens, with a different chef each week and accompanying music, guest speakers and digital installations at ‘experimental centre’ Lime Wharf.

If you’ve got a sweet tooth, this is the pop-up supperclub for you.

Appearing in coffee shops across the city now and then, you can try a three-course dessert menu for £20 or a dessert, coffee and petit four for a tenner.

This regular Sunday event serves up two courses and a mystery movie for £15.

This new supperclub launches on Thursday at furniture-shop-cum-cafe L’Atelier Dalston, promising to “contaminate London with Portuguese contemporary culture” – its art, music, design and, most importantly, food and wine. 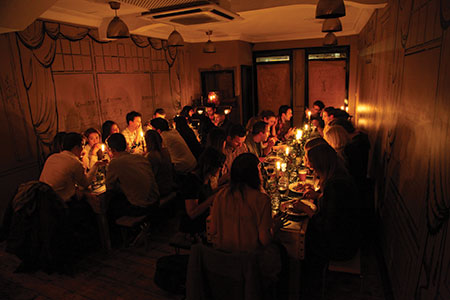 While not strictly a pop-up, this is a meeting of minds borne of London’s pop-up movement.

The Foragers – or Gerald and George to their mums – cook wild food they’ve hunted and gathered, and are now the resident chefs at Dead Dolls Club (above), a former design studio turned pop-up experiential dining outfit that has now opened up a permanent space.

It’s a ‘small plates designed to share’ deal, with the likes of pigeon kebab and BBQ sauce starting at £6.50. 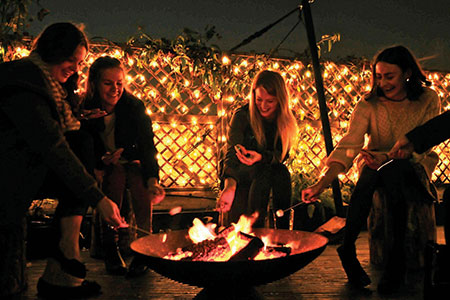 This heated rooftop wigwam at the Queen of Hoxton (above) is a regular winter pop-up offering a cosy setting for some outdoor BBQ action.

Fairylights and a fire pit will warm your cockles as you order up a feast of red meat, from whole lamb, hog roast and haunches of venison to wild boar sausages and burgers, all served with gravy and stuffing.

Even better, you can wash it all down with a toasty tipple, namely their hot buttered rum. What are you waiting for? Get freaky in the tipi.

This rather high- brow dining club invites you to “engage with the ideas of a well-known artist through food”.

The menu is designed bearing the “fundamental, social and intellectual content of the artist’s work” in mind, and the three-course meal is accompanied by a talk about the artist’s work. Er, eek. 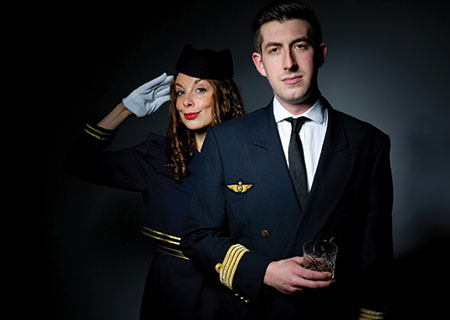 These immersive dining events promise to whisk you away on a ‘city break’, welcoming you first to a ‘departure lounge’ with cocktails and canapes, before you’re taken to a themed dining room and a four-course meal.

This awesome street food outfit is popping up in The Princess Alice pub until March.

Best known for their tear-inducing buttermilk fried chicken, they also do a devastating line in pork belly and rotisserie chicken.

A ‘secret foodie extravaganza’, this perennially popular supperclub, run by ‘the chef and the slave’, offers five courses, a ‘secret dessert’ and good company in a cosy southeast London flat. Sign up to receive updates.

For one night only, this oyster bar will transform into a burger bar,  only the burgers will contain – well, oysters.

The price includes three courses and a glass of red, and sittings are limited to 90 minutes.

This temporary secret cinema in the attic of Beach Blanket Babylon offers a limited number of deluxe meal tickets, bagging you a two-course meal and wine or beer before the screening at 8pm.

The next three events are sold out, but you can join the mailing list to get updated on the next lot. 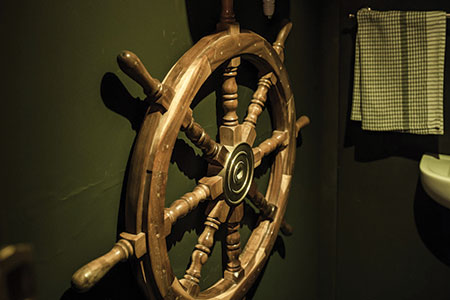 Last but not least, we’ve selected a pop-up that, while it doesn’t include food, is simply too cool to exclude. Patrons enter this temporary rum club via, um, a toilet (above).

Pull the dunny chain and a super-sexy speakeasy will be revealed, with red leather sofas, candlelight, oil lamps and an inevitably achingly trendy clientele all crammed in.

Angostura rum is the drink of choice (well, it’s not really a choice, cos it’s the only drink available). Slated to stay until May.

Nick Griffin will attend Queen’s Garden Party “for the patriots”