It might seem as if Manchester City were picking up their Premier League trophy just a couple of weeks ago, but the new season is a week away, and, after last season’s spectacular climax, it is going to have a lot to live up to.

Will United’s noisy neighbours continue their journey towards success and emerge the dominant force in English football? Will Southampton and the other new boys find a foothold among the elite? Will Joey Barton manage to get through the opening day without acting like a twat and then tweeting about it for no reason?

To find out, there’s no shortage of pubs in London – the capital’s the natural home of the boozer, and you’ll find one on almost every corner of town. What is most striking, though, is the diversity of pubs, bars and venues on offer in which to catch the football.

There are cosy corner pubs, proudly serving up real ale as you gather round the one and only TV screen. And then there are giant sports bars, complete with a hundred screens and pitchers of lager. London, being London, also has pretty much everything in between. 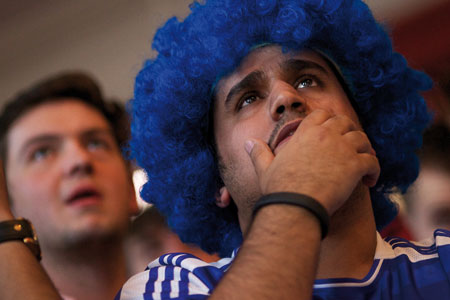 Jetlag, in Great Portland St, prides itself on offering a tech-tastic, luxury venue in which to watch the football, as venue director Scott Wilson tells us excitedly ahead of the new season.

“The Lotus Lounge [the downstairs bar] has a high definition projector that throws onto a 15ft acoustically transparent screen,” Wilson says.

“This is backed up by the 7.2 cinematic surround sound and some seriously comfortable sofas, and we also have two large flat screens on the ground floor with dining tables, too.”

Combine this with a packed house of clamouring fans, and the atmosphere here is electric. Jetlag, though, is not just about its shiny, tech-fest indulgences.

With an array of lagers and cocktail menus to add to its towering cinema screen, it’s a far cry from the traditional ‘beer and a burger’ combo. 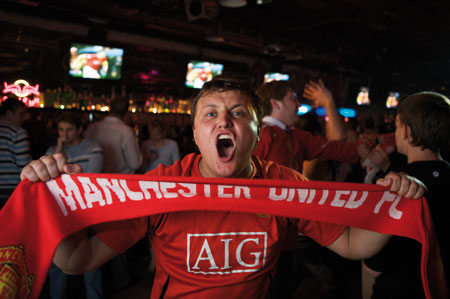 “The food is the second reason [people arrive]. We have a signature menu of international street food, from burgers to burritos, and we have a great variety of fresh food made on site with quality ingredients,” Wilson adds Sports Café in The City offers the sports-mega bar experience, too, with no fewer than 100 screens to make sure you never miss a kick.

But for those seeking a more intimate experience, look no further than any one of hundreds of pubs across the capital, Clapham’s Bison And Bird, for example, an Antipodean fave.

Shoreditch’s Juno offers a bit of class and style in its own, inimitable east London way too, with table service and a ‘no hooligans’ policy. And then you can check out the action in Sky Sports 3D in any number of bars throughout the capital.

After the climactic last day of the season, in which the Premier League moved across Manchester from the red half to the blue in the most dramatic of fashions, you can bet Fergie has been plotting his way to make amends this term. And there’s no better place than London in which to watch this showdown unfold. Bring it on.

Sex and relationship advice at its twisted best

Nudist beach would give a boost to Noosa’s economy