It’s 11am and I’m lying on Tel Aviv’s main beach, nursing a hangover earned the night before in the many bars around the city’s Allenby district. As I lie softly groaning on the edge of the Mediterranean Sea, trying to block out the Hebrew squawking of a persistent ice-cream seller, a squadron of jet fighters roars overhead to perform stunts for an appreciative crowd in a display of military might. It seems wherever you go in Israel, reminders of the state’s precarious position, slap-bang in the middle of an Arab world, abound. However, while you can’t avoid it, there’s plenty to take your mind off a conflict that will probably never be resolved.

Twelve hours earlier, at our hostel in downtown Tel Aviv, my travelling companion, Ryan, and I run into an American, the shaven-headed Jordan from Colorado. His US Marines T-shirt is no fashion statement – he was part of the corps but left the States to take advantage of his Jewish ancestry and live in Israel. “The Israeli girls, man, they’re hard to crack,” he confides. “You’ve got more chance with the Russians. Don’t get me wrong, the Israelis know how to have a good time but they can be snobby with it. I gave up on them. It’s Russian all the way for me now.”

A night on the tiles

With Jordan’s sterling advice and a list of bars to hit, we venture out into the city night. Tel Aviv’s nightlife doesn’t even start warming up until 11pm but when it does, you’re in for a treat. We spend the night and early morning in a host of pumping bars, from the cleverly disguised Deli Bar, which you have to access through an actual deli, to Cheers Bar, which throws up all manner of rock tunes from Pearl Jam to Tool all night long.

The super-hip, hard-to-find and underground – literally – Radio Bar is the pick of the bunch, with a live soul-funk band, enormous bar, and surreptitious spliffs doing the rounds. The locals are friendly, welcoming and interested without fault, the girls included. At 4.30am, we stumble back to the hostel, past kebab and pizza vendors, to crash out, dreaming of the olive-skinned brunette beauties we’ve met. Outside, people are still going strong. They may be living in the shadow of war but that doesn’t stop them enjoying life.

The next morning, after the aforementioned beach-based self-pity session, we catch an hour-long bus-ride to Jerusalem. Having rocked up to Tel Aviv without a hostel booking, we figure we can do the same in Jerusalem. But due to the religious holiday Sukkot, there’s no rooms at the inn and we’re forced to stay in Wadi al-Joz, an Arab neighbourhood on the east side of town.

We don’t mind, but getting lost late into our first night reinforces the old travelling adage of remembering landmarks. We muddle through dark streets with signs written in nothing but Arabic and locals without a word of English, just unhelpful shrugs and resentful stares. Israel’s never easy, but if we wanted easy we’d have taken a package holiday to Bali. Even on the taxi ride there, after some aggressive bartering, our Arab driver feels it’s fit to tell us about the state of the nation.

“Look, we hate them and they hate us,” he explains of Israel’s Jews. “But we get along because if we don’t, it will be World War III and nobody wants that.”

Just then, a bus full of Orthodox Jews glides past, its occupants looking serious and pious in their suits, beards and pigtails. Our driver glares at them, shakes his head and sighs. We change the subject, talking about London, and his mood improves. Note to self: try to avoid talking politics. 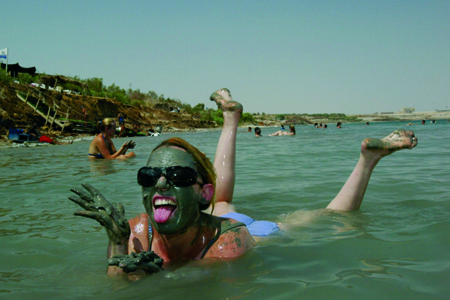 Twelve hours later, within the walls of Jerusalem’s Old City, it’s good to see that the Jews, Arabs and Christians manage to exist in relative peace among the labyrinth of streets. Pilgrims mix with holy men, tourists with locals selling food and crafts. Every turn offers something new; another spicy food aroma, another colourful character jangling trinkets.

We follow the trail of Jesus’s crucifixion walk, ending up at the Church of the Holy Sepulchre, the spot where Christ is believed to have been nailed to his cross and then later laid to rest in a nearby tomb. Christians quietly pray in anticipation of their messiah returning while tourists snap pictures of the impressive Ottoman baroque architecture. Outside, no one bats an eyelid when we play with life-size crucifixes, lugging them on our backs as a group of Indian tourists takes photos.

Over at the sacred site of the Wailing Wall – the remnants of the ancient wall that surrounded the Jewish Temple, God’s supposed footstool on Earth, and one of the most holy sites in Judaism – thousands of Jews of all ages, mostly dressed in the black religious attire of the Orthodox sect, line up to take their turn to touch it. Speaking in Hebrew and reading scriptures on their approach up to the wall, the worshippers creep closer as the midday sun beats furiously down upon their black hats. Some bury their noses in the stacks of religious tomes that lay upon lecterns.

Although not a believer, I inch closer to see what the fuss is about and realise how it got its nickname. Hundreds of men  – there’s a separate section for women – are openly sobbing, mourning the Roman destruction of their ancestor’s holy site in 70AD. The wall’s cracks are filled with scraps of paper containing prayers. I think about making a wish for world peace but then realise it won’t happen, so save my breath for the winding journey back through the streets to our hotel. 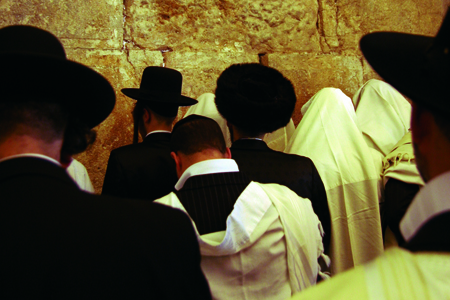 Where it all began

To come this far, especially after a stay in the Arab quarter, and not take the opportunity to go to Palestine would be a waste, but after our midnight wanderings among the locals, there’s no way we’re doing it alone. Tour buses travel to the border with regularity so we jump aboard one and snake our way towards another wall, this time the 8m-high West Bank barrier.

On the Israeli side, it’s cold and clinical, a solid grey barricade keeping terrorism at bay. However, after we’ve passed through the checkpoint in Palestine, leaving our Jewish guide behind, it springs alive with colour – the result of layers of graffiti thrown up over the years by the Palestinians. Vibrant splashes of spraypaint combine to create humans dressed in hearts; messages imploring the reader to “break through this wall”.

“Outside Israel, inside Palestine,” our driver says, as we speed past the wall. And then to reinforce there’s no ill will here, he says: “I am Palestinian. I welcome you.”

He casts one hand out the window while we tear along the uneven road. “It’s very safe here,” he promises. “You could sleep in the street, no problem.”

We wind our way through the busy streets of Bethlehem to the Church of Nativity, the site claimed by Christians to house the birthplace of Christ. The guard at the exit of the Altar of Nativity has a little scam going, where he takes a ‘donation’ from guides in order for ‘clients’ to enter the exit and avoid the hour-and-a-half-long queue.

After a nod to the guard, we’re in, sneaking behind a curtain and down a narrow flight of stairs to a cramped room where Christians get down on all fours to plant their lips on a silver star. Centuries of good and bad carried out in one man’s name all started here. Whatever your beliefs, you can’t help but marvel at the legacy that stemmed from this very spot.