Drinking in Darwin, one season at a time

The first time I went to Darwin I flew from Sydney, and the Territory’s capital felt like a hick town. All I could see were beer-bellies and beards. The second time, I arrived by car, at the end of a 10-day cross-country drive from Cooktown, and Darwin seemed like a metropolis of millions, an oasis of sophistication, a hub of commerce. The city hadn’t changed – surely not much, anyway, in just six months – but my perspective had. Fly there from another big city and there’s a danger you’ll be underwhelmed; drive there and you’ll be amazed at what’s on offer. After all, you’ll have just spent days looking at nothing. Very cunning of the city fathers to make Darwin seem bigger than it is by positioning it a million miles from anywhere. Very cunning, indeed.

Half the population of the Northern Territory call Darwin their home. That adds up to a whole 106,000 people. Not many for a state capital, but that’s all part of the city’s charm. One minute you’re playing blackjack in the casino, the next you’re chatting to strangers in the supermarket. It’s the old big-town-small-town trick. Works every time.

Darwin’s obviously a great base from which to explore Kakadu and Litchfield national parks. It’s also a great little city in its own right, and contrary to what you might have heard, there’s more to do than visit a croc farm and feed the fish. The markets are excellent, too — what with the Sunday morning session in Nightcliff, Saturday morning in Parap, or Thursday night at Mindil Beach, there’s some serious bargain-hunting to be done around town.

Even if you’d rather go to the dentist than go shopping, Mindil Beach is well worth a visit. Darwin’s proximity to Asia is reflected here, with inexpensive food from all over the continent and beyond on offer, as well as funny-looking boys juggling fire and all that kind of thing.

Some might say the only culture you’re likely to find in the Top End is in the yoghurt, but other ways of taking advantage of the tropical nights include the Deckchair Cinema, and an outdoor classical concert season courtesy of the Darwin Symphony Orchestra.

Those expecting to encounter a location as culturally desolate as it is geographically remote may be surprised,
as there are art galleries, theatres and museums here, too.

But, of course, it’s not all diletantes and wine bars either. Crocodiles like it up here, too. 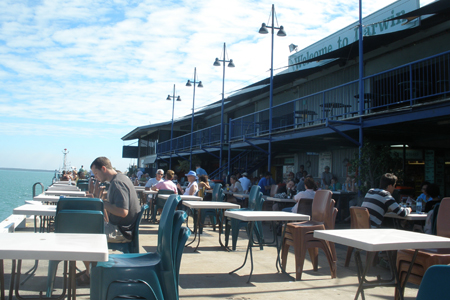 “When we go fishing around here we take our dog. Crocs prefer dog meat to people meat,” says Greg, our guide on a Mary River cruise. Hmmm, sensible, if you don’t like your dog much. Crocodile cruises are popular up here – everyone wants to see one of these famous Top End creatures, but no-one really wants an impromptu encounter. Much better to view these monsters from the safety of a boat. Preferably a big boat.

Perhaps the most famous croc encounter out of Darwin is the jumping croc cruise at Adelaide River. There, they dangle chickens over the side of the boat for the massive animals to lunge at, leaping right out of the water for their lunch. It’s a dramatic sight.

Here, at Corroboree Billabong, the crocs don’t jump, they just swim and lounge about and lie on the banks with their mouths open. You know, they’re just hanging out doing their usual crocodile stuff. They are still a dramatic sight though.

Generally speaking, you don’t need to worry about crocs in the Top End. Yep, there are lots of them and yes, they’re pretty big and scary-looking. But attacks on humans are rare and if you obey the signs and don’t go leaping into any old body of inviting water, you should pretty much avoid becoming lunch. 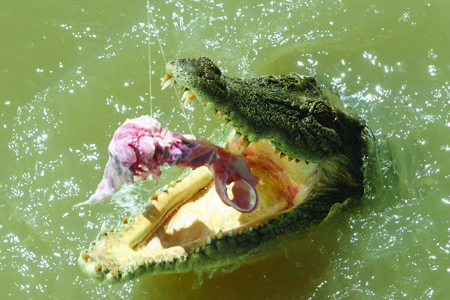 Darwin’s great outdoors can be sampled for free by strolling through the Botanical Gardens, or heading down to the beach. Whether or not you’ll want to risk having a dip after having had a close-up look at those crocs, though, is another matter altogether.

Flattened twice in its short history – by the Japanese in World War II, then by Cyclone Tracey on Boxing Day, 1974 – Darwin has rebuilt itself and carved out a unique identity.

The locals tend to be very proud of their city – of its melting pot of cultures, its ever increasing sense of modernity and sophistication, its friendly residents and its eventful history. They also revel in what they call the ‘tropical lifestyle’. What that basically means is that it’s laidback and it’s got great weather. The year is divided not into spring, summer, autumn and winter, but into three seasons: the Wet, the Dry, and the Build-Up.

Everyone loves the Dry. While Sydneysiders are shivering in front of their little electric heaters, Darwinites are sitting on their verandahs at night in shorts and thongs. The days are sunny and warm, and rain is unheard of.

The Build-up starts late August. As temperatures start to rise, so does the humidity. People become sluggish and those backyard swimming pools come into their own. It’s also a time when some people are prone to have “gone troppo, mate”. Which means going a bit loopy.

The occasional thunderstorm signals that the onset of the monsoon is not far away, and the clouds loitering menacingly on the horizon provide dramatic sunsets.

When the Wet does finally sweep in over the Arafura Sea, it’s a relief. Not only is rain better for the nerves than high humidity, but the parched land gets a new lease of life, with grasses and palms and all manner of green things undergoing growth spurts, transforming the Top End. Whatever time of year you go, give Darwin a while to grow on you. It’s the kind of place that does.

There’s some lively nightlife out here too – and it’s mostly within staggering distance of the backpacker strip, Mitchell Street. If you ever feel guilty about going out too much, just remember that Darwinites are supposedly the heaviest drinkers in Australia.

It wouldn’t be right not to join them. “When in Rome,” is the stock answer if anyone accuses you of overdoing it.

This is, after all, the city which hosts the annual Beer Can Regatta (July), where participants take to the seas in boats made from empty beer cans.

The Regatta originally started once Cyclone Tracey left town. The tradesmen employed to rebuild the town drank a shedload of beer due to the tropical climate and many an empty can was strewn across the street. The Regatta was started as a means to get rid of the rubbish. Now that’s the kind of community spriit that’s worth drinking to.

May day protests expected across Europe in opposition to austerity measures

Parkway Drive hit the UK for 6 dates in December