Top lady Koninginne, or Queen, has given up her position on top of the throne to hand it down to a ‘new generation’, her eldest son, Mr Willem-Alexander. Or at least so she says.

Her mother abdicated at 71 and her grand-mother at 68. Frau Koninginne abdicates at 75. Hogger? Maybe not.

Beatrix was incredibly popular during her reign, people from all over the world gathered to celebrate her birthday in Dam Square year on end, dressed in orange and drinking Grolsch.

Every year special cleaning services were employed to make sure the city goes back to its normal self. This year it’s an even bigger event bearing in mind the Dutch Kingdom hasn’t seen a King in over a hundred years. 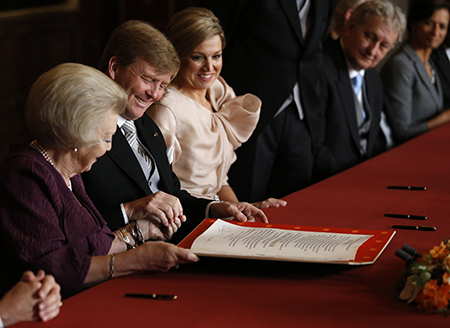 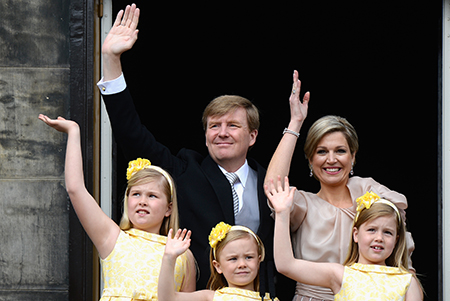 Willem-Alexander and his family

The whole airspace above Amsterdam has been shut off for three days and more than 10,000 uniformed coppers rummage the streets, making sure things run smoothly. Sniffer dogs and all.

Tonight the Royals will be celebrating too, with a huge water pageant and a guest list including Prince Charles and the Duchess of Cornwall. The Danish Crown Prince and his wife are also invited.

Limosines and tainted windows all over the shop. Even the Japanese Royals are attending. They haven’t been on an official visit since 2002 when they went to visit New Zealand and Australia. Knees up, it’ll be a sizzler.