Rebecca Black, of dubious Youtube fame, has followed her first single Friday with a new track, My Moment, and again the song is stirring up furious debate across the web.

Black became infamous for Friday, which was labelled the “world’s worst song” by many and spawned numerous spoofs. Despite that, Friday was watched more than 160 million times on Youtube.

Black was not without her supporters, Lady Gaga included, and Friday was covered on Glee. The 14-year-old also appeared as herself in Katy Perry’s video, Last Friday Night.

Now Rebecca Black is back with My Moment, written by Brandon 'Blue' Hamilton, who has penned songs for Justin Bieber.

The My Moment video doesn’t appear to be breaking any preconceptions people may have about Black and features the teenager sitting in a limo with her mates (and mum?), having her hair done and spinning in a circle blowing bubbles.

The world has been eager to see what Black could do to top Friday, however, and when she announced her new single on Twitter, the video became temporarily unavailable on Twitter due to the number of people trying to watch it.

Black tweeted saying, "so there are SO many people are trying to watch #mymoment all at once, which is why it says the video is unavailable!): it'll be up soon!." 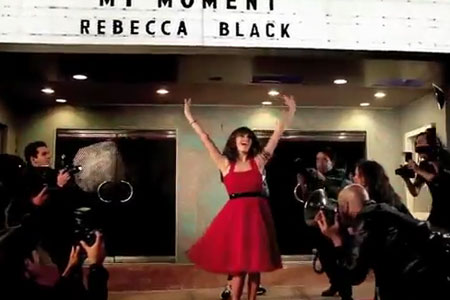 Black’s new single has been met with mixed responses on the blogosphere.

“You know, I must admit that Friday wasn't the best start in the music career, but My Moment must have put many peoples faith back in you. Good job!” wrote 70K361.

And XLolliies said “Rebecca, you are awesome. Don't listen to the haters, they don't know what they're talking about. You are a talented singer and your following your dreams, that's the type of people we need in this world 🙂 Keep trying and goodluck, i'll always be cheering for you.”

However others have been less generous.

“Really? So are you guys retarded or just stupid? For those of you who have never listened to music in your entire life, its not her singing voice. Its called autotune. Its professional studio adjustments, like legit autotune, not T-Pain autotune. Have you ever listened to Jason Derulo live before? He can't sing for jack shit, his songs just like this one are studio adjusted. She's still terrible. These lyrics are still as deep as the shallow end. Bad all around,” wrote Kylelewiinsky on Youtube.

Kitesurfing in Camber Sands: Who needs speedboats when you can glide by kite?