Just hours after legal documents were leaked saying South African Arthur wants $4m in compensation or his job back after he was replaced by Darren Lehmann 16 days from the first Test, and that there was in-fighting in the squad, the Aussies were greeted at Australia House by dignitaries and media.

Captain Clarke, suited and booted with his teammates had a chance to respond to a formal address in front of the Australian High Commission officials, former PM John Howard and cricket royalty Richie Benaud.

He took the opportunity to show how well he thought the Aussie team got on with a larrikin speech in which he introduced his players one by one and embarrassing them with an insiders view of the side more akin to a 21st birthday or best man speech.

It could have gone two ways, as his teammates weren’t in on the joke, but the crowd loved it.

“We had no idea he was going to do that,” Shane Watson told the Daily Telegraph, adding he got off lightly.

In the speech, he said the loss at Trent Bridge has spurred them on even more.

“I guess that’s probably given us more excitement to look forward to playing at Lord’s,” he told the audience.

“There are a lot of guys on the Australian team who haven’t had the opportunity to play a test match there at Lord’s and I know they are really looking forward to getting out there for the first time.”

Then he launched in and stole the show.

“If the boys don’t mind, and they don’t know this is coming, I’d like to call them up one by one and just put a little dirt on them as well,” he said.

Then he ripped through his side one by one, staring with the absent Brad Haddin who was “still hung over from the other night drowning his sorrows from losing the first test match”.

Opener Chris Rogers was the “team nerd, he enjoys long walks on the beach, coffee movies and dancing … on his own”

Shane Watson, who is apparently not Clarke’s biggest fan if you ask Arthur, was referred to as “Mr Guitar Hero because every time you are walking down the corridors of your room he’s always on his guitar. One thing you don’t know about Shane is one day he is a cricketer but tomorrow he could be in The Rolling Stones”.

Steve Smith was “obviously one of the good looking roosters in our team” while Mitchell Starc “learned his left-arm in-swinger from [girlfriend and Australian women’s wicketkeeper] Alyssa [Healy] in the backyard at home”.

Peter Siddle was moved to try and take the microphone from Clarke when he was described as “the Vegan of our team whose favourite meal is soft-shell crab”. 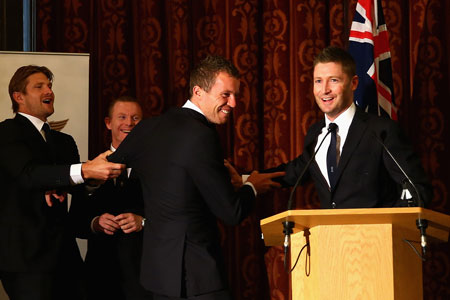 James Pattinson likes his mirror, big strong quick Ryan Harris is a “scaredy cat” and spinner Nathan Lyon “is in love with Brad Haddin and was a state netballer in school”.

As for Matthew Wade, David Warner [who is in South Africa with Australia A but considered part of the squad], Philip Hughes and Usman Khawaja, well, “They are called team One Direction”.

Irony came with newbie Ashton Agar’s ribbing after the humble 19-year-old starred in his debut.

“And our last player, what can I say about him, the man of the hour Ashton Agar is great at everything and if any of you have some spare time tonight he will be more than happy to tell you about it,” Clarke joked.