Rebel rainbow crossings spring up in Sydney and beyond

Enthusiasts of the rainbow crossing haven’t let it go down without a fight however.

Since the tarmacking of the crossing, ‘rebel rainbows’ have started popping up throughout Sydney and the rest of Australia.

The movement gained momentum through social media sites, particularly Twitter and Facebook and has since spread to become something of an international phenomenon. The furthest rebel rainbow was recently reported in Nairobi, Kenya. With any luck they’ll continue to spread.

The Facebook group, DIY Rainbow Crossing has over 13,000 likes (and growing).

With Sydney’s huge LGBT community in the area around Taylor Square, the removal of the Rainbow Crossing seems rather aggressive. 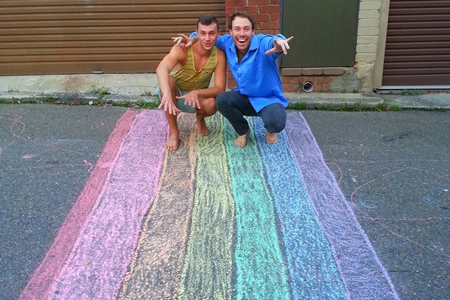 The NSW Roads and Maritimes services decided to tarmac over the Rainbow Crossing as it was claimed to present a safety issue. Even the seemingly harmless chalk rainbows can’t seem to exist in peace though, as one Twitter user reported that Ashfield city council had workers hose the chalk off the pavement.

One has to ask whether the rebel rainbows really pose a threat to public safety or if the NSW Road services are simply trying to make people forget there ever was a Rainbow Crossing. Do you remember chalking up the pavement outside your house as a child? Would the council waste time removing that?

Despite 15,000 people backing the Rainbow Crossing, the NSW Roads and Maritime Services seem to have won this battle.

But with rebel rainbows, perhaps they will not win the war.