Vivienne (Driver) is a new teacher in the valleys during a hot summer of 1976. Goaded by her colleagues for her liberal ways, she stages a rock’n’roll version of Shakespeare’s The Tempest (Bowie, Electric Light Orchestra) to help the kids express themselves. Only she finds hormones and the lido stand in her way.

There’s the boy with the eyes that smoulder who’s in love with the ‘school bike’; the school rock band whose guitarist is secretly dating the bassist’s younger sister; and a troubled young soul with a skinhead troublemaker older brother who is set for the same path of destruction.

Evans juggles these numerous characters deftly, ensuring they all get their spot in the limelight, and their back stories are told with empathy as Evans draws on his own Seventies school years to great effect. He finds the humour in the period’s fashions and opinions – the fascination with a fridge freezer and stocking it with ice pops – but never at anyone’s expense, and the songs are played straight rather than adopting any post-modern knowing, winking Glee-isms.

Driver embraces her role – and accent, which wobbles only occasionally – which is shaded with all manner of greys, and the young cast shine, particularly Darren Evans, as the misunderstood boy from the problem family. As a rites-of-passage tale, it’s heart-warming and sidesteps any ‘motivational teacher’ movie clichés.

Good for: Remembering what it was like to be a teenager

ALSO OUT NEXT WEEK… 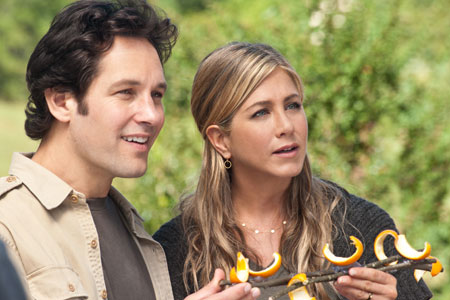 Jennifer Aniston and Paul Rudd star as a warring couple who, after financial crises lay them low, end up in a hippie commune where they learn a few things about life, one another, and free love of course, too. This comedy, from the director of Role Models, looks to meld the smutty with the schmaltz, and the charisma of its two leads will determine whether it succeeds or not.

On general release from Friday March 2

Heatwave ahead for Vic, SA and NSW

Peace, love and paganism: Celebrate the summer solstice at Stonehenge