Review: The Set Restaurant at The Artists Residence, Brighton

I tried it out last week and on arrival was pleased to find the place looking more like the inside of a Hoxton art gallery than a small seaside hotel. The recently launched cocktail lounge, The Fix, was previously a locals’ favourite known as The Cocktail Shack and now displays bold modern art on the walls to admire whilst you sip your drink and study the menu which comes presented inside a hardback copy of ‘Alice’s Adventures in Wonderland’. My partner and I sat under a washing-line made from neon-lit tubing, complete with drying electric underwear, whilst we knocked back our Beet Collins and Carrot Sour (both £8.50). Sergio the barman adds a bit of pizazz to his creations by using The Fix’s own tinctures and spices such as cardamom and black capsicum for an exotic edit of standard cocktails. 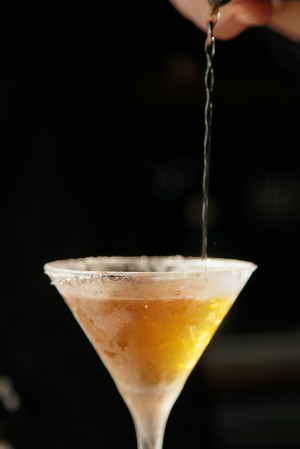 The Fix cocktail credit: The Fix

There are two options for eating at The Set: either a choice of three fixed price menus (£40-£45) with wine flight (£30) or a more casual selection of small plates, cold snacks and sharing platters which, being Brighton, feature plenty of vegetarian options to choose from. We went for the latter and kicked things off with trout pastrami served with fennel and orange, and a mini-charcuterie from Kent-based Moons Green Farm served with sourdough and kimchi dip. Luckily, the fennel was thinly sliced enough not to overpower the delicate flavour of the trout. The portions were just large enough for two people to enjoy and good value at £4 each, so we thought it a bit mean when, on asking for bread to accompany the charcuterie, we were charged £2.50 and brought just one meagre slice of sourdough. This minor sin was quickly forgotten though as we tucked into the next dish, and highlight of the meal: pig cheek with hummus — an unexpected but perfect combination of textures and flavours. These were followed by honeyed artichokes with horseradish and three plump haddock croquettes, ideal for dipping into the chocolatey-brown squid taramasalata that accompanied it. We rounded off dinner with a delicious squid bun with roasted garlic aioli and a handful of local Alexander buds in hollandaise. Withe an interesting flavour something like a spicy sprout, we were lucky to catch these on the menu just before they went out of season. Nearly tempted by the British cheese board with quince and crackers, we finished instead with another round of Sergio’s alcoholic concoctions — this time a Fresh Collins made using spiced Barber’s gin and a highly refreshing Green Spritz with tequila, spinach and fennel.

The Artist Residence is placed perfectly for a relaxed, easy dinner in cool surroundings after a day on the beach or a visit to the i360. Chef patron Dan Kenny plans to open an outdoor terrace later this year in the restaurant’s herb garden so we’ll certainly be returning for some summer tapas at sundown and another cocktail or five!

The Set and The Fix at Artist Residence Hotel

Struggling to get healthy? Try these quick fixes…