A student, who was captured on video being mugged by the rampaging thugs during the London riots on Monday, has attracted a groundswell of support from well-wishers.

The video, posted on You Tube, horrified the world whose focus has turned on the destruction blighting the UK. More than 20 million people have viewed the clip and now an internet campaign aims to compensate the Malaysian student for what he went through.

Ashraf Haziq had his backpack picked during Monday's riots in Hackney, east London.

The video shows him lying on the ground, stunned and bleeding from the impact of a missile to his head. Several young men gather round him and one of them helps him to his feet.

The student staggers slowly away, clearly still dazed, supported by an apparent good Samaritan. He then stops, and as he does, another of the young men unzips his backpack and begins to rummage inside. His intention appears to be remove anything of value.

The youth who has helped Ashraf to his feet then also decides to help himself to the contents of the backpack.

At this point a third man arrives on a bike and lunges towards the backpack, followed by a fourth and eventually they are all swarming around him.

The young man who first put his hand into Ashraf's backpack then strides away, discarding most of the contents. The footage ends with the Malaysian student, clearly still stunned, staring across the road, alone. 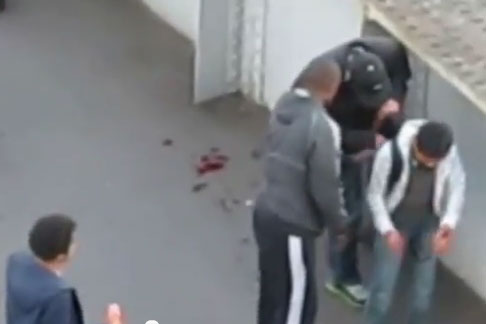 Ashraf is now recovering in hospital after undergoing an operation on his broken jaw. He plans to remain in Britain despite his horrific ordeal and family pleas for him to return home.

Another YouTube video shows him describing, in his native Malay tongue, his experiences Hackney.

"I was cycling with another student to visit a friend when a gang of about 20 came towards me some had knives. The youngest looked like he was primary school age. They came in a group, they didn't attack at first, they wanted the bicycle.

"And then there was someone who put a hand in my pocket to take my phone. He pulled the bicycle and I don't know what happened, I fell, and my mouth was bleeding, so maybe I got hit."

Asyraf went on: "Then everything is a blur – I fell down.

"I was bleeding from my mouth and thought some people were coming to help me. But they were from the same group. They took my PSP and a container you can see a man in the video throwing away.

"The video has been seen by lots of people. I want to thank them for their support.

"I want everyone to know, these people may steal my things, they won't break me."
Asyraf, who lives in Barking, East London, has been in Britain only a month after coming to study accountancy.

He is one of eight students on a Malaysian government-backed scheme.

But his family still had to save for years and borrow money to fund his dream.

Speaking from the family home in Klang Valley, Malaysia, teacher mum Maznah Abu Mansor, 47, said: "When I spoke to him I told him to come home. But he wants to finish his studies. He is not willing to come back. He told me it's an experience – that he needs to be more careful."

The You Tube video has given rise to an internet campaign attracting expressions of revulsion at the incident.

Jamie Cowen, a former Save the Children worker, has set up a website where people can donate money, via PayPal, and vote on what should be done to assist Ashraf.

Some have suggested paying for his student fees, his dental costs, or flying his parents to London to visit him.

A variety of donations to Ashraf have also been forthcoming. Gifts promised so far include a bicycle from Bigfish bikes and a PlayStation plus PSP games from Sony.

"I was very lucky in that I had an idea that I could do something about relatively easily,” Cowen told Channel 4 News.

"Apparently Ashraf lost his PlayStation and his bike when he was mugged. I also believe he lost his mobile phone. I think another network have managed to get him a phone.

"The whole of Britain has just come out and said they really feel for this lad. This is a chance for Britain to demonstrate they didn't want to see these images flash around the world in their name. We're a good bunch of people, by and large."

Cowen was also keen to stress that any money donated will go to Ashraf Haziq.

"I can't say exactly how much is in the PayPal account at the moment.

"There are a couple of charities who've come forward and said they'll act as guarantors to ensure the money donated online is transferred in the direction it was intended.

"I give my word that the money that’s in there will be treated properly and it will go where it's intended."

Prime Minister David Cameron was left shocked by the attack.

He said: "When we see the disgusting sight of a young man with people pretending to help him while they are robbing him, it is clear that there are things badly wrong with our society."

Stars turn out for ARIA Awards

A weekend in LA, California: Sun, stars and shopping