Riots in Rio: One million people protested across Brazil last week – why were they so angry?

The demonstrations, which started in Rio de Janeiro and then swept through the country’s major cities, were sparked by the rising of a bus fare by BRL$0.20 (6p), but soon came to represent a host of growing frustrations. At their core, the Brazilian public is asking why, when their public services are suffering, the government is spending big on major sports events, such as the 2014 World Cup (£15bn) and the 2016 Olympics (£9bn).

Just prior to the outbreak of discontent, filmmaker Carla Dauden posted a video outlining much of what the average Brazilian is protesting. The clip, titled No, I’m Not Going To The World Cup, has been watched two-and-a-half million times.

Dauden says: “Some politicians argue the World Cup and the Olympics are the incentive our country needs to get better. So wait, what? We’ve been paying taxes all these years for what? What country needs an incentive to look after its people? Suddenly there’s all this money to build stadiums…. We don’t need stadiums, we need education. We don’t need Brazil to look good for the world, we need healthcare.” 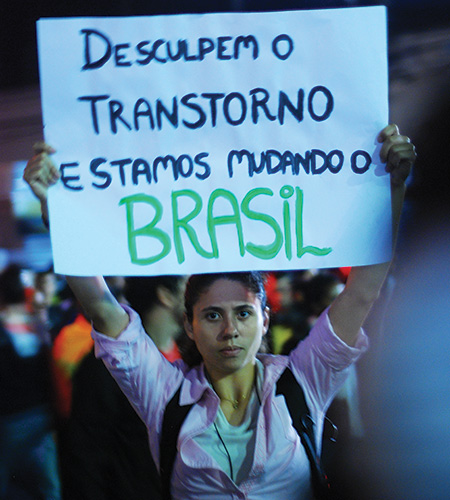 Rio-based Londoner Matthew Richmond was moved to join locals in the streets and says reports of violence are exaggerated. ”The mood is of jubilation, unity, relief. A lot of people have been waiting a long time,” he tells TNT. “The protests are as you’d probably expect – 95 per cent are peaceful. Remarkably so, in fact. The amazing thing is that the efforts of some to discredit the protests due to the violence isn’t working.”

BBC economic editor Paul Mason has drawn a parallel between the protests and the Berlin Wall’s fall: “Just as in 1989, when we found that people in East Europe preferred individual freedom to communism, today capitalism is becoming identified with the rule of unaccountable elites.”Here are the main issues for protesters.

There was great joy when Brazil won hosting rights to the World Cup – it seemed deeply fitting for a nation that has arguably contributed more to the world game than any other. But the upheaval required for a wide-reaching infrastructure development scheme has caused problems.

“The World Cup and the Olympics have been generating very problematic processes – forced removals and an increase in living costs in particular cities,” explains Dr Magalhães Wallace, a Cambridge University research associate whose recent work has centred on urban transformation, security and violence in Brazil.

The huge stadium-building programme required began in earnest with many being constructed in remote locations. The Amazonia Arena, for example, is a 46,000-seater stadium being built in the remote city of Manaus, surrounded on almost all sides by at least 600 miles of unbroken rainforest. The local football team rarely sees crowds of more than a few thousand fans. “These stadiums are going to cost millions to maintain after the World Cup,” Dauden says. 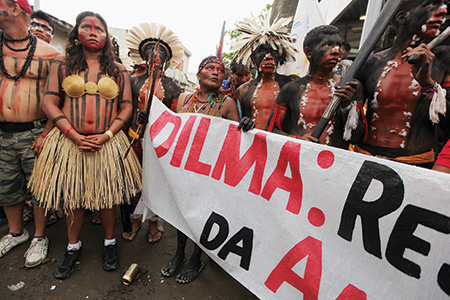 In 2010, a video of a doctor in a moment of anger at one of Brazil’s small public clinics went viral. The clip crystalised the discontent felt by Brazilians forced to rely on an abysmal public healthcare service. Standing at the door of a tiny, dirty clinic, she says: “I am a doctor, I am revolted, I am alone in this crap here. There is nothing I can do for the excess of sick patients, and the secretariat, the governor, they don’t do anything.”

“Brazil has become much richer over the past decade, but public services have not improved,” Richmond says. “I think it is about the money that has been spent – many feel misspent and misappropriated – by various levels of government and capitalist construction giants.”

Brazil has the highest HIV rate outside Africa, and an infant mortality rate of 20 per 1000 births, way above the average of 4.5 in most Western nations.

Many protesters feel the World Cup and Olympics are being used to ‘announce’ Brazil’s arrival on an international stage, and their anger is also focused at the organisations behind these events.

“There is a great deal of antagonism toward a political class that is perceived to be nepotistic, self-serving and generally divorced from the citizenry,” Dr Magalhães Wallace explains.

“The World Cup and Olympics are incredibly anti-democratic institutions,” Richmond adds. “FIFA and the IOC [International Olympic Committee] form agreements with (in the case of Brazil at least) an elected government, but the contents of that agreement are never up for public discussion. They place extremely high, one-size-fits-all demands on the host nations regardless of local circumstances.” 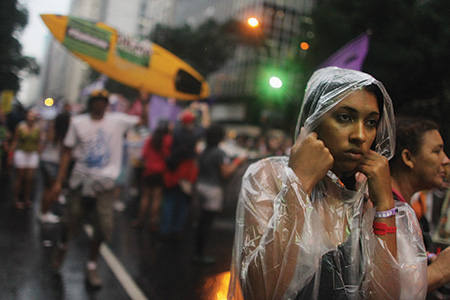 The Brazilian government has been accused of what some call a ‘stick and stick’ approach to rehousing and quelling protest around the development necessary for the Games.

Some claim the government is using extra-judicial justice to remove alleged gang members from neighbourhoods and hold them for an extended period without charge and convicting other people on scant evidence.

More worrying for Richmond is the displacement of the defenceless. He alleges some tribes-people were forcibly removed from their homes to make way for a sports museum. “Genuinely unique places have to be removed to make way for identikit consumer spaces,” he claims.

Dr Magalhães Wallace says this is representative of the wider issues: “How powerful and vivid an image this is – one that captures the paradoxical nature of the projects.”

Dad forced to deliver his own son, in a hospital waiting room