Roll up! Roll up! The TNT team runs away with the circus and puts their physical limits to the test

You’ve seen how hot the circus performers hitting London this summer look, and it’s no wonder – you need to be at your physical peak to achieve their amazing feats.

Coincidentally, ‘physical peak’ is a phrase often associated with the TNT team, so we headed off to the Big Top to try out some circus skills of our own. 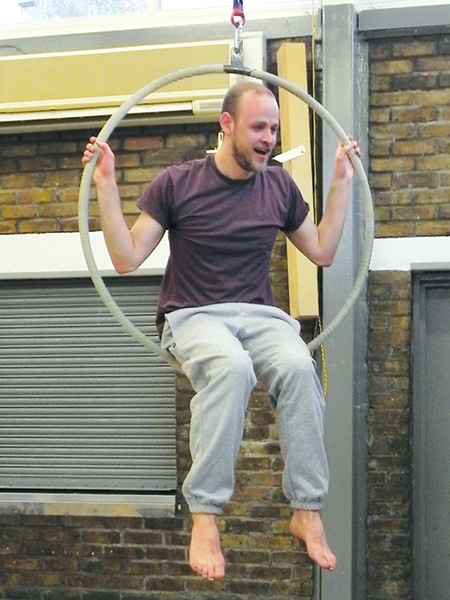 My class with Flying Fantastic at The Wilditch Centre in Battersea begins with a brief demonstration from our veteran instructor Julia, who gives the majority of her instructions hanging upside down, an unexpectedly effective method of communication; it’s hard not to pay attention to what an upside down head is saying to you.

We are taught the correct way to mount the ring, which I am able to execute at the second attempt with something approaching a crude parody of competence. It soon becomes apparent (as I slap down on to the crash mat) that this class rewards a different kind of physical ability to the Sunday league football I’m used to; it’s all about control and static strength.

“The hoop is the glamour piece in aerials,” says Julia, as she surveys her earnest charges, some of whom seem to be doing their level best to sully this reputation. It would be fair to say that the learning curve is fairly steep, but by the end of the class, several of our group are mounting the hoop with genuine grace. 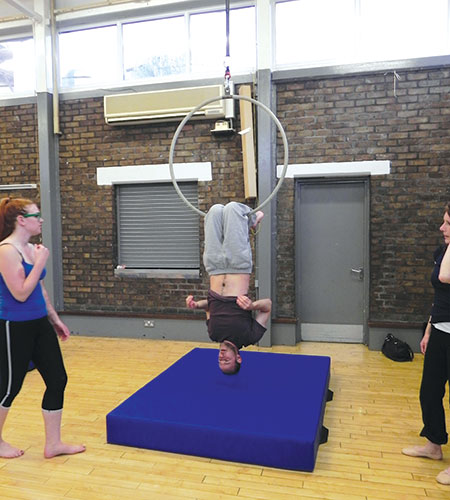 By the end of the hour I can execute a split mount (getting into the ring with lots of upper body strength and flailing legs), the nest (hanging upside down in the hoop in a star shape), and a pike dismount without embarrassing myself too much.

Ready to run away with the circus?

The extent of my exertion becomes obvious a couple of days later when my abs, from whom I’ve been basically estranged since 2002, make a dramatic reappearance, aching in my abdomen. That said, I can think of fairly few full body workouts I’ve enjoyed more. If this is what circus life is all about count me in.

Christopher Wigan, ringmaster and founder of Flying Fantastic, confirms that aerial fitness is a full-body workout. “Arms, wrists, forearms, shoulders, glutes, quads, adductors and abductors, calves and ankles are all hard at it,” he says.

“As if that’s not enough, it’s an amazing workout for your back and your abs and it strengthens your core as you work. Aerial fitness literally targets your entire body and the best part is that you get to have fun while you do it!”

Do it: Flying Fantastic offers 90-minute lessons in aerial hoops at sites in Battersea and Farringdon every week for £20. 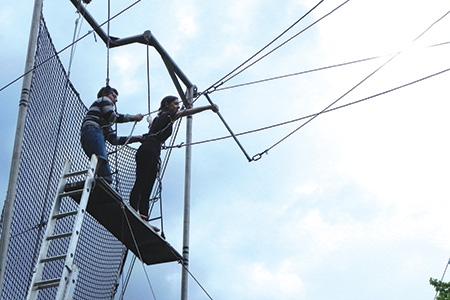 Gorilla Circus runs a summer school in flying trapeze in Regent’s Park, but before we start flinging ourselves through the air, our group starts the lesson on a static trapeze, which is, mercifully, very close to the floor.

Gorilla Circus’ Deborah (who has abs that make Gwyneth Paltrow look like a cheeseburger-stuffing slob) demonstrates how to loop your legs over so the bar is tucked under the knees. Then you tip back, let go, lean upside down and kinda just hang out there. We all give it a go – it’s a piece of cake.

But it’s a whole different ballgame doing that on a swing, 10m in the air. My heart thumps as I climb the rickety ladder up to the flying trapeze and when I arrive at the top I can only stop my hands shaking by gripping the trapeze bar tightly. Tutor Ezra shouts “HUP!” (circus speak for ‘go’) and I leap. 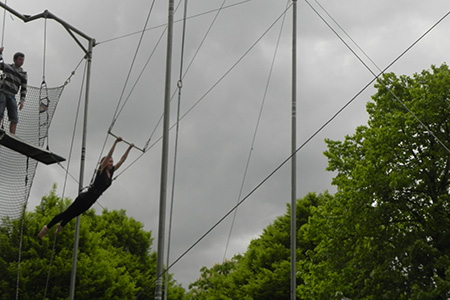 Next thing the wind is whistling past, I seem to have lost my feet somewhere around my ears, and the green blur of Regent’s Park is swinging crazily back and forth. I realise I’ve been ignoring Ezra’s shouted instructions – too busy thinking “weeeeeeeee!” ­

But following his commands, I manage to locate my feet, put them over the bar, swing upside down for a bit feeling like a total superhero and then land on the safety net. 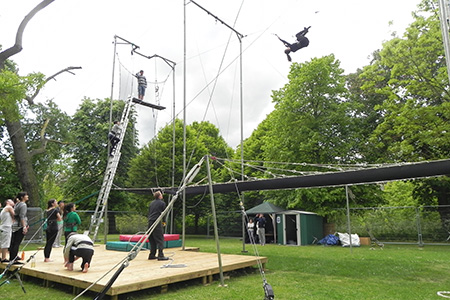 Ready to run away with the circus?

Absolutely, it’s a complete rush, and at the beginning stage at least, a lot easier than it looks.

How fit? Gorilla Circus’s Ezra Trigg says flying trapeze is considered one of the most adrenaline- infused versions of body conditioning. As well as being jolly good fun, she says it can “improve flexibility, strength and is a massive stress reliever”.

Do it: Gorilla Circus runs two-hour classes for beginners in Regent’s Park every week for £24 (gorillacircus.com). 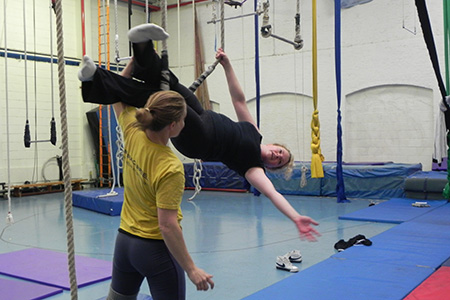 My dad built me a trapeze as a kid. I only ever dangled from my knees, but I was convinced I was a master, and put notices around my neighbourhood offering lessons. Fast forward 25 years, and I’m deflated as Moira, my instructor at Aircraft Circus in Woolwich, demonstrates the real way to dangle from your knees. She makes it look effortless, but I know before trying it’s going to be a challenge.

You must first do a plank, which entails grasping the trapeze, lifting your legs off the ground, throwing them over your head in a straight line and then hooking them over the bar.

I start to get it after three tries, though my arms are spent. Moira tsks. I’m flexible, she says, but my core is weak. She has me do some sit-ups while I dangle from my knees. By the end of the session, I’ve learned to sit and stand on the trapeze, plus some tricks.

The mermaid proves especially scary – that’s where I lie sideways on the bar, holding on with one hand, and do a showy backbend. I am defeated by the trickier birds’ nest, whereby I’m supposed to grip the ropes with my ankles and bend backwards. My arms decide they’ve had enough, and I come crashing down. Luckily, a massive crash pad makes it painless. 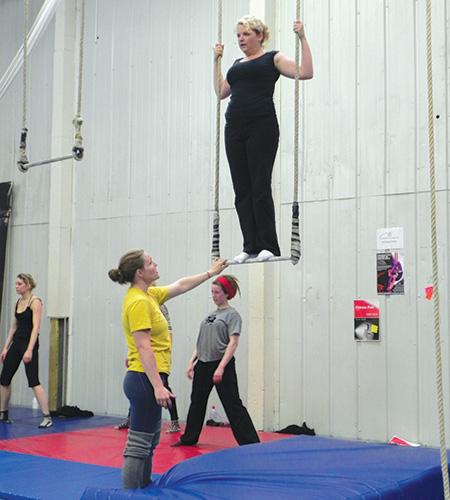 Ready to run away to the circus?

Yes. Despite my fumbling, the class was fun, and it’s a killer workout. I’ve never used so many muscles at once, and the next day, everything is throbbing. I’m tempted to take the six-week beginner course.

Moira Campbell, co-director and trainer at AirCraft, says trapeze uses muscle groups in a way the gym just can’t. “You get these big guys who work out all the time who come in and think because they’re strong, trapeze will be easy,” she says. “But they soon find they don’t know how to use those muscles.

The great thing about static trapeze is there’s no limit to your creativity. It’s interactive and sparks your imagination more than running for 45 minutes on a treadmill ever will.”

Do it: A taster course costs £30, or book a six-week beginner course for £130 (aircraftcircus.com). 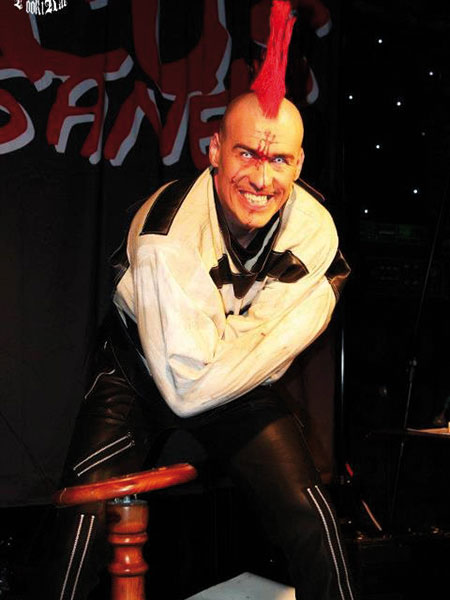 Still touring today after it was founded in the early Nineties, Seattle’s Jim Rose is responsible for a modern-day version of the freakish sideshow, with performers including The Amazing Master Lifto, who hangs weights from his genital piercings.

This schlocky rock ‘n’ roll touring circus could be best described as Rocky Horror meets a heavy metal video in a Big Top. The improbably named Hannibal Helmurto swings heavy objects on a meat hook through his nose, while one reviewer wrote of “an incident with a Henry vacuum cleaner and a dwarf that you won’t be reading about in a family newspaper”. Comes to London in October.

Doc reckons his show is so extreme, he’s been banned from countries, although they did let him appear on The Charlotte Church Show. One of his favourite routines is to put his face in a pile of smashed glass and ask an audience member to stand on the back of his head. See website for upcoming show dates.

4 Visitor Sites in the Galapagos Islands

Trial of Delhi rape five to be conducted behind closed doors

The three most iconic racehorses in UK racing history