“At first glance it appeared to be a harmless picture. It was a silly mistake on my part. I only became aware of the actual content of the photo when shown by a journalist today. This obviously highlights the pitfalls of social media. I apologise if I caused any offence,” Collier explained in a statement.

The Western Australia minister for education, who may or may not have been chuckling at the ‘sneaky nuts’ prank of devious testicle exposure, popularised by comedian Chris Lilley in the series Angry Boys, clicked ‘Like’ on the image posted on Facebook, which then broadcast the high school yearbook photo to his followers, reports The Guardian. 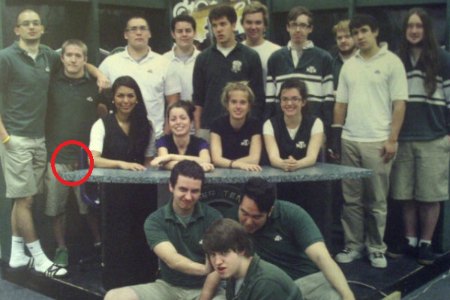 The yearbook photo, which showed up on Reddit several months ago

“The picture in the yearbook is a very small one and easily overlooked. But the school and the administration are very sorry that it happened,” said a spokesman for the Canadian Catholic school in London, Ontario, according to Ontario’s The Star.

“The school will be looking at taking appropriate action for anybody involved in the incident.”