This week Sydney played host to the world’s first Roller Derby Xtreme tour, showcasing two US teams – the LA Derby Dolls and the New York Gotham Girls. It was also the first time in almost thirty years that a banked track has been used in Australia.

As a girl whose only prior knowledge of the sport comes from the film Whip It, I discover the rules are much more complex than Drew Barrymore led me to believe. Roller Derby (debate over the pronunciation of ‘derby’ continues) sees two teams of five roller skate-clad players battling it out on the track in a series of one-minute ‘jams’. The aim is for each team’s ‘jammer’ to break through the pack and start scoring points by lapping as many opposing players as possible.

Throw in some complicated offside and penalty rules, rotating players and face-obscuring helmets and it very quickly becomes a very difficult game to follow. With competitors named Fleetwood Smack, Gori Spelling and Laguna Beyatch, and one girl who has ‘EAT SHIT’ tattooed across her fingers, it turned out to be one of the most brutal events I’ve ever seen. 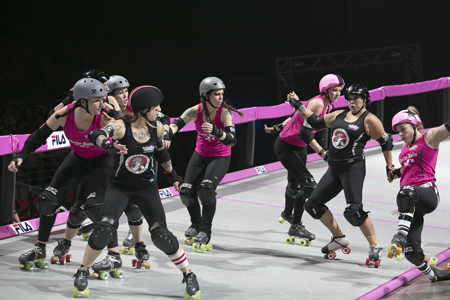 Pumping out of the speakers is Alica Keys’ Empire State of Mind followed by Katy Perry’s California Gurls, cajoling us to pick an east or west coast team. Being more of an Alicia Keys fan, I back the New York Gotham Girls – the banked track underdogs.

To my surprise it takes only a few jams for the Gotham Girls to take the lead, thanks mostly to their captain and jammer extraordinaire, Bonnie Thunders, who muscles her way through to the front of the pack time and time again. Also jamming for the Gotham Girls and inciting the crowd to a boisterous cheer is Canberra’s own Short Stop, who walks away with the coveted ‘Most Valuable Player’ award.

The real appeal of the game is in seeing the strategy and teamwork that goes into each jam. Watching the jammers traverse the track, slingshotting from player to player as their blockers aid them and impede the other team, is both astounding and agonising. There are tense moments when nimble jammers from both teams try to leap past the pack on the lower side of the track – a risky move – which sees them being knocked to the ground by the ruthless blockers. I’m impressed by how quickly these girls get up and jump back onto the track, unfazed by impending bruises.

I heart you – smiley face: virtual affection is taking over real life