Romantic Milford Sounds: A traveller’s tale of love and beauty in New Zealand

Don’t get me wrong, the twin wonders of Doubtful and Milford Sound were a sight to behold, the shining diamonds in New Zealand’s crown. The people were nice, the transport was on time, the weather fantastic. The trip couldn’t have been any better.

But, I’d visited one of the most beautiful places I could ever have imagined, on my own. As I was cruising 10 thousand-year-old fiords, my girlfriend was working back in Sydney.

So I made myself a promise: I was going to return to this wonderful corner of the world with the lady in tow, so she could see what all the fuss was about. At the very least, it could be a relationship make-or-break trip, to see if we were really meant to be.

Both Doubtful Sound and Milford Sound are situated in Fiordland National Park, a beautiful World Heritage area in the south-west of New Zealand’s South Island.

Maori legend has it that the godly figure of Tu-te-raki-whanoa was given the task of creating the Fiordland coast with his mighty axe, Te Hamo. At first, Tu (that’s what we’ll call him as I can’t be arsed to type his name over and over) was learning his skills so the fiords to the south, including Doubtful Sound, had wide waterways and large rounded peaks.

As Tu worked his way up the coast, his craftsmanship improved until he created his masterpiece, Piopiotahi (Milford Sound), with jagged sharp mountain tops as far as the eye can see. 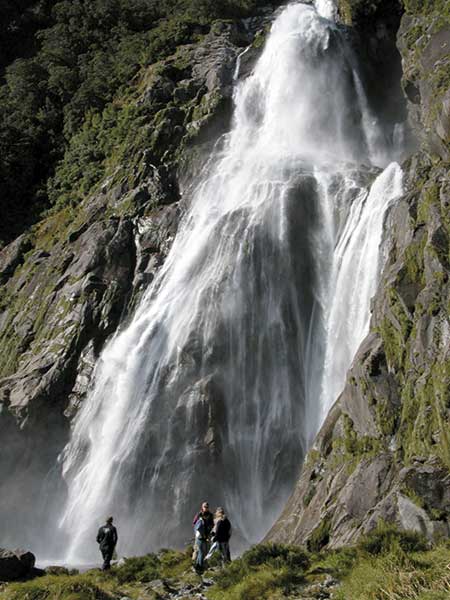 The Sounds are incredibly different but equally impressive. Doubtful Sound is the bigger, less famous sibling – call it the Randy Jackson to Milford’s Michael. It’s three times longer and has 10 times the surface area of Milford but with half the amount of visitors.

One of the reasons might be that it requires quite a bit of effort to get to. First a boat takes you over Lake Manapouri to West Arm, then there’s a bus trip over the most expensive road in New Zealand – Wilmot Pass – to Deep Basin Harbour.

Doubtful Sound was given its name by Captain Cook, who when out discovering refused to sail into the sound as it was doubtful he would be able to sail back out again. Suppose it sounds a bit better than I’m The Boss And I’m Not F*cking Sailing In There Sound.

Doubtful is more of a slow burner in the ‘wow’ stakes in that as you pull away from Deep Basin, its beauty is still to be revealed. Its delights unveil themselves to the observer piece by piece as the boat turns another corner to showcase another imposing rock formation poking out of the water.

The green ranges are pock-marked with grey scars, evidence of tree-valanches caused either by heavy rain or all too frequent earthquakes.

The burner picks up its heat until all of a sudden you say to yourself, “My God, this is a stunningly beautiful place” without even realising how you got to that conclusion. But then I knew all that already – it was the reaction of the girlfriend I was looking for but I all was getting out of her was a stony silence. Each to their own. 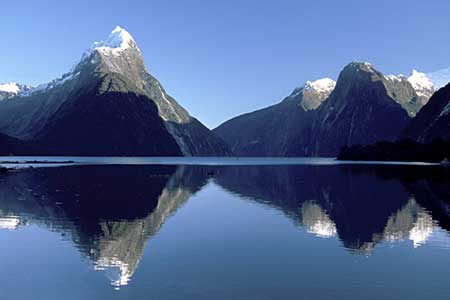 Maybe I’d get something more from Milford Sound, a more obviously stunning area. It’s the flashy, popular destination that is the busiest tourist destination in the country, despite the fact the area ‘enjoys’ 300 days of rain a year.

Now I was all ready to blow your mind with stunning facts about the area’s flora and fauna, the geological and seismic conditions that bought the region into its current state and all that malarkey. However, we ‘enjoyed’ one of those days where the heavens opened and all I can read of my notes is the following: “Pissing down with [unreadable]… can’t write a [unreadable] thing… [unsayable] this for a game of soldiers, I’m off for a hot chocolate”.

What I didn’t need notes for is the memory of the most stunning collection of mountains and waterfalls I’ve ever seen.
I had clear blue skies on my last trip to Milford, which I didn’t think could be topped, but the rain made it even more memorable.

Everywhere you looked, rain was running off the sides of the rocks, some landing in a powdery white mist on the surface while others crashed down with the power of a 747 jet engine.

It was mother nature at its best and something I felt blessed to witness.

Surely that would get a reaction from my girlfriend. How could it not?

There was nothing left to do but have ‘the chat’. You know the one that most couples travelling have where they talk about their relationship in hushed tones over a pot noodle with “Don’t f*cking disturb us” looks on their face.

Me: “Didn’t you like the places we went? I was hoping that you were going to like them as much as I did but you obviously didn’t. I’m not sure we should see each oth…

Her: “God, I loved them. I just couldn’t find the words to express how amazing they were.”

It was the reaction I was looking for after all and to prove it, I married her this year.

And she loved the dictionary I got her as a wedding present.

Working with criminals in a Seattle fun park