The royal wedding weather forecast is not looking good with rain and even thunder storms and lightning possible. Kate Middleton and Prince William may well be needing their umbrellas.

Most dramatic of the royal wedding day weather predictions suggest that thunder storms may mar the day. “We wouldn’t rule out the odd lightning strike as well,” says Aisling Creevey, a forecaster at MeteoGroup.

Even if the storms hold off, William and Kate should be prepared for rain on their royal wedding day.

MeteoGroup’s Paul Mott said that at least some showers are expected.

“It will be a fairly mixed day. There could well be some rain first thing, but it looks like it may well clear up,” he said.

“It will probably turn dry for a time but certainly through the afternoon, there is a growing risk of further showers coming in, perhaps even a thunder storm.”

After an unseasonal heat-wave, it will come as a disappointment to those getting psyched up for the royal wedding that the weather is refusing to honour Prince William and Kate Middleton.

However, according to Mott, the rain may hold off for crucial moments on the royal wedding day, such as when Kate steps from her limousine at 11am to enter Westminster Abbey on her father’s arm.

“It is probably more likely to be dry than not at that particular time although fairly cloudy at times. Temperatures could climb up to 18 or 19C,” the weather forecaster said. 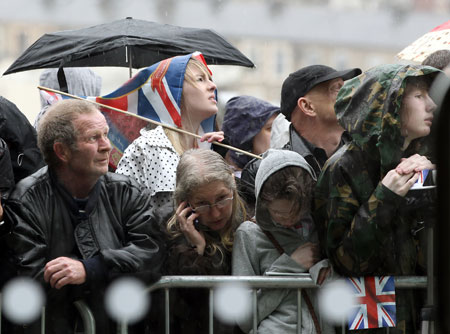 Royal fans stand in the rain for Prince William and Kate Middleton during their visit to Darwen Aldridge Community Academy in Darwen, north-west England, on April 11, 2011. Will there be similar scenes on the royal wedding day?

If it does rain on the royal wedding day, Kate Middleton will be covered with over-sized umbrellas as she enters Westminster Abbey – a massive blow to those who’ve camped outside for days, hoping for a glimpse of her wedding dress.

Poor weather will also mean that Prince William and Kate will no longer be able to travel from Westminster Abbey to Buckingham Palace in the open-top 1902 State Landau carriage. Instead, the couple will cruise in the Glass Coach—the same one Diana, Princess of Wales, took to her wedding at St Paul’s Cathedral in 1981.

Royal wedding fans are being urged to bring umbrellas but the rain is not expected to put anyone off.

Officials at St. James’s Palace said: “The rain will only add to the Britishness of the occasion. I’m sure it won’t put people off coming to line the route.”