That’s now eight losses for the season, and the worst possible start to their five-Test autumn series in Europe.

There were moments worthy of encouragement, mostly in the latter stages of the first half in which the Wallabies scored their solitary try through Matt Toomua.

England, despite a few newbies – Billy Vunipola making his first start and Joel Tomkins his debut – were the more unified side with the stronger pack.

Both of their tries came with an element of luck, but Ewen McKenzie has no major cause to be begrudged. 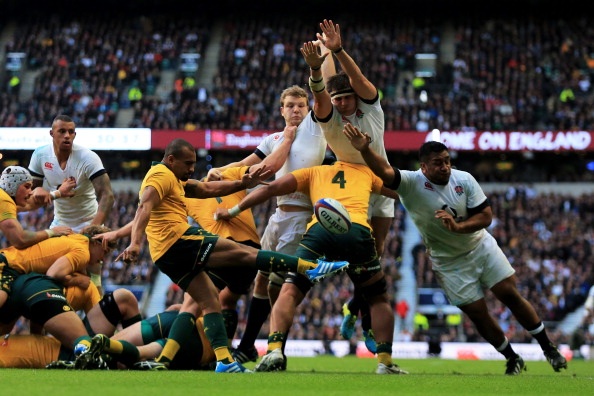 Australia couldn’t muster a point in the second half, and the coach’s bold call to make Ben Mowen captain and Quade Cooper his vice certainly didn’t have an immediate impact.

While the Wallabies scored 10 tries in their previous two Tests against Argentina and New Zealand – a win and a loss – McKenzie has a 20 per cent winning record since taking over from Robbie Deans.

And the Grand Slam dream, a lofty and probably unrealistic one, is gonski.

McKenzie did his best be gracious in defeat, but couldn’t not make mention of the gross oversight of Mike Brown’s foot landing on the line and giving England an attacking opportunity rather than putting them under the pump.

Australia coach Ewen McKenzie (On Brown’s missed line call): “That was a 90-metre turnaround and there’s seven points at the end of it. Theoretically, we should have been having a line-out five metres out. You can’t say those things don’t have an impact on the game, but I guess that’s the vagaries of rugby.

“You rely on these things but in the end we’ll just look at the opportunities we had and the mistakes we made. We didn’t handle the second half as well as we would have liked. England squeezed us a bit at crucial moments and were able to manage the game.”

Australia captain Ben Mowen: “Just after half-time was a real opportunity for us to skip ahead and put pressure on England but we missed a few of those opportunities and they were extremely urgent, [they] beat us on a couple of retreats. When you have that urgency, married up with a few things going your way, they created that momentum and took those two tries, so you’ve got to give them that respect.”