England arrived in New Zealand with patchy form under their belts, having split their warm-up Tests against Wales before overpowering a listless Ireland side in the final hit-out. Of course, once the World Cup kicks off, all lead-up form goes out the window. In a pool containing Argentina, Scotland, Georgia and Romania, England should qualify top and then the tournament really begins. According to Andy Gomarsall, the former England scrumhalf who took part in three World Cup campaigns, including the 2007 tournament in France, the six-week campaign exacts peculiar pressures on a side but England have, over the journey, shown they relish the format.

“I’m quite bullish because we’re got a good history – we’re good at this kind of knock-out competition,” Gomarsall says. “We’ll win the group, I don’t think there’s any doubt about that. And then there’s a quarter-final against France. I’d fancy our chances there, having beaten them in the past two World Cups. And then maybe a semi-final against Australia – that’s where it gets interesting. That’s too close to call.

“It’s a different competition – it was my dream to play in a World Cup final and I loved everything about it. At the last World Cup, the story was all about the minnows who over-performed, most memorably with Argentina beating France. It’s the best atmosphere of anything I’ve experienced and I’m so privileged to have taken part in three of them.”

Unsurprisingly, not everyone shares Gomarsall’s optimism. In recent times, England’s performances have been characterised by a lack of invention, a shortcoming heightened by the squad selected by manager Martin Johnson. It is a squad heavy on bullocking forwards and short on dynamism.

“I agree to a certain extent,” Gomarsall concedes. “By not picking Riki Flutey, Johnson’s squad lacks a midfield with real creativity and he’s got a few players in there who have the same skills. But it’s also a consistent squad – I don’t think there will be any shocks.

“But I think part of why this comes up is that Shontayne Hape is on and off – he hasn’t quite made his mark. We’ll back him – he’s a professional and he’s an extremely good player. Johnson sees something and you have to trust that it will come out.”

England imposing forward pack may yet stand them in good stead – it is hard to see them being bullied and if the World Cup descends into trench warfare they will be well-equipped.

“The way the rugby will be played in New Zealand, the teams with the biggest forwards will make it through to the final stages,” Gomarsall says, explaining his confidence. “It probably won’t be dry and England will be looking to play a power game, which they’re good at when on song. Johnson will be trying to pick a big, positive forward pack who can dominate – New Zealand and South Africa are the only teams who can match England in the forwards and we beat Australia at the last World Cup playing that kind of rugby. In the old days, we wouldn’t have given the ball to the backs at all.”

Johnson, of course, remains a revered figure in English rugby, having captained them to glory in 2003. Since taking over as manager in April 2008, though, Johnson has been unable to leverage his rarefied success into real managerial standing. And, on the eve of the World Cup, the RFU, the sport’s governing body in England, is in disorder. Clive Woodward, England’s manager during the successful campaign of 2003, has suggested Johnson will be judged on England’s performance at the forthcoming tournament. Although Gomarsall acknowledges that the buck will undoubtedly stop with Johnson, he remains adamant his former captain is the best man for the job, a conviction unlikely to be reversed by whatever unfolds in New Zealand.

“Johnson gets stuck taking the brunt for the organisation as a whole,” Gomarsall says. “He’s there for his inspiration and his decision-making and he knows the game inside-out and also the players. There’s no one better to do that – Johnson’s got it. But when other influences within the management team don’t pull their weight, he cops it. And some of the game planning at crucial times has been poor.

“It takes time for a management team to gel and they’ve not quite done that. They’ve done it in patches but not consistently. In terms of nailing it down, hopefully it happens at the World Cup.

“There’s an argument that he’ll be judged on the result of this World Cup and I think a final is the minimum requirement for Johnson, and then it’s anyone’s game. But even if they don’t make it, I still think he’ll stay in charge. It’s about how England play – the pressure comes on when England perform poorly.”

For all his England drum-beating, Gomarsall owns up to a dash of sentimental support for the hosts, who, he admits, are deserved favourites on paper.

“I think it could be their year. I think there’s a romantic side to it,” he says. “New Zealand, on their home patch, having had those natural disasters – they’ve had a tough old time of it. But they’ll be massively under pressure and I still think that South Africa could be their nemesis – that could be the stumbling block in the semis.

“But you look at the players who haven’t made their side. If there was a draft, you’d have most of them. The depth of talent is phenomenal – they’re so technically gifted but also athletically. To be able to leave out Hosea Gear and Sitiveni Sivivatu – any team in the world would have them.” 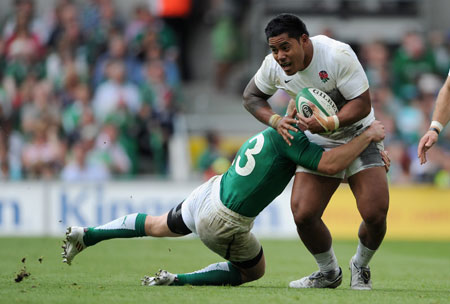 Overview It’s hard to disagree with Andy Gomarsall’s optimism. This England side have plenty of flaws but they have some serious World Cup bonafides and their bruish forwards will usher them through the group stage without two many problems. The projected semi-final against Australia looms as an absolute blockbuster but the Wallabies, in the southern hemisphere and coming off their Tri-Nations win, should have the edge.
Key players Playmakers Jonny Wilkinson and Toby Flood will be expected to ignite England’s attack but it may be newcomer Manu Tuilagi who most shapes England’s campaign. In a stodgy side, Tuilagi not only adds an explosive try-scoring threat but is also capable of delivering a monster hit when the other side has the ball. At 20, Tuilagi is still developing but England appear to have found a star of the future.
Prediction Losing semi-finalists.