With just four overs left, the umpires took the teams off for bad light, with England needing just 21 runs.

And people wonder why Test cricket is dying. This sort of stuff is why.

The cricketing public owed Michael Clarke a massive thank you, after the Aussie captain’s decision making gave the crowd on the final day something to cheer.

Today could have been a dead rubber but thanks to the integrity of the Australian captain England were give a chance to win the final Test.

However he compromised that by nagging the umpires into getting the match abandoned.

Michael Clarke’s men were desperate to make something of the final session, and it look, momentarily, like England were going to go for the victory as well.

Unlike the Aussie captain there were no batting order changes for Alastair Cook though, as Alastair Cook and Joe Root made their way out to the square. 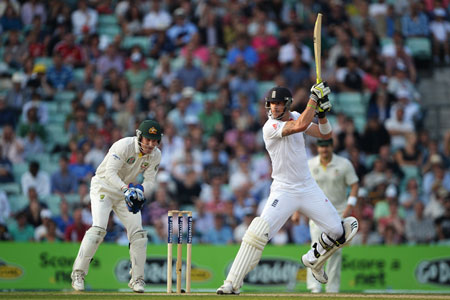 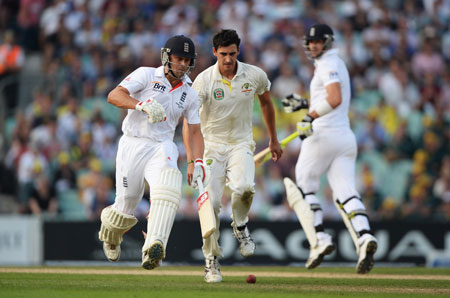 The England captain, showing rare touch for this series, dispatched a couple of early boundaries, giving the crowd the hope that maybe England were going for the win.

Root was first to go, wafting at one from Ryan Harris, and sending an edge through to Brad Haddin who took the catch and the record for the highest number of catches in an Ashes Test series.

The crowd were desperate for England to seize the impetus, with a required run-rate of just 5.12 per over.

England looked like they were biding their time easing to a decent score before having a crack at the score over the last 20 overs.

Michael Clarke brought himself into the attack as Trott and Cook looked to build a partnership.

Trott, showing him ability for one-day style cricket, up his scoring rate to something approaching his maximum.

He duly notched the fastest ever Ashes half century by an Englishman, flaying the ball with almost metronomic regularity to the boundary to reach his half ton off just 36 balls.

England’s required rate hung around the six per over mark for much of the session, dipping to 5.50 whenever Pietersen was on-strike.

He eventually fell to Ryan Harris.

A great record was then broken, with more runs scored on this final day than on any other final day in history.

Bell and Woakes edged closer, before Bell fell, and with four overs to go the umpires whipped out their light metres and called off the match in disgraceful circumstances.