While still a teenager, Kurtley Beale was marked as one to watch, his electric pace and ball-handling earning comparisons with legendary Wallabies flyhalf Mark Ella. Now, the former schoolboy star, who attended his first Wallabies camp at the age of 17, will head to New Zealand as his country’s first-choice fullback and one of the main beneficiaries of coach Robbie Deans’s investment in youth.

Alongside Quade Cooper and James O’Connor, and with Will Genia in the halves, Beale is a cornerstone in an Australian backline that has been remodelled since the last World Cup in 2007, one that, despite its relative inexperience, is one of the most dangerous in the world when on song.

“When we train, we’re really trying to get those combinations and get everything running smoothly,” Beale says of the backline synergy that seems likely to determine how far Australia go at this year’s tournament. When Australia’s playmakers click, the result is spectacular, but when they misfire, their flamboyance becomes self-defeating.

“You go into matches and sometimes find that you need a plan B, but we’re concentrating on putting our training into action on the field. We need to stick together for the full 80 minutes and really believe in each other.”

Certainly, it has not all been plain sailing for the Wallabies since Deans took over – there have been some predictable complications accompanying the transfusion of new blood into the ageing side that the incoming coach inherited. During the 2009 Tri-Nations, for example, Australia won just one match, outsmarted and outmuscled by more advanced New Zealand and South Africa sides. Then, in 2010, improved to win twice, leapfrogging a flagging South Africa but still miles behind the mighty All Blacks.

There have been bad games and damaging lapses, periods of inspiration interspersed with periods of frustration. Supporters have had to keep the faith, weathering the occasional abject performance, gleaning satisfaction from the gradual improvement, celebrating when everything falls into place and Australia produce the kind of rugby that underlines their potential and fires the imagination. For example, last year, the Wallabies were belted by England at Twickenham but then, a fortnight later, inflicted a similar hiding on France.

“I think we still throw the ball around a fair bit and then hopefully leave it to the halves to control the game. A big part of our improvement has been learning when to kick and when not to,” Beale says.

“A lot of it is attitude – we’re starting to back ourselves more as a team and not letting our opponents in with silly mistakes and forced passes.

“Losing the ball really hurt us – there’d be stages when we just weren’t in the game mentally. As we’ve played more together, we’re now ready from the get-go.”

Perhaps the World Cup has come along 12 months too early for Australia to truly challenge but, all things considered, Robbie Deans’s overhaul has been successful. He has replaced George Gregan with Genia, while Cooper has edged out other candidates to lock down the flyhalf role – Matt Giteau has been pensioned off and Berrick Barnes has been shifted to the centres. Adam Ashley-Cooper remains from the class of 2007, while O’Connor and Digby Ioane have been introduced, along with sevens alumni Pat McCabe.

Australia’s wealth of backline riches has apparently allowed it to cover the loss of Barnes and Drew Mitchell, both of whom have been named in the World Cup squad despite being sidelined with injuries. 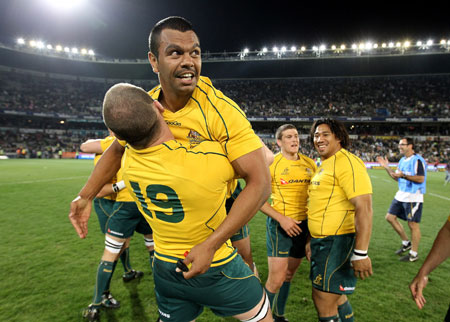 But the Wallabies are, as has been the case for more than a generation, less blessed when it comes to the forwards – their pack has endured perpetual chopping-and-changing as Deans experimented with different combinations. The results, at times, have been underwhelming, the Wallabies forwards cruelly exposed by the likes of South Africa and even coming up short against the Italians on one occasion. It remains the side’s achilles heel but Beale is confident the side now has the grunt up front to go toe-to-toe with the toughest packs.

“Some of the scrummaging during the Tri-Nations has been outstanding and time will only help us improve that. The more those guys play together, the better,” Beale says.

“There are some very competitive packs in world rugby but I don’t think we need to focus on them at the moment. We’re just concentrating on our and when we come face-to-face with those other sides, we’re very confident we’ll be able to hold our own.”

If Deans’s youth project has endured its share of setbacks, it has also forced the young players in the squad to take responsibility. They have not had the luxury of hiding behind senior players.

“There are a few young guys but most of us have got quite a lot of caps already so there’s a fair bit of experience there,” Beale says. “And then those older guys give the squad that balance. Guys like Rocky Elsom, Stephen Moore and Nathan Sharpe are leaders around the park and the younger boys really follow them but those guys are also stepping up and starting to communicate.”

Whether those young Wallabies back can make the ball talk, though, will determine how they fare over the next month.

Peaking when it counts

Wallabies can win it

Overview Assuming Australia overcome Ireland to finish top of their pool, a likely quarter-final showdown with Wales looms, ahead of a semi-final clash with England or France. It should, in theory, mean Australia avoid New Zealand and South Africa before the final. Of course, the northern hemisphere challengers are no pushovers, but Australia should have too much dash in the back half and be sufficiently well-organised elsewhere to avoid being bullied by bigger packs.
Key player Beale, Cooper and O’Connor may be the glamour players, but Will Genia, along with Dave Pocock, would be the hardest player for Australia to replace. His quick hands, vision and work-rate have drawn comparisons with George Gregan – now, all Genia needs is to steer the Wallabies to World Cup glory, as Gregan did in 1999.
Prediction Runners-up.

It’s a Family Affair at the Melbourne Cup