When the All Blacks bowed out at the quarter-final stage of the 2007 Rugby Word Cup, a strange moaning was heard around the globe. The three major islands of their home country, New Zealand, initially howled in surprised anguish – like a bull stung by a bumblebee – and then entered a prolonged bout of wounded sobbing. Children were sent outside as fathers turned the air blue with curses to the heavens and to their fallen demi-gods – a squad of 30 young men burdened with winning a series of seven games in order to hoist aloft a gold trophy to provide reassurance that New Zealanders, isolated as they may be at the bottom of the world map, can still pack a punch; that Kiwis can fly.

Talkback radio lines rang non-stop as every critic in the country phoned in from their armchairs, where they sat glued to TVs beaming scenes of the All Blacks 18-20 loss to France with a repetition-rate rivalling the coverage of September 11, 2001.

If those fans had been able to muster the energy to stop blaming everyone, from the referee – several published explicit internet death threats against Englishman Wayne Barnes – to the players, to the victorious French, they would have burnt effigies of the All Blacks coach Graeme Henry. Henry had developed a well-publicised, much-maligned rest-and-rotation policy which had left his top players seriously underdone and without a plan B. In short, he failed. Miserably.

In a country where the one previous World Cup-winning coach, 1987’s Brian Lochore, was knighted and the subsequent losing ones spat at in public (1999’s John Hart), abused from all quarters (1995’s Laurie Mains) and pretty much driven out of the country (2003’s John Mitchell), to reappoint Henry after New Zealand’s worst World Cup performance was tantamount to heresy. But reappointed he was.

Now the game’s showpiece arrives in his home country. For Kiwis, it’s the culmination of four years of creating a squad of battle-hardened warriors who have bashed themselves up for a chance to chase a gold pot at the end of the rainbow. Those players will do so in front of a fanatical supporter base including children, mothers, grandmothers and even the odd farm animal.

Winning will create delirium in the land of the Kiwi; it will bring a chest-beating that will reverberate around Earth, like an African drum rhythm informing the other tribes in the global village that they are the champions – don’t forget them, they can stand tall. But a loss will bring an encore of the moaning – that strange sound of a wounded animal, hurt, confused, ready to lash out on its way to a secluded area to lay and wonder whether if this is it, is this the end?

The smart money’s on NZ, but the chance of Kiwis taking either result with silence and humility – well, there’s not a bookie in town who’ll give you those odds. 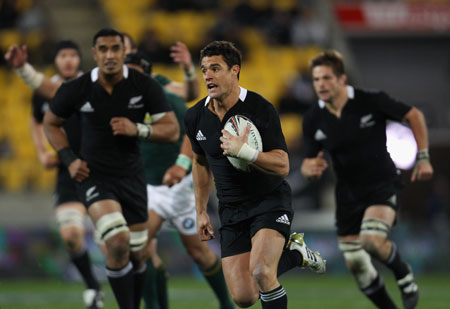 Overview: In Pool A, the All Blacks will easily dispose of Japan, Tonga and Canada and their first big test comes in the form of their World Cup bogey team, France. Should they win, they’ll face either Argentina or England in the quarters, South Africa in the semis and the Wallabies in the final. To win all those games in a month, NZ will rightly be crowned world champions.
Players: Richie McCaw (main picture) and Dan Carter. McCaw’s experience, leadership, manipulation of officials and reckless regard for his own body spurs his troops on in every game. Carter’s ability to read the game is second to none. He knows exactly how best to unleash his talented troupe of outside backs and his precise kicking game is the best in the world.
Prediction: First.