Bleary eyed, I fumble out of my cabin, on to the deck, where the sound of laughter and dive bombs have replaced the soothing whir of the boat’s motor. Reaching for my sunglasses, I gawp, mouth half open, at the clichéd image of paradise in front of me. 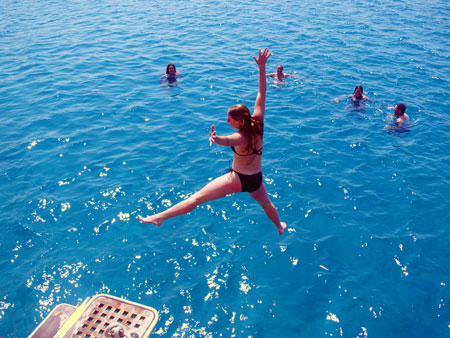 Just 24 hours ago, our boat, Richmond VI, was racing the super yachts out of Bodrum’s swish harbour, sailing away from the storm clouds hanging ominously above the town’s Crusader castle, towards the sun-soaked horizon and the Greek waters beyond.

Since leaving the bustling Turkish port, we’ve been to Kos for a history lesson and nearby Leros for a sundowner, and we are now anchored off the coast of Amorgos, surrounded by olive-grey islands and greeny-blue waters.

“Jump, jump,” yell my fellow shipmates, treading water below me – my friend Dee and I are sailing to Mykonos with 10 Aussies, a Kiwi and an American girl, on board a 90ft Turkish Gulet. 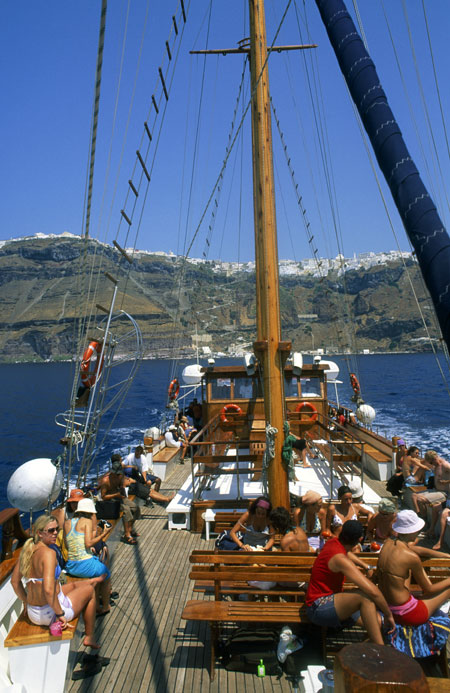 I edge on to the top rung of the ladder and, after some umming and ahhing, launch off the side of the boat, swallowing a mouthful of seawater as I hit the water.

After a brief swim stop, the engine starts up again and we all dry off on deck while the boat snakes its way to the sleepy fishing harbour of Katapola.

The port is conspicuously quiet, so we hire three cars between us and explore the island, heading straight for the sherbet sands at Aegiali. A picture opportunity beckons on every turn – dramatic mountain passes, a herd of goats crossing the road, an old man riding a donkey. And by the time we arrive at the beach, after stopping at every bend to take pictures, I’m absolutely famished.

I gorge on a pizza while the others dip their toes in the surf, and after an hour or so relaxing, we pile back into the cars and head above the clouds to the island’s capital.

The village looks unimpressive from the outskirts, but a few twists and turns transport us into a maze of quirky cafes, shops and tavernas, with just a hint of Gaudi’s Barcelona to the place.

As the light starts to fade, we saunter to the windmills crowning the village and watch as the sun disappears behind the rooftops, before heading back down to the boat for an evening of belly-laughs, fine dining and drinking on deck.

After a few hours’ sleep, I’m shocked to see a new island, Santorini, rising above the masts. Sky-scrapper-high cliffs erupt from the sea, dwarfing the huge cruise liners docked beneath the capital, Fira.

“You’ve got three options,” says Alex, our tour guide. “You can either queue for a cable car, walk up, or take a donkey.” 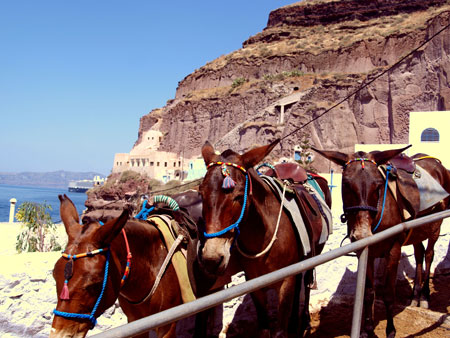 Dee and I choose option number two. The queues are ridiculous and we feel sorry for the “beasts of burden” ferrying tourists up such a mammoth climb – Fira is 1200ft above us.

Fortunately, the walk isn’t as bad as feared and I barely break a sweat.

The view from the top is stunning. Dee and I join the rest of the group for a drink at one of the packed cafes overlooking the cobalt-blue lagoon.

We decide to split into smaller groups, although invariably end up going to the exact same places – every tourist seems to wander around the narrow streets of Fira, before heading to one of the famous coloured beaches, and catching the bus to the mountaintop village of Oia, whose blue-domed churches adorn just about every guidebook cover – before reuniting for cocktails and a boogie.

The following day on Ios, we decide to stick together and head to Mylopotas Beach.

Some of the group goes wakeboarding, while others top up their tans. I persuade Dee to come paddle boarding with me, and we spend the afternoon splashing about and falling in.

Ios is a legendary party island, but after our late night in Santorini, no one is feeling it, so we slope off early back to the boat.

Following this “sensible” night, my shipmates and I are in the mood for a bit of fun and, after a quick detour to Naxos for an ice-cream, we set sail for Paros where the majority of us hire quad bikes.

It’s my first time on a quad and my legs shakes uncontrollably as we drive out of the capital. It’s not long, though, before I discover my inner Jeremy Clarkson and am speeding along at 50km, overtaking the rest of the group, hooting my horn like a local. Our race takes us to Kolymbithres in the north of the island, where we discover our own private beach nestled among giant boulders, with vodka-clear water.

In my haste to cool off, I forget to take my phone and wallet out of my swimming shorts, much to everyone else’s amusement.

Once the laughter dies down, we start our engine and speed through the hilly interior to rejoin the rest of the group for a traditional tapas-style meal on the promenade.

Arriving at our final port of call, Mykonos, I’m full of conflicting emotions: I’m acutely aware that I’ll have to bid my new friends farewell tomorrow.

Dee and I amble through the crowded streets of Mykonos Town enjoying a spot of window-shopping, before rejoining the rest of the group for dinner in Little Venice, the seafront district opposite the town’s famous windmills.

After demolishing a moussaka, I’m led to a raucous, standing-room-only hangout where revellers are “forced” to dance on the tables and windowsills, and exit the crowded club via the windows. It’s a complete change of tempo, but I love it.

Find an island or two to suit you. 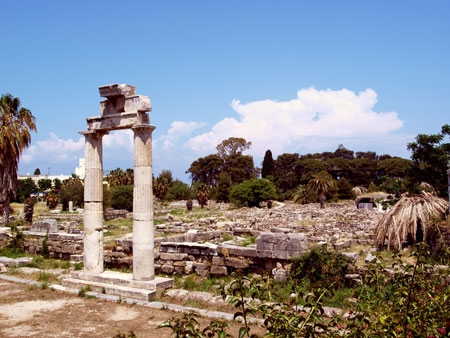 The ancient agrora in Kos.

Best for a spot of culture
Where: Kos
Why: There’s a smorgasbord of cultural attractions on Kos, with Venetian, ancient Greek, Roman and Byzantium ruins galore. Much of Kos Town was destroyed in an earthquake in 1933, giving archaeologists the perfect excuse to excavate the ancient city buried beneath. A short stroll from the town centre, past the 14th century Castle of the Knights and the Hippocrates Plane Tree, are the remains of the Shrine of Aphrodite, the Temple of Hercules and the Christian Basilica, and the painstakingly restored Roman amphitheatre.

Best for exploring
Where: Amorgos
Why: Rocky escarpments, dramatic coastal vistas and a tourist-free capital are just a few of the island’s unexpected draws. Amorgos is dotted with hilltop forts, ancient churches and custard-yellow beaches, although you need to hire a car or a quad bike to experience them. The hora (capital) is a curious labyrinth of whitewashed alleyways, while the 11th century Panagia Hozoviotissa Monastery, clinging precariously to the cliffs, is another unexpected treat. 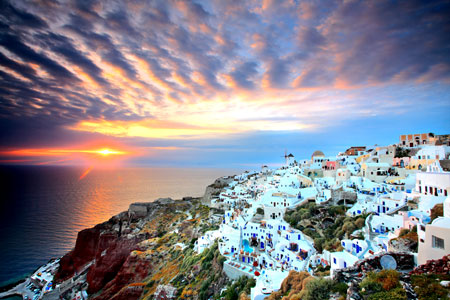 Best for dramatic scenery
Where: Santorini
Why: Rising volcanic peaks, rugged coastline, red-, black- and yellow-hued beaches, hotpotch towns perched high above the hillside – the island is a photographer’s dream. Most visitors stick to main island, Thira, with its donkeys, blue-domed churches and Neapolitan-coloured coastline. If you have time, squeeze in a half-day visit to the volcano on Nea Kameni and the hot springs on nearby Palea Kameni.

Best for partying
Where: Ios
Why: Numerous islands lay claim to the “party isle” crown but if you’re looking for a boozy all-nighter, Ios is the place to be. During the day the beaches and the picturesque capital are curiously void of tourists, but come 3am the bars open and the revellers surface. The hedonistic pool parties at the FarOut Beach Club are legendary among Ios’ ravers.

Best for going au naturale
Where: Naxos
Why: The beaches close to Naxos Town are reserved solely for “textile wearers,” but if you have the time to travel to Plaka (six miles south) you’re more than welcome to slip out of your cozzie. The resort is surrounded by rocky outcrops and secluded coves that are almost exclusively nudist, while the wide sands of the main resort are split equally between the naturist north and the costume-wearing south beach.

Best for water sports
Where: Paros
Why: Windy Paros has the perfect conditions for everything from kite surfing to catamaran sailing. There are a number of beaches close to the capital, Parikia. But if you hire a quad bike, scooter or car, you can find less crowded beaches with more activities on offer along the east and south coasts.

Best for splurging
Where: Mykonos
Why: Greece’s answer to St Tropez is the place for boutique shopping, upmarket restaurants and swanky cocktail bars. The narrow alleyways of Mykonos Town are stuffed with eye-wateringly-expensive jewellery shops, high-end artist studios, and chic stores selling the latest Hermes and Dolce & Gabbana.

Getting there: EasyJet flies to Bodrum from both Gatwick and Stansted, starting from £70 (one-way). Flights back to Gatwick from either Mykonos or Athens start from £75. See easyjet.com, Regular ferries sail to Athens’ Piraeus port from Mykonos, from £35.
Get more info: visitgreece.gr