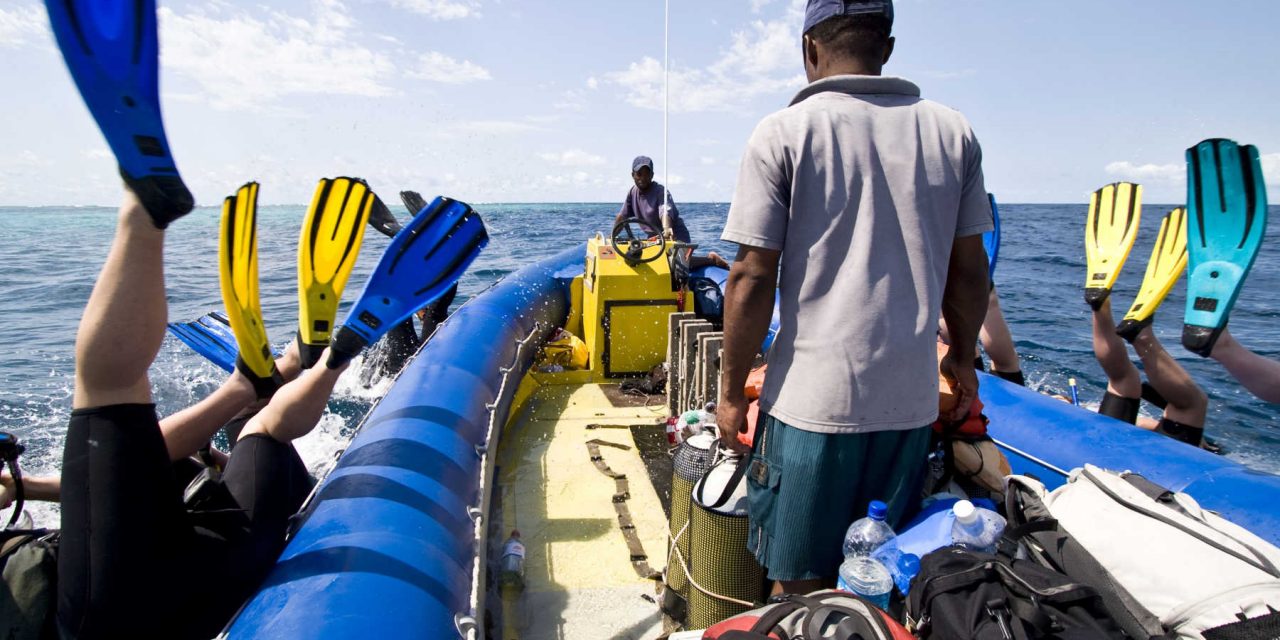 There are many shades and tones of blue – royal blue, navy blue, powder blue, sky blue. When it comes to describing the colour of the sparkling waters around Zanzibar, however, these descriptions present themselves as somewhat inadequate. It certainly seems that way for Daniel, a young South African clearly intoxicated by the ocean around us as we travel in a wooden boat to our dive site 90 minutes offshore from the main island of Zanzibar.

“Many South Africans have swimming pools and they pump loads of chemicals in them to get the water this blue,” he says reflectively as we pass over deeper water, changing the shade again. “It’s amazing.””

It’s hard not to agree, but the amazing water doesn’t stop with its colour. With visibility up to 60m and water temperatures that warm the thermometer up to an enticing 29°C, it’s little wonder that thousands of divers converge on the archipelago of Zanzibar.

A gaggle of boats greet our arrival as we find our dive spot adjacent to an atoll about 90 minutes from our base of Nungwi, on the northern reaches of Zanzibar. As soon as we descend below the surface, however, no one else can be seen as the expanse of the deep, blue ocean takes over. The presence of a number of divers is easily catered for among the plentiful marine life that is home to colourful corals, tropical fish, tuna, kingfish, manta rays, sharks and, the star attraction, green turtles.

For animals that struggle to manoeuvre themselves on land, turtles shake off their obvious handicaps under water and assume a gracefulness that leaves you grinning in wonder. As our divemasters Naomi and Nils gather us on the seabed almost 20m below the water’s surface, a green turtle casually flaps by, seemingly suspended in midair and indifferent to our presence. Another pokes its nose out from the coral to check out what all the fuss is about before sinking back into its shelter when it decides we’re not really that interesting. While the strong undercurrent pushes another group of turtles along without even having to flap their curved limbs, it also allows my diving buddy to revel in completing less-than-elegant cartwheels, as if experiencing weightlessness.

Despite thousands of colourful fish that playfully skirt along in the current, it’s hard not to be drawn back to checking out the turtles. Their existence, however, can in part be attributed to the fact the atoll is a protected conservation area – one of only two in the marine-rich waters around Zanzibar. The number of turtles is slowly starting to recover but, almost as if comprehending the seriousness of the situation, nature also played its hand.

As the story goes, as recently as a couple of years ago, locals hunted turtles for their meat and shells. But the inhabitants of one village became extremely ill and their ailments were attributed to the turtle meat they had eaten. Turtles haven’t been hunted by islanders since.

The same can’t be said for other species, however. Fishing is a major part of traditional island life and more than 100 traditional dhows set off each afternoon, returning at daybreak to sell their catch at the daily fish market. It’s a hive of activity as each boat lowers its single sail and anchors close to the beach before the fishermen carry, sometimes drag, the spoils of their night’s work – sharks, rays, tuna and barracuda. An old man, resplendent in his yellow T-shirt, presides with authority over the proceedings as restaurant owners, often from the main centre of Stone Town, and villagers bid for the choicest fish.

The bidding is all over in an instant; most who have gathered won’t pay above market prices, preferring instead to wait until the next dhow unloads its catch. It’s a cheery atmosphere and smiles adorn the faces of the skippers as they reflect on their night’s work.

The lives of the fishermen and dive shop owners are intrinsically linked as both have a vested interest in the number of fish that call Zanzibar home and, likewise, how many tourists converge on the region. It’s a region blessed with natural beauty, an enticing climate, white, sandy beaches, a relaxed way of life and, of course, the brilliant blue waters of the Indian Ocean.

Club party: Pushca returns to save the world at Village Underground

Hang on the tree

Living close to the Games: the lowdown on renting near where the action is happening