“This is not Trainspotting 2,” actor Adam Sinclair says empatically of his new movie Ecstasy, when we meet ahead of the film’s premiere at Ministry of Sound. Despite originating from Irvine Welsh, the mind behind Danny Boyle’s Nineties Brit cinema firecracker, and being set in the same city, Edinburgh, with a similar backdrop of drug culture and those who indulge in it, Ecstasy is far from a sequel. “It’s Irvine’s attempt at a love story,” Sinclair says.

Rather than a group of delinquents actively fuelling their own self-destruction through the needle in their arm, Irvine Welsh’s Ecstasy follows a similarly young group of Edinburgians whose pharmaceutical of choice is E. There’s Sinclair’s Lloyd, Billy Boyd’s DJ-cum-E-prophet Woodsey, and Keram Malicki-Sánchez’s best pal, Ally, all of whom are wrapped up in getting off their heads. Despite this, though, it’s not just a ‘drugs movie’.

“It looks at what ecstasy is – as a drug and as a word,” Boyd (The Lord Of The Rings trilogy) explains. “When people are searching for ecstasy, what is it they’re looking for? Woodsy is looking for some spiritual or religious meaning and sees ecstasy as a means of talking to god; Ally is trying to find it through organic food; and Lloyd’s looking for love.”

Clubhound Lloyd finds it in the arrival of Kristin Kreuk’s (Smallville) Heather, a gorgeous young Canadian who captivates him from the first time he catches sight of her across the dancefloor and whom he sees as his salvation from the dead end life he’s in.

But don’t let these lovelorn themes distract you from the fact that this is Irvine Welsh’s Ecstasy, nor suggest that the provocative author’s source material has been toned down beyond recognition. With a subplot involving Lloyd’s drug-mule employment leading to a host of ‘suppositories’ scenes, and Woodsy’s ‘over-consumption’ resulting in mental institution incarceration akin to Jack Nicholson’s One Flew Over The Cuckoo’s Nest (including a rabble-rousing, “My drugs are better than your drugs” tirade), drugs are far from glamorised here and the journey’s often fraught. 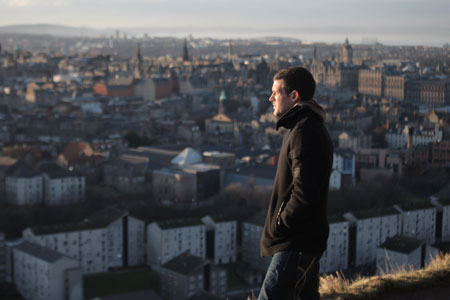 “Irvine Welsh looks at why people take that drug,” Boyd reasons. “In Leith [a working-class area of Edinburgh] there
is no employment, people have no aspiration and so they are looking for a way out. It’s heroin in Trainspotting and
it’s ecstasy here.”

With Nineties nostalgia at a peak right now, and Welsh’s source novel of short stories first published in 1996, you could be forgiven for seeing Ecstasy as a timely adaptation to chime with the zeitgeist for all things pre-millenial, yet it is nothing of the sort.

“It’s not set in any time, not the Nineties specifically,” Boyd says of the film. “I felt that it should have been, but Rob [Heydon, director] didn’t want to make a nostalgia piece and so the music is from all over.” For the lead cast, though, there was an element of nostalgia about the film.

“I was that guy,” Sinclair says of Lloyd, explaining that his research for the pill-popping lead role was carried out a long time before he become involved in the production.

“There are so many parallels to my own personal life. I was never a drug mule, but it is set in the culture that I grew up in. I was the guy in the clubs on top of the speaker with his hands in the air. I lived it,” he recalls, with a knowing glint in his eye.

“I remember in Glasgow, going to a rave in the tunnels in Kelvingrove, which had been shut down. You’d get a torch and follow the music and the police were going in circles trying to find it, but the music was coming from underground.”

While research for the role was not a problem for Sinclair, the production’s long gestation – eight years from Heydon’s initial optioning of the novel to filming last year – brought a host of other concerns.

“I was worried I was getting too old for the part,” the 35-year-old reveals. “I was putting night cream on and had to work on my physique – the middle-age spread was coming on. But I’m a different person now to who I was when I first auditioned for it – then I was a single guy in London, now I am married, with two kids, living in Los Angeles.”

His Californian domicile may have contributed to the funding problem the film faced. Originally conceived as a Scottish-Canadian co-production, [national film agency] Scottish Screen rejected it for not being ‘Scottish enough’, a decision that clearly bemuses Sinclair when we broach the subject. Or as Welsh himself puts it: “They bring some halfwits into these things, I don’t know who makes these decisions but it’s such a stupid thing to say. You have Billy, me, and my book – how can it not be a Scottish film?”

Despite being resolutely Scottish – in origins, execution and humour – the film was shot in Canada, with 10 days of exteriors shot in Edinburgh itself, but when these were shown to Welsh he had certain constructive criticisms.

“We showed it to Irvine and he went – ‘that’s not the Edinburgh I know’,” Sinclair recalls of their picture-postcard flirtations. “We filmed the castle, Princes Street, the Royal Mile, the nice bits, but he got on Google maps and said ‘go there, there, and there’. So we went right in to the heart of Leith. At one point we were by the docks and this big fight kicked off, so I had to put on my thickest Scottish brogue just to get the Americans and Canadians out!” 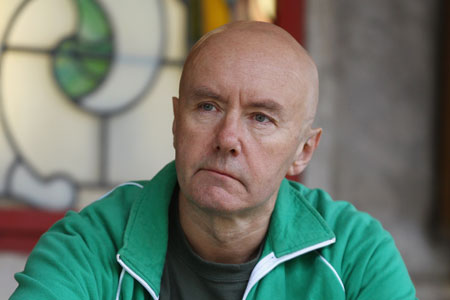 Although intentionally not a nostalgia piece, Ecstasy does hark back to a time when clubbing was a counter-culture activity. “It [clubbing] has become the mainstream now,” Welsh laments.

“Before it was quite transgressive, take a pill and dance in a field or factory, but now it is a consumerist pattern for going out. We have gone from being a cultural society to a consumerist one.”

This eye-on-the-prize mentality also runs through Ecstasy, whose Trainspotting connections serve a large part of the film’s marketing, its poster in particular. Although the focus of the film has widened from that in the book, taking in wider club culture, whereas Welsh’s story had the couple at its heart, this doesn’t worry the writer, who is quite sage when it comes to the adapting of his books, fully understanding they’re going to become, through necessity, a different beast.

The fact that Ecstasy wrankled with Scottish Screen, though, seems to support his theory about the quality of artistic endeavour being judged by those whom it offends.

“When I first started out I thought ‘this is nice’ because I was winding up some wankers,” Welsh recalls of the reaction his writing has engendered in some.

“It was quite good fun and I still think it is a good benchmark for what you do – if you do something that is liked by cool people, that is only half the battle, to be truly great you have got to be detested by wankers as well!” ❚

Irvine Welsh’s Ecstasy is out now through Winstone Films.