Seizing the ‘Sundays: sailing the Whitsundays in style

It’s not often you get to stroke the head of an electric blue and green, six-foot humphead wrasse while hanging off the side of a dingy, let alone be nibbled by what seems like hundreds of brightly coloured parrot fish at the same time. But apparently my half-hour snorkel at Manta Ray Bay, off Hook Island, is fairly standard. So much so that ‘my’ humphead wrasse – a fish so clever that it can even change sex if it needs to – has a name

“That’s George, he’s my favourite. Look at his vivid blue head and lips – he’s a beauty,” shouts Dave, the captain of the Pacific Sunrise, as he throws yet more frozen peas into the azure-blue ocean to swarm my face with a flurry of dramatically-striped fins.

Half the fun of the game is to try and shoot a pea down my snorkel as I immerse myself in the feeding whirlwind of colour, but Dave also likes to point out more of his tropical friends from time to time, too. And as I look around I can see why the captain and his crew are adamant they have the best job in the world. Just metres away is a green turtle majestically gliding through the water.

Apparently he’s ‘stoned’ from eating a jellyfish, which is why he’s so content to swim with us. But maybe he’s just happy to be here. And why wouldn’t you be?

A few days ago I decided to set sail on the open seas for three nights in spite of my motion sickness nightmares. But I’m seeking more than just sun, sea and sex-changing marine life: I want an adventure.

And with the Whitsunday Islands offering a wealth of stunning beaches, secluded lagoons and, of course, some of the best snorkelling and diving spots in the world, it’s the perfect place to start. 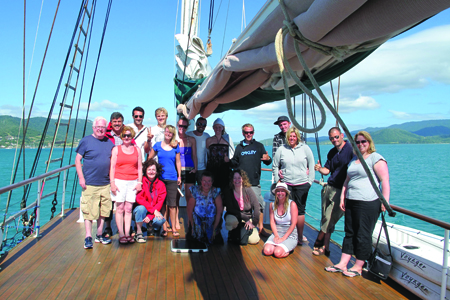 Think white sand, turquoise ocean and more than their fair share of aquatic life. But one of the most breathtakingly beautiful spots is Whitehaven Beach and it’s the only bit of land the Pacific Sunrise guarantees you’ll step foot on during the four-day sail.

Surrounded by the clearest aqua water you’ll ever see and fringed with lush, green vegetation, this picture-perfect stop-off is pretty much how you imagine heaven to be – minus the angels and harps, of course.

Still, if it’s music you want, you just need to put one foot in front of the other, because the sugar-white sand (98 per cent pure silica apparently) is so soft it actually squeaks as you walk on it, and it’s just the thing for polishing up your jewellery, too.

In fact, as one of Australia’s most photographed beaches, chances are you’ve sent your mum and dad a postcard showcasing Whitehaven’s beauty already, so it’s a must-see for any self-respecting flashpacker.

Even as I jump off the dive boat to get my first glimpse of the island, I’m unprepared for just how bright it is. It’s as if the whole place has been drenched in sunshine and a good dose of super-strong bleach for good measure. It literally gleams at you from beneath an expanse of uninterrupted blue sky. The sand is so fine it seems fake; the water is so pristine that the playful stingrays cruising along the shoreline become an unwanted distraction, and the swirling fusion of sand and sea at the island’s Hill Inlet is mesmerising.

If you’re prepared to scale some wonderfully decorative rocks after all that ‘oohing and aahing’, you’ll even find a Robinson Crusoe-style cove that’s completely sheltered from the wind, making it one of the most scenic sunbathing spots in the world. In fact, my new-found sailing friends and I find we’re the only sun worshippers on the bay, so keep the secret to yourself when you visit for a true desert island experience.

The only downside to Whitehaven Beach is leaving and, unfortunately, leaving comes all too soon, with most boats only mooring up for two hours. So, after a quick stop off for Facebook photos from the viewing point, I’m forced to brush down my flip flops (taking any sand from Whitehaven is against the law, can’t think why?) and get back on deck for an afternoon of sailing – the hardcore way. 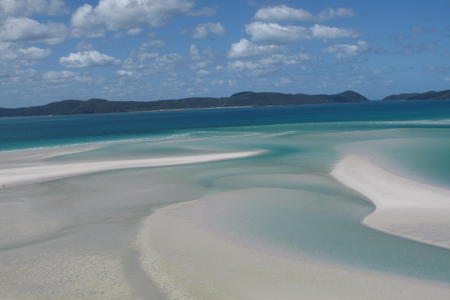 Part of the beauty of being on board a 33-metre bona fide sailing vessel for four days is you actually get to experience real sailing – so long as the wind plays ball, of course. And, as we set off from Whitehaven Beach, the skipper starts handing out the ginger: it’s going to get rough and we’ve got to be ready.

I’m with a motley crew of passengers: two German couples, an Australian hippie who is obsessed with Tasmania; a young French guy who is finding his ginger hair and porcelain-white skin fairly incompatible with the Whitsundays sun; a fun elderly Irish couple celebrating their wedding anniversary; and a group of Canadian friends, who so far haven’t even seen a kangaroo along their travels so are becoming increasingly giddy from all the marine life. In short, we’re an odd bunch but we’re getting on famously and
we’re all excited to sail.

On the first day, as we board the boat at Airlie Beach’s Abel Point Marina, we proudly announce we’ve never been seasick. “That’s for girls,” my Paddy pal declares bluntly. “There’ll be no ginger for me.” But within 15 minutes of the sails going up, the ketch is practically on its side (which the skipper informs me is known as heeling) and the majority of my ‘sea-loving’ friends are throwing up and begging for mercy – or at least for the engine to be started up. Nice. But even as my stomach lurches climbing another huge wave, it’s still a fantastic experience, especially when I get to help out with the rigging.

While I place a rope of insignificant importance in a figure of eight on deck, the more butch among us are hanging from the ropes as if their lives depend on it and it’s a genuine thrill to see the boat sailing, even if we are losing our lunch overboard. And then, just as we’re all settling down to drink cocktails and discuss how Captain Cook had it easy in his day, disaster strikes: a rope has snapped and the main sail is billowing fiercely in the strong easterly wind.

All too quickly we realise we haven’t got a clue what to do or where to stand; thoughts of buying a boat back home and cruising round the coastline suddenly disperse. Thankfully though, the crew jump into action and Leon, the ship’s first mate, starts climbing the mast like Tarzan to make sure we don’t lose the sail and our pride in the process. It’s exciting stuff and despite getting a good drenching on deck, we all stand out to watch the action. 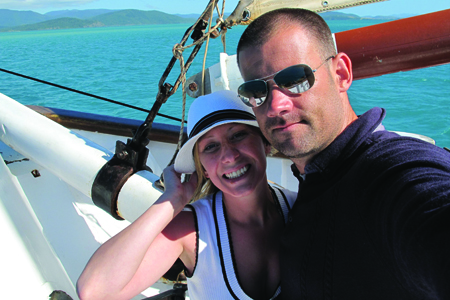 If you’re not an adrenaline junkie, you don’t like snorkelling (amazingly there were at least four people on my trip that had no intention of setting foot in the sea at all) and you’re not impressed by huge green sea turtles gliding past you first thing in the morning (in which case you need to take a long, hard look at yourself), I can guarantee it’s still worth boarding the Pacific Sunrise just for its food.

Alan, the ship’s humble Scottish chef is, in short, a culinary genius and I can honestly say that his vastly better than average gastro pub-style grub was the best I tasted while on my travels. In fact, the crew prides itself on its five-star fare and the nightly antipasto platter that’s served on deck as the sun sets – and I sip my fourth gin and tonic of the day – quickly becomes something I hanker for after breakfast each morning.

The menu changes seasonally, but if you’re treated to the chicken and vegetable pot pie, you’re onto a winner. In fact, I can recall each day just by the breakfast: Eggs Benedict with smoked salmon, spinach and avocado = an awesome day of snorkelling at Tongue Bay. Blueberry pancakes drenched in maple syrup = exploring the rich coral reefs at Catamaran Bay.

And the boat’s warm timber bar and restaurant makes the experience all the more inviting. There’s no buffet-style dish-up on deck for 40 people on this boat. In fact, the vessel sleeps a maximum of 21 passengers and each night follows a similar pattern: loud raucous laughter over cocktails followed by silence as everyone tucks into their mouthwatering chicken/fish/duck/lamb. It’s only
after the meal has been fully enjoyed and fully appreciated that the excited chatter from the day starts up again.

Everyone on board is on their first sailing trip. And everyone I speak to considers it to be the highlight of their trip so far. Including myself. In fact, as we pull up to Abel Point Marina on our last day, a wave of emotion washes over me: excitement to see land for the first time in two days, but also a sadness at leaving the hugely entertaining crew and my new sailing friends behind. All that snorkelling, sailing and eating has bonded us and we’re now a little family.

The last word from skipper Dave says it all: “It’s been a bloody good trip guys, now get out there and sink a beer for me.”
It’s an unfortunate turn of phrase Dave, but you’re the captain.

Holding on to Australia

The Girls are mad in Torquay Australia!!!