The urge to hum the tune was resisted, but not the next thing out of my mouth: “We’re going to need a bigger boat“, I lamented to the 18 other adventure seekers about to board the what-I-saw-as-too-small-of-a-craft.

As they chuckled I thought about how I so wasn’t kidding. The sun was still deciding whether or not to appear as we boarded the Calypso Star from the sleepy tuna fishing town of Port Lincoln, South Australia.

I had been enjoying the area for the previous two days but it was this daytrip to see great white sharks that had engulfed my thoughts. I had other fun adventures lined up for the area – like swimming with wild Australian sea lions – but I couldn’t seem to relax with the knowledge of voluntarily getting in the water with the dinosaurs of the deep. 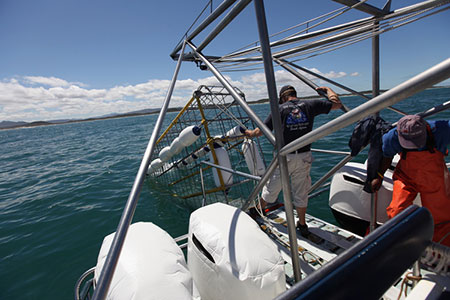 “A shark could poke its head through those holes,’’ I lamented to skipper Andrew Wright.

“Yes it could,’’ he said. “But remember, it cannot open its mouth if its head is stuck in there.’’ Oh good. Such a comforting thought.

Being an animal lover and a scuba diver, I am normally excited to see creatures in their natural environment. However, today I was full of nerves and kept asking myself if I was crazy. The fact I kept talking to myself was my first clue that perhaps I was slowly going crazy because of this trip. I could not wait for the day to be over.

As it turns out, the two-and-a-half hour boat ride out to the Neptune Islands – where a colony of New Zealand fur seals lives – was the part of the day to be concerned about. Only three of the guests, including myself, did not get sea sick on the rough seas, exacerbated by the overcast weather of the day.

Okay, so I did down two motion sickness pills and take to lying still on one of the couch’s inside the boat while trying to plug my ears from the sounds of others near me vomiting, but I didn’t actually join them in that miserable experience, thank God.

Instead, I forced myself to stop picturing a white shark attacking our cage. After what seemed like an eternity, we finally arrived at our destination. I sat inside, looking out the window while the crew prepared to lure in the sharks.

“I’m NOT getting in there,’’ I thought to myself as I stared into the dark blue ocean. Of course, no one could hear me, since I was talking to myself again. 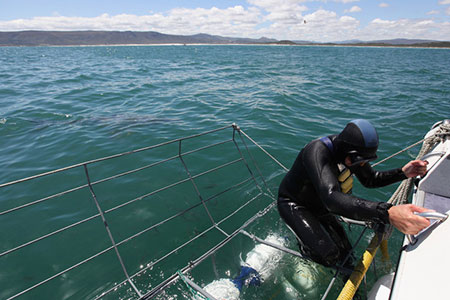 Plus most of the others who had recovered enough were now at the back of the boat eagerly waiting to spot the first shark. I could see the water turning eerily red as the crew threw chum and tuna into the water to entice the creatures. Bets were taken on how long it would be until the first great white appeared. After about 40 minutes I heard splashing,shouts and cheers so finally decided to join everyone outside.

Our first shark arrived – a baby of about 3.5m that thrashed around at the surface as it tore the chunk of tuna off what looked like a long fishing line. Another, larger, shark soon followed and it was time for the ‘fun’ to begin. I decided to be in the second cage. I’m not sure why.

Deep down I think it was in case something went wrong – any problems could be ‘ironed out’ with the people in
cage one. Kind of like how I only like to swim at the beach if I’m in the middle of a group of people – you know, so any sharks could attack them first. 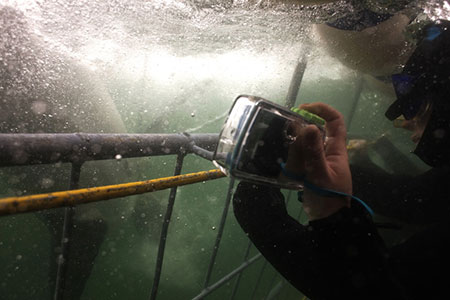 Four people at a time entered the cage – which was lowered a few metres into the water – for a 45-minute session, all breathing through regulators. Those still on the boat could see the sharks as they thrashed around and wondered what it was like inside the cage.

In what seemed like only a few minutes, it was my group’s turn to enter the cage. I was last in – clambering through the cage door at the top, worried about my feet sticking out through the viewing window too far and being chopped off by a hungry carnivore as I climbed into our steel safety net thinking “oh crap”.

At first, nothing. All I could hear were bubbles from our regulators and our excited breathing. Myself, an American, a Mexican and a German, were looking all around each side of the cage.

Suddenly, one of the guys excitedly pointed in front of us – there was a great white gliding through the water in front and above us as it lunged at a chunk of tuna. My nerves suddenly disappeared and all I could think of was how beautiful the creature actually was. Adrenalin was pumping as the shark disappeared again into the blue depths.

We all impatiently looked around again for what seemed like ages before I suddenly spotted a shark to the bottom right of me. I quickly turned around to alert the others, to find them pointing in front of the cage where a second shark was chowing down on its lunch in a fierce display of gums and razor sharp teeth. 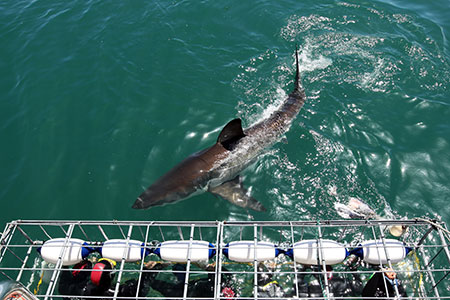 Soon, a great white slowly glided past the front of the cage, seemingly checking us all out. I will always remember the eerie feeling of being stared at by such a piercing black eye. As it checked us out, the four of us stood still (well, floated) and stared back at the magnificent yet simple creature before us.

For some reason, I was surprised by the silence of the sharks. In fact, the only noise created by the shark was the thrashing water when grabbing the tuna or clanking sounds when it bit on the cage or the boat.

At one point, one of the sharks bashed into the bottom of our cage jutting its head through the bottom viewing window. And which part of the window did this happen, you ask? Well, mine. Of course. Murphy’s Law at its best. I jumped to the back of the cage as the shark’s nose came towards me.

Luckily, by then all my nerves had disappeared and I was simply excited and in awe of the sharks and wanted to see more of them. We were lucky. For such an overcast day our group saw five sharks in total. On clearer days, up to 14 sharks have been spotted.

Although shivering from the cold I did not want to exit our cell until our time was up, which seemed all too soon. After we climbed out and dried off, Skipper Andrew asked us what we thought. “Holy moly. I can’t wait to do that again!“

The best players of Australia’s State of Origin

One weekend in Manhattan