They say the best horror films combine extraordinary circumstances with ordinary settings. But these days with all the haunted houses, murderous clowns and deranged mothers on our screens, it’s difficult to be original. Kimble Rendall’s Australian film, Bait 3D appeals to our primal fear of sharks, which is nothing new, but sharks in a supermarket? While the very premise sounds like a farce, you have to admit, it’s definitely unique.

“The producer, Chris Brown, called me and asked if I’d like to come and do a new Aussie film,” explains director Kimble Rendall. “I asked about it and he said: ‘sharks in a supermarket’. I said perfect and booked my ticket.”

Rendall, who has worked on some of the largest films in Australia, and was the Second Unit Director on The Matrix Trilogy was finishing up on The Killer Elite in Melbourne when he was approached. He tells TNT he was immediately attracted to the project.

Like most people, Rendall is fascinated and terrified by sharks. And as a filmmaker, he was shaped by films like Jaws.

“Jaws is a classic film and I am definitely inspired by it. It’s a masterpiece,” he says. “But we never set out to do a better film than Jaws, it’s not possible. Ours is a different style, but it’s an influence and it inspired me to go and make films. “

While Jaws had sharks swimming around in their natural environment, Bait places them in a supermarket and carpark. How the hell does one come across great white sharks in a supermarket, you ask? Well, that’s where the third element of surprise comes into play. A tsunami hits the Gold Coast, trapping a group of mismatched characters on the shelves of a supermarket. 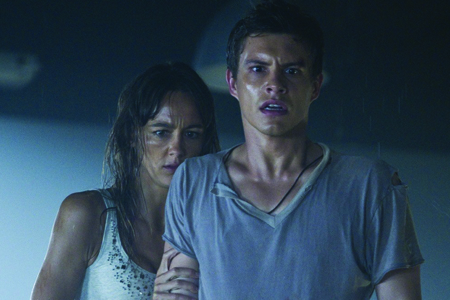 “It was almost like a theatre production,” recalls Rendall. “The actors were all up on the supermarket shelves, so it was like being on stage.”

Josh (played by Xavier Samuel, The Twilight Saga: Eclipse) is the film’s protagonist, playing the unassuming nice guy stricken by grief (a shark attack kills his best friend a year earlier). But he also plays the tough guy with equal measure.

“He was meant to be a normal suburban guy, someone you’d believe would be a lifeguard,” explains Rendall. “But also someone who could go from the worst moment in his life to then going and saving all these people.”

Indeed, one scene has him swimming to an underground carpark to source a gun and shoot one of the sharks between the eyes. He does this as if he’s on the set of a Die Hard film. (If Die Hard was underwater and the bad guys were sharks.)

“I said to Xavier: you’re going to become an action hero,” laughs Rendall. “He got right into it, he’s really fit too.”

The love story arrives via Josh and his ex-girlfriend Tina (Sharni Vinson, Home & Away), who meet again by chance in the supermarket. As if running into your ex isn’t frightening enough, the robbery and tsunami follow in quick succession.

Downstairs in the carpark, Kyle (Lincoln Lewis, Home & Away) is trapped with his high-maintenance girlfriend and her precious dog. Rendall is not afraid to admit the set looked like a soapie reunion: “they’re all trained by Home and Away. Our acting school.”

There’s something eerie about setting a film in water. You’ve got the element of danger that comes from the unknown – the what lies beneath. And you’ve also got the chance to push your actors to the extreme, working them to the bone in a cold, damp set.
Rendall admits he didn’t cotton wool his actors.

“They knew what they were getting in for. It was uncomfortable but that’s the gig. It was also really noisy in the set with the shark, it sounded like a train.”

It was no walk in the park for Rendall either, not only was he in charge of a bunch of actors, he was also controlling three large-scale, mechanical sharks.

“Every shot was challenging. You have to work out the cameras which are heavy and then you’d spend hours getting the 3D right. I guess the hardest part was the animatronic shark, getting it in the right place at the right time because it’s controlled by hydraulics.” 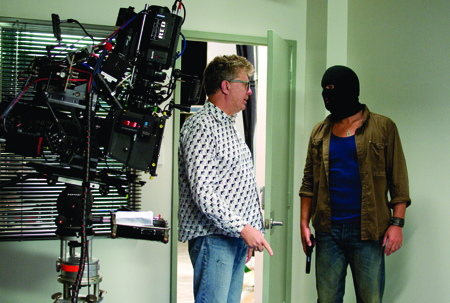 Julian McMahon (Nip Tuck) is arguably the film’s biggest star as well as one of Australia’s biggest exports. Rendall has fond recollections of what McMahon brought to the shoot.

“Well, he brought lots of ice cream,” jokes Rendall. “On Friday afternoon he’d get the ice-cream truck to pull up and he’d feed the whole crew. He also organised massages. He was really generous.

“When I first met him I had a hook up line on Skype I wasn’t sure what type of character he was. He’s well known on TV and a few films in the US so I said to him: you’d be the bad guy but there’s also redemption with a slight religious overtones,” explains Rendall.

“Not that it’s that deep and meaningful, obviously. But as an actor it gives them something to grab onto,” he admits.

The religious overtones are blink and you’ll miss them. In one scene, McMahon’s character, who goes from robber to hero, delivers the line: “if you take the hand of the devil, God will make you pay.” But don’t be too concerned, there isn’t a greater message that you need to look out for.

“It’s just for fun,” says Rendall. “Maybe take the message that if you see a shark in the water – don’t jump in.”

Bait 3D was a surprise entrant at the Venice international Film Festival this year – the only Aussie film to be on the bill.

“It was one of only 50 films worldwide too, so I was very proud. It was interesting that a horror film made it into the festival but the (film festival) director really liked it.

The reception in Venice was exceptional, much to Rendall’s delight.

“The Italians loved it. They’d laugh, cheer and clap. They appreciated the artistry, they clapped us for our work, and they thanked us for not killing certain people.”

In fact, one of the funniest scenes in the film is delivered by one of the minor characters who enters the water covering himself in armour made from shopping baskets and duct tape.

“The audience in Venice were killing themselves laughing,” Rendall says of this scene. “At first the studio said we should take it out because the audience are just going to laugh at it. But I said, that’s right, that’s our intention. Although by the end of the scene you won’t be laughing.”

The film does have its moments of poignancy and although there is no greater message to take, it was just a week before the film’s release that Ron Taylor, the shark expert and advisor on Jaws died, bringing to the headlines again the contentious issue of diving with sharks. While some people think it’s great for the Australian tourism industry, others believe it changes a shark’s behaviour and increases the risk to humans. Rendall admits he won’t be putting himself in a cage vis-à-vis with a real life great white.

“I couldn’t think of anything worse. It would be so terrifying,” he shudders. “I wouldn’t do it. If I had a few drinks, maybe. Seeing them when they break through the bars just scares me too much. Would you do it?” I tell him that with a job like this, it’s definitely on the cards and he makes a pact with me to do it in the future.

For now though, we both concur that we’ll stick to watching films like Bait.

Bait 3D is in cinemas now. See tntdownunder.com for the film review or facebook.com/Bait3D for more.

Opinion: Why hasn’t Matthew Wright been fired yet?

My London: John Tremayne, head chef at The White Swan