Even in my wetsuit, I’m freezing cold and my fingers feel akin to the contents of a frost-crusted box of fishfingers. The wind is so fierce that the seagulls are practically flying backwards.

Achill Island, part of County Mayo in western Ireland, is a wild place. On its west coast, the two-mile long, broad, sandy Keel Beach is framed by a trio of treeless mountains and the dark Minaun Cliffs. Rain clouds blow towards the island, across the ocean, in an almost constant threat of bad weather – but the same wind blows in plenty of visitors. In the blustery winter months, kitesurfers arrive on Achill from all over the world to do battle with the Atlantic waves.

That’s why I’m here, learning to kitesurf with Francois Colussi, a 34-year-old Frenchman who blew into Achill himself three years ago, took over a local bar in the foothills of Slievemore mountain, and turned it into a kitesurfing school, hostel and pizza restaurant called Pure Magic. 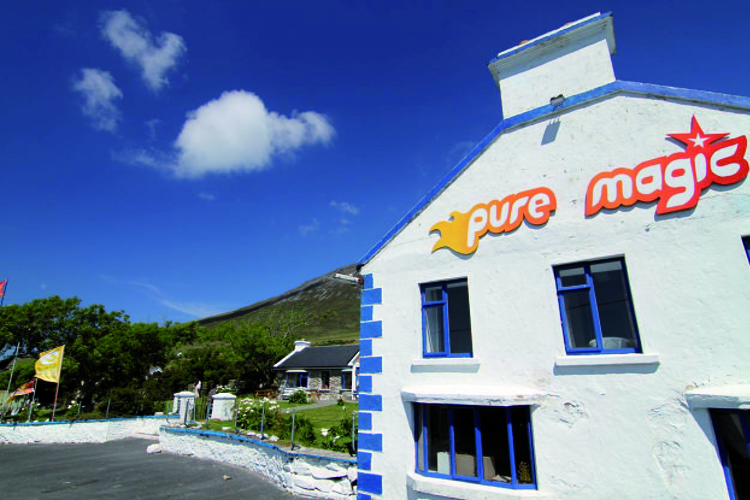 “Ireland is well-known for its big, big swell,” says Colussi, forcing his fingers through salt-stiffened hair. “Kitesurfing is playing with these waves; it’s like a symphony of the waves and the rider.” The Kite Surf Pro World Cup this October attracted over 30 world-class kitesurfers to Achill’s stormy seas, firmly planting this small island on the sport’s map. But you don’t have to be a professional athlete to kitesurf in Keel. “It’s one of the most extreme sports, but the most accessible. It’s much easier that surfing or windsurfing. You can learn in a weekend,” Colussi assures me. “You don’t need huge upper body strength – you’re powered by the wind.”

I begin with a trainer kite on land. It only measures 2.5sqm, but still threatens to lift me up into the air and dump me back down on the sea-hardened sand. Colussi hugs me from behind, guiding my arms with his hands, showing me how to use the lines, pulling them in and out to make the kite dive and rise in a figure of eight. “Ninety-five per cent of kitesurfing is how to fly the kite,” he says. “It’s like learning to dance, and the kite is your partner. At first, you don’t know when to lean forward a little, to take one step back, to take a step forward.”

After mastering the dance on dry land, I give it a go in the ice-cold water, but still with no board, just standing and being dragged through the waves, battling for control. The final step is to use a board, stand up and surf. This is the most difficult dance of all, and the most exciting. “It’s how you make love with the waves,” Colussi says.

You can travel up to 50kmph when kitesurfing, which is way faster than most things move on Achill. This is the sort of island on which sheep and cows often block the road, and can be found wandering through the ruins of deserted villages. Local farmers take their tractors to patrol the beach for driftwood, and you’ll spot donkeys and reeks of hay. In many ways, water defines Achill – the ocean batters the coast, and soft rain falls almost constantly.

With no street lights, the nights are long and bright with stars. But there are signs of life in the darkness, notably a lively après-kitesurfing scene in Pure Magic’s bar. Many of these sport scenesters are on their Apple Airs, Facebooking friends in Hawaii, Morocco, Brazil and the Cape Verde islands – the top kitesurfing destinations. But according to Kirsty Jones, a Welsh world champion kitesurfer I get chatting to in Pure Magic, Achill is the best. “The ocean is pure, Atlantic water. You feel a slap in the face like – Yes! I’m alive!” Pure Magic, in Dugort in the north of the island, serves a fine pizza, but if you want a Guinness you have to walk further west to the village of Keel and the Annexe Inn, where you’ll find a band of players on accordion, bodhran (traditional Irish drum) and penny whistle, belting out folk songs.

The next morning the waves are high, the wind strong, and the water bracing. I unroll my kite on the beach. A rainbow arches right over the island as far as the dark distant cliffs. Colussi reaches up and tries to touch where it falls. “There’s loads of special places in the world, but none of them are Achill,” he says. “There’s something magical here.”

Keep reading for our budget guide and travel information

Stop into Blackfield (above), a cafe combined with a surf school and clothing shop selling threads they design themselves. Coffee and cake costs around £5.  blackfield.com

At one of the island’s liveliest bars, Annexe Inn (left), there’s a pool table and often a session of traditional Irish music. If you lean against the bar, you won’t be left for long on your own as someone will always come up and talk to you. Pints cost approx £3. facebook.com/theannexeinn

The self-catering Minaun Cliff Cottages (left) look out over the two-mile Keel Beach across to the mountains. Just moments from the sea, they’re a cosy haven from the winds. There are turf fires, wood floors, and windows big enough to admire the stunning views. From £325 a week, sleeps four. minauncliffcottages.com

As well as a kitesurfing school and hostel, Pure Magic (above) is the finest pizzeria on the island. Staff are mostly French and the pizzas are named after the mountains, cliffs and villages on the island.  Around £12 for a meal.  puremagic.ie/achill

Sports fans will appreciate Gielty’s Clew Bay, which proudly boasts the largest TV screen on the island and is the only pub in the area with Sky Sports. Pints from approx £3. gieltys.com

Pure Magic has the atmosphere of a European hostel planted on to an Irish island. Bright, simple rooms are themed on different countries including Morocco, Kenya, and Brazil. Breakfast is included. From £28 per night.  puremagic.ie/achill

The restaurant at Bervie Guesthouse (above) serves local seafood and lamb among other hearty dishes on the daily changing menu. Cream teas are also available. Evening meals from £36; cream tea £5.70. bervie-guesthouse-achill.com

The Valley House Holiday Hostel and Bar is a lively pub with a turf fire to warm up beside, pool competitions, darts and regular live music sessions. Pints approx £3. valley-house.com

Bervie Guesthouse is a stylish beachside bed and breakfast in a restored coastguard station. Turf fires burn in the lounge, and when the weather’s fine there‘s a lovely garden and even a tiny art gallery. Rooms from £40 per night. bervie-guesthouse-achill.com

Fly from London Gatwick to Knock from £59 return with Aer Lingus.  aerlingus.com

Achill is a 75-minute drive from the airport in Knock.

The weirdest ways to spend a lottery win