While there’s a real appeal to the idea of a winter break in Stockholm – with glögg (mulled wine), candles and Christmas markets creating a cosy vibe – ask any Stockholmer when the best time to visit their city is and nine times out of 10 they’ll answer, “in the summer”. This is when the city comes back to life after months of hibernation, with locals desperate to peel back the layers and fully embrace the new-found warmth and light.

Made up of one third greenery, one third land and one third water, Stockholm is a stunning sight in the sunshine, when the water glimmers and each of its 14 islands beckons with their own distinctive outdoor attractions. But despite the physical beauty of the surroundings, summer in Stockholm is as much a state of mind as it is sunny skies and long evenings – and the hedonistic vibe is addictive.

Lake Mälaren, the expanse of water upon which much of the city is built, is clean enough to swim in, even in the city centre – a point of great pride for most locals. From May onwards, residents make the most of this at various spots in the centre, such as the lovely island of Skeppsholmen, in the heart of Stockholm. Two of the best swimming spots are a little further out, however: trendy Långholmsbadet, on the verdant island of Långholmen (tip: get there early to mark out your space) and the rocky ‘cliffs’ of Fredhällsbadet on Kungsholmen. If you head to the latter, do as the locals do and climb down the rough steps from Snoilskyvägen or Atterbomsvägen, and then jump into the deep, clear water from the rocky outcrop.

Midsummer in the archipelago

The pagan Midsummer festival on June 23-25 is a big deal in Sweden – a chance to celebrate the light and warmth that evades the country for two thirds of the year. Don’t stay in Stockholm at this time, though, as everyone heads to one of the 30,000 islands of the archipelago. Waxholm and Grinda are deservedly popular and easily reachable islands to decamp to – but be prepared for boats to rival Noah’s Ark in terms of crowding. Midsummer Eve is an outdoor affair, marked with garlands of flowers, maypole dancing and traditional smörgåsbord – which might not sound like a barrel of laughs, but once the brännvin (aka schnapps) starts flowing, it’s a riot of a night that runs into the wee hours and rivals New Year’s Eve for its party spirit.

Stockholm’s ‘Sunday destination’, Djurgården (pronounced ‘your-gore-den’) is a green oasis of forests and cycle paths. The island really comes into its own in summer for being the site of two of Stockholm’s best-loved outdoor venues: Gröna Lund theme park and, a five-minute walk away, Blå Porten café. The former is Sweden’s oldest amusement park, and
a real symbol of summer; it has kitsch charm aplenty and hosts rock/ pop concerts in the evenings that draw an up-for-it crowd. Blå Porten (‘Blue Door’), meanwhile, is the absolute don’t-miss outdoor lunch spot, drawing locals of all stripes to its courtyard space. Sitting in the sunshine enjoying the homely grub with a background hum of raucous chat, you’ll get an unrivalled feel-good summer vibe.

Throughout August, locals partake in these legendary parties – called kräftskiva – that provide a chance to see Swedes at their rowdiest. The late-summer seasonal feasts are a chance for friends to get together and chow down on cold crayfish and sink a few beers. Tables are decorated with colourful paper lanterns, everyone wears a comic paper hat and bib, and much merriment is had all round, especially once the schnapps frees up everyone’s inhibitions.

Popaganda in late August is a two-day indie-rock/ electro music festival that’s distinctly Swedish, and oh-so-very stylish; situated around the open-air swimming pool of Eriksbadet on Södermalm, Stockholm’s large southern island, it draws a fashion-conscious but sociable crowd. Södermalm itself is a great summer spot, with dozens of cool bars and cafés to hang out in and watch the world go by 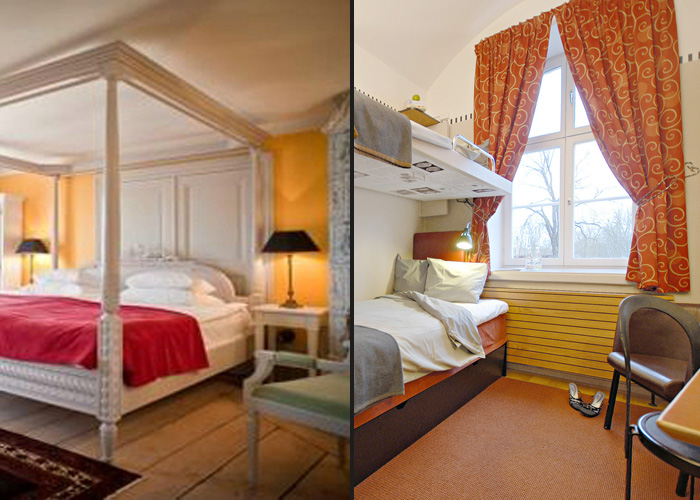 Gildas Rum is a favoured café among the trendy locals of Södermalm, being perfectly situated opposite Nytorget – a grassy square and prime summer hangout. Order one of the delicious sandwiches and enjoy it at one of the outdoor tables. Mains from £6. (Skånegatan 79, tel. 08 694 7590)

The terrace of Södra Bar, previously known as Mosebacke, is one of Stockholm’s hottest summer nightspots, thriving with a twenty- and thirtysomething crowd enjoying the cutting-edge live music acts and fabulous views of the harbour. Beers from £3.  sodrateatern.com/sv

Located in a former prison, the Långholmen Youth Hostel is simply furnished, but has a warmer vibe than in its past. It also has a lovely summer café and is located near one of the city’s best beaches, Långholmsbadet. Dorm beds from £25pn.  langholmen.com

The open-air Nyfiken Gul grill is also located on Södermalm, serving barbecued meat, fish and veggie dishes to a lively crowd during the summer months. There’s sometimes a queue for tables, but you can get a beer at the bar and let the tasty aromas awaken your appetite while you wait. Mains from £11. nyfikengul.se

Open in June, July and August, the bar at Gondolen restaurant offers some of the best views in Stockholm. Reached via the famous Katarina lift, next to Slussen, it draws a mixed crowd of locals and tourists enjoying well-made cocktails and panoramic sunsets. Glasses of wine from £7.20.   eriks.se

One of Stockholm’s newest hotels,  Hellstens Malmgård, on Södermalm, is located near Stockholm’s hippest nightlife, cafés and shops. Housed in a converted mansion, the rooms have a lovely airy vibe and a garden where breakfast is served. Doubles from £129pn.  hellstensmalmgard.se

For something altogether more sophisticated, head to Gamla Stan (the Old Town) for Michelin-starred  Frantzén & Lindeberg, serving contemporary Swedish cuisine. The vegetables and herbs come from the restaurant garden, and the fish and meat from local farmers and fishermen. Multi-course menus from £150.  frantzen-lindeberg.com

Gerda Bar on Kungsholmen has a distinct summer feel, by virtue of the fact that it’s located on a boat with a retractable roof. Attracting a smart, moneyed crowd, it’s a good spot to sip a cocktail (from £8) and enjoy the gentle breeze. gerdabarbrasserie.se

In the heart of the city, yet in a supremely peaceful spot, Hotel Skeppsholmen is one of the most stylish hotels in Stockholm. The vibe may be laidback, but attention to detail is second-to-none, and the tiny island – ringed with moored-up boats – offers some top cultural attractions. Doubles from £167pn. hotelskeppsholmen.com

Wimbledon 2013: Serena Williams is knocked out of Wimbledon by world number 23 Sabine Lisicki