Morzine in France is the destination for those who want to ski in style without breaking the bank. TNT’s Janine Kelso tried out some discount luxury on the slopes.

It’s a scene that’s fit for a James Bond movie; with a cup of the finest French vin blanc in hand, I’m wallowing in an outdoor hot tub in a mountain lair overlooking the snowy peaks and twinkling lights of the picture-pretty village of Morzine. There might be no 007-style rooftop heli-pad or private cinema, but I’m feeling as spoilt as a Bond girl.

After a soak in the hot tub and a teeth-chattering roll in the snow (the other half’s ‘hilarious’ idea), I head for the sauna before feasting on an exquisite four-course meal (followed by cheese and port) beside a roaring log fire. It has all the ingredients of the swishest chalet but it’s not full of middle-aged folk and I don’t need a secret agent’s limitless expense account to stay there. This is what’s known as ‘affordable luxury,’ A-list pampering at Z-list prices. 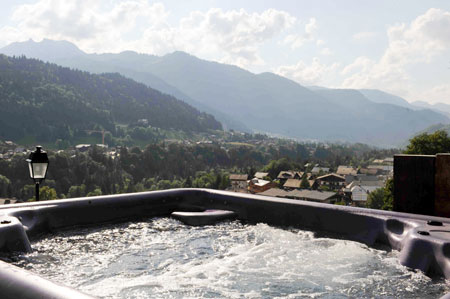 I’m spending the weekend at Chalet Amis, in Morzine, an unpretentious French alpine resort just over an hour’s drive from Geneva. You won’t find the snooty slave-to-fashion ski posers here; they’re up the road in Chamonix, darling.

Morzine itself is a characterful working town with narrow lanes lined with wooden chalets and cutesy cafes serving up richly spiced vin chaud and hot chocolate.

When it comes to skiing, Morzine is not to be sniffed at. Within spitting distance of our chalet is the mammoth Portes de Soleil ski area, an adventure playground of 280 ski runs and 197 ski lifts; that’s 650km of slopes connecting 12 resorts.

Morzine-Les Gets itself covers a not-too-shabby 49 lifts and 64 runs, many of which are prettily flanked by pine trees. There are slopes to suit all levels, plus plenty of off-piste opportunities for thrill seekers.

Off the slopes, you’ll find a deluge of other activities including ice climbing, paragliding and speed riding, Nordic walking, ice-diving, snow-shoeing and hot-air balloon rides.

After a fun-filled day of skiing, we have a go at nocturnal sledging. I fly down the slopes at breakneck speed, trying to stay on-piste as the icy air pricks my cheeks. It’s an eerie-yet- exhilarating feeling, whizzing down the dark and desolate slopes. Keen to stay at the front of the group and struggling to operate my brakes, I dramatically fly off the slope into fresh powder, snow finding its way into every extremity.

Once we return to the chalet, chilled to the bone and cheeks flushed after a day of high-octane fun, I head straight to the hot tub to defrost and recount the day’s adventures. I’m sure 007 would approve. 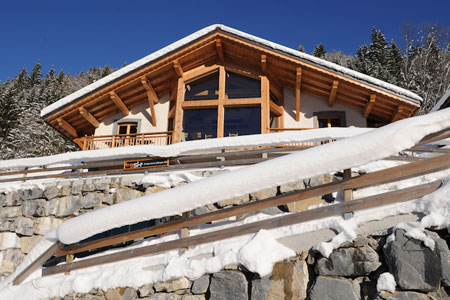 Bar hopping
Morzine’s nightlife might not jump like party capital Chamonix, but it’s still got plenty to keep you entertained until the early hours. Enjoy strong beer Mutzig at Bar Robinson, otherwise known as Robbo’s, a popular laidback watering hole run by an elderly couple. The town’s two clubs include Le Paradis, which has poles for swinging around, and L’Opera, which has a dancer’s cage.

Night skiing
If you didn’t get enough on-piste fun during the day, Pleney ski-run opens at night every Thursday.

Icy does it
The indoor ice rink at Palais des Sports is open from 9-11pm on Tuesdays and Thursdays. Check out an ice hockey match on Saturday nights at 8.30pm and on Wednesdays at 9.30pm.

WHEN TO GO: Mid-December to late April.
GETTING THERE: Fly direct to Geneva from London with easyJet from £23.99.
GETTING AROUND: TG Ski offers a free chauffeur service to the slopes. The town itself is easily explored on foot.
CURRENCY: Euro. 1 GBP = 1.19 EUR.
LANGUAGE: French.
GOING OUT: A beer is €4.
GET MORE INFO: tgski.com and skimorzine.com. Book chalets or hotels in ski resorts all over the world by visiting skiline.co.uk.

» Janine Kelso stayed at Chalet Amis with TG Ski (01452 731000; tgski.co.uk), which costs from £499 a week, including four-course dinners and unlimited wine, a chauffeur to the slope and back, cooked breakfasts and hot wake-up drinks. Hire ski equipment with doorstepskis.com who deliver boots and skis direct to your chalet.

Monkey with the best view