Australia Day, January 26, is upon us again and thankfully London can put on a party as good as our chums in the southern hemisphere.

It is one day of the year when Australians, decked out in green and gold, descend on London’s watering holes to celebrate what it is to be from the land Down Under.

Marking the day the British landed at Sydney Cove, most of the 600,000 Australians living in London will rock out to Cold Chisel, wage bets on the Triple J Hottest 100 and sink plenty of booze. Even non-Australians are bound to be lured into the merrymaking with all the joie de vivre on display.

As usual, there is no shortage of things to do or places to go.

Dive into the Tim Tams and Twisties and sink the Tooheys, it’s time to celebrate Australia Day! 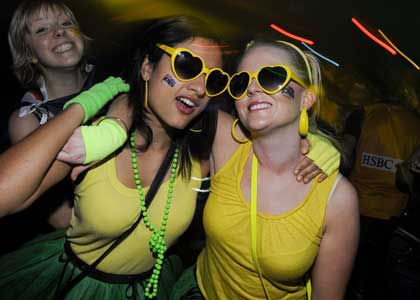 We enjoy a shindig as much as the next Londoner and following an enormously successful 2010 party at Infernos on Clapham High Street, this year’s Australia Day event on Sunday, January 23, will be bigger and better than ever.

There’ll be DJs, bands, Aussie beers and pies. Dress up as a famous Australian and have a crack at winning a trip with On The Go Tours. There’ll be a free drink on entry, too.

As well as the trusted Antipodean haunts, including Walkabout pubs, the Church and Redback Tavern, other venues in London will be vying for your pride and patriotism.

Waxy O’Connor’s in Soho is throwing parties on Sunday, January 23 and on Australia Day. A queue of people snaked out the door last year, so expect it to be packed to the rafters.

Australian beers are just £2 a pop at the Billabong bar in Wimbledon. They’ll have live music on both the Sunday and Wednesday, plus prizes for the best-dressed Australian. You can also play the Ashes game on the bar’s Wii, if only to prove you’re not as toothless as

The Elk Bar in Fulham Broadway will line your gut with free sausages that you can wash down with £2.75 Mojitos and £2 VBs on the Wednesday.

Jetlag Sports Bar in Fitzrovia is laying on kangaroo steaks, Aussie snacks and James Boag’s beers on Australia Day. It will also screen classic Aussie flick The Castle, followed by a Heath Ledger double bill in its cinema lounge.

The Bison and Bird on Clapham High Street will also put on £2 VBs and Bundy and Cokes and £5 Snakebite jugs.

Check out Aquum, also on Clapham High Street, for 2 for 1 drinks including Crown Lager, Bundaberg Rum and Coopers Pale Ale as well as a DJ and an Aussie BBQ.

Or try a spot of Australian wine tasting on Thursday Jan 27 at belowzerolondon.com. 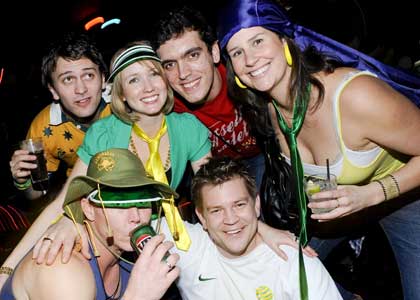 A taste of home

If mum forgot to send you a care package from home, you might like to turn to Sanza.co.uk

The online shop is chock-full of Australia Day essentials in preparation for one of its busiest days of the year.

“In the week leading up to Australia Day we experience five-times the normal level of business,” says Erin Abrams.

“Twisties, Tim Tams and Shapes, plus lots and lots of Australia beer tends to fly off the shelves. Australian tattoos and flags also sell like hotcakes,” she added.

With Australia Day celebrations falling midweek, realistically, you’ll wake up as dry as a dead dingo’s donger, with Buckley’s of making into work.

We’re not condoning chucking a sickie but as a service to our loyal readers, we’ve come up with some plausible excuses.

Try: “My eye got infected in a Vegemite fight” or “My mate did his best ‘this is a knife’ impression and accidentally stabbed me” or “My family’s pet koala died and I have to attend the funeral via Skype”.

If you’re ringing in with a case of  ‘poisoning from undercooked BBQ food’, don’t forget to dry retch and tip some water into the toilet as you’re speaking to your boss. It adds a certain authenticity.

Now in its 18th year, the Triple J Hottest 100 poll has become an Australia Day institution but it wasn’t always the slick operation it is now.

It kicked off with the vague idea to open up the playlist of Australia’s independent youth broadcaster, ABC’s Triple J, for one day to gauge the audience’s music tastes. Listeners were invited to jot down their 10 favourite songs and send them in.

The response was huge, but early listeners proved unimaginative and voted Joy Division’s Love Will Tear Us Apart into the top spot two years running.

Nirvana’s Smells Like Teen Spirit broke the pattern by winning in 1991.

Fearing that the grungemeisters might dominate subsequent polls, Triple J changed the rules so people could vote only for songs released in the previous year.

Mumford & Sons’ Little Lion Man took pole position last year and this year, Cee-Lo’s Fuck You and Florence + The Machine and Dizee Rascal’s You Got The Dirtee Love are tipped to be front runners.

However, they face stiff compeition from homegrown talent Angus & Julia Stone with Big Jet Plane and Tame Impala with Solitude Is Bliss. 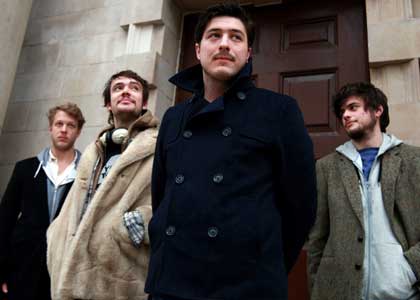