“Can you show me how to do the snow plough again?”

“No, you learnt it yesterday; you know how to do it.”

“Yeah but it’s how you stop, so it’s pretty important. I really think I need a refresher.”

Right… I peer down the slope, which is probably no steeper than a wheelchair ramp, but looks like a few shades off a sheer drop to me.

I steel myself and ease away from my safe patch of flat ground. Within seconds I’ve rapidly gained speed and can feel panic setting in. Whizzing past my fellow learners, they wave me on thinking I must have got the hang of it as I’m going so quickly… they’re wrong. I’ve completely lost control.

I desperately try to remember the slow plough: bend my knees, lean forwards and point my skis together… but I’m not slowing down.

As I see an even bigger slope looming, I give up and sacrifice myself to the snow gods, throwing myself to the ground, skis akimbo and snow shovelled down the back of my jacket.

I am learning to ski in Les Arcs 1950 in the French Alps. It’s my second day of morning lessons, and the short beginner’s slope, where I confidently weaved down the slight gradient on the first day, feels like a million years ago as everything I thought I had learnt has disappeared, along with my confidence and grace, which I am sure I had before – or maybe not.

In Europe, many kids are taught how to ski as soon as they can stand on two legs (which is why every time our French instructor says, “come on, it’s easy,” I want to punch him in the face). When I was little, I was too busy at the beach to be worried about trying to catch the snow when it occasionally sprinkled itself on Thredbo. But I’ve water-skied, so how different can skiing on snow be?

As it turns out, very. For starters, you’re going downhill. Every instinct in my body wants to lean away from the slope, but that causes you to lose balance. Then there are the ski boots, which feel like two lumps of concrete strapped to my feet, and the long, thin skis are constantly threatening to send my legs in opposite directions; forcing the rest of my body to choose sides or risk becoming a Damien Hurst-esque work of art.

But Max, our instructor, doesn’t put up with any shit, and if you learn by being thrown in at the deep end, then a French instructor is your man.

To be fair, we are a tricky group. Three of us take to skiing like a duck to water and are weaving off-piste by day three. I am not one of these people. No, my journey is a bit of a rollercoaster…

Day one, I am just so in awe of our surroundings that Max could have pushed me down the black run and I wouldn’t have cared (ish).

Arriving in Les Arcs 1950 is like shrinking down Alice in Wonderland-style and finding yourself in a snow globe. The stunning iced mountains glisten in the morning light, the gable-roofed lodges could be built out of gingerbread, and colourfully dressed skiers and boarders weave their way around you, excitedly making their way to their suited run, with 425km of blue, red and black runs on offer at the ski-in, ski-out resort.

It is almost like visiting a different planet: one you had read about in school and had heard your friends talk about, but you have no idea how incredible it is until you see it for yourself.

Heading to the beginner’s slope, we meet fiery Frenchman Max, who teaches us how to simply move about in our skis, put them on and take them off, and control our speed with the good-old snow plough. Trundling up the ‘magic carpet’ lift (like an uphill travelator), at 30 I am one of the oldest there, as French, German and Russian kids barely out of the womb whiz about me like lemmings.

I have a go at applying what I’ve learnt and make my way down the slope… and I’m thrilled to find I reach the bottom intact. I just skied! I’m quite happy to spend the rest of the morning hanging out with the kids making my way up and down the slope, already imagining myself winning gold at the next winter Olympics.

The next day, as you know, is a different story. Taking us straight onto the blue run, I feel like Bambi on ice again and just can’t get control of my skis. It doesn’t get much better throughout the day, particularly as it snows heavily, meaning our vision is poor, the snow is harder to ski on, and it is bloody cold.

Feeling disheartened, my Olympic hopes temporarily dashed, it is with trepidation that I head up the mountain on day three.

But then something clicks. And, for once, it’s not my joints.

Max shows me how to shift my weight from one leg to the other, sending me in ‘S’ shapes down the mountain. If I feel like I am going too quickly, I keep my weight on the bottom leg until I turn slightly up-slope to slow myself down. I’ve got it. I’m skiing!

The sense of achievement is awesome, particularly as I am clearly far from being a natural and really had to work at it. I’d even managed to do it without punching Max in the face; instead I give him a big hug at the end of day three’s lesson. Perhaps his method of teaching isn’t so bad after all…

To reward ourselves, our group head up to the highest point of the mountain and look out from the viewing platform over Les Arcs. With the sight of majestic mountain peaks smothered in snow coupled with the thrill of having learnt how to ski, I quite literally feel on top of the world.

Click NEXT to find out where to stay, where to eat, and where to party… 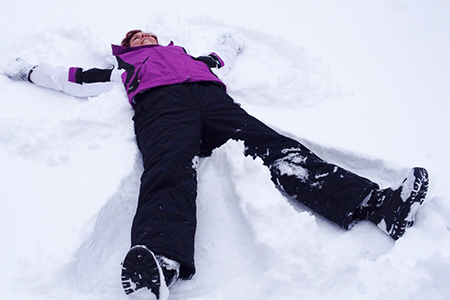 Les Arcs 1950 is a village of lodge accommodation by Pierre et Vacances. This means your apartment building is equipped with lockers for your equipment so you can ski right out from your doorstep, and everything is at your gloved fingertips. The apartments range from studios for two people to four-bedroom affairs that can sleep 10.

Rooms are cosily furnished, with big beds, soft lighting, sofas and a country cottage-style fully equipped kitchen. You also get a little balcony, if you can brave the cold.

There is a huge Cinq Mondes Deep Nature Spa, with two levels containing a pool carved into the mountain itself, heated sensory showers, a sauna, hammam and a Jacuzzi bubbling away outside in the snow, naturally.

For a traditional Savoyard tartiflette – a pan of sliced potatoes, ham and cheese – head for the La Perce Neige, and wear elasticated trousers. Or, for a really sophisticated night of gorgeously gourmet proportions, try Le Table des Lys.

During the day, be sure to seek out the yurt in the snow, where you can duck in for some mulled wine with ham and cheese by the fire. For a mid-piste refresher, pull into The Bulle Café at the bottom of the Arcabulle lift for a slice of pizza while looking out at the 360° views.

Les Arcs 1950 is relatively quiet, although you can get a cable car to Les Arcs 2000 just up the mountain, where there’s a bowling alley, a bunch of bars and a club or two.

Admittedly we were too worn out, bumped and bruised to head out at night, hitting the hay after a hearty meal and a few quiet ones at George’s Wine Bar, owned by a friendly Scot.

However, on a high after our last day of skiing, we nearly gave up finding any form of nightlife in 1950 before we happened across O’Chaud . In we went for ‘one drink’ and out we came some five hours later, stumbling back to our apartments having done countless shots of the local liqueur, genepy, seen an awesome live singer whose stage was also the bar, and various other hazy goings-on that I have wisely chosen to forget. Enjoy.

Phillip Island: March of the Penguins

Review: We Bought A Zoo