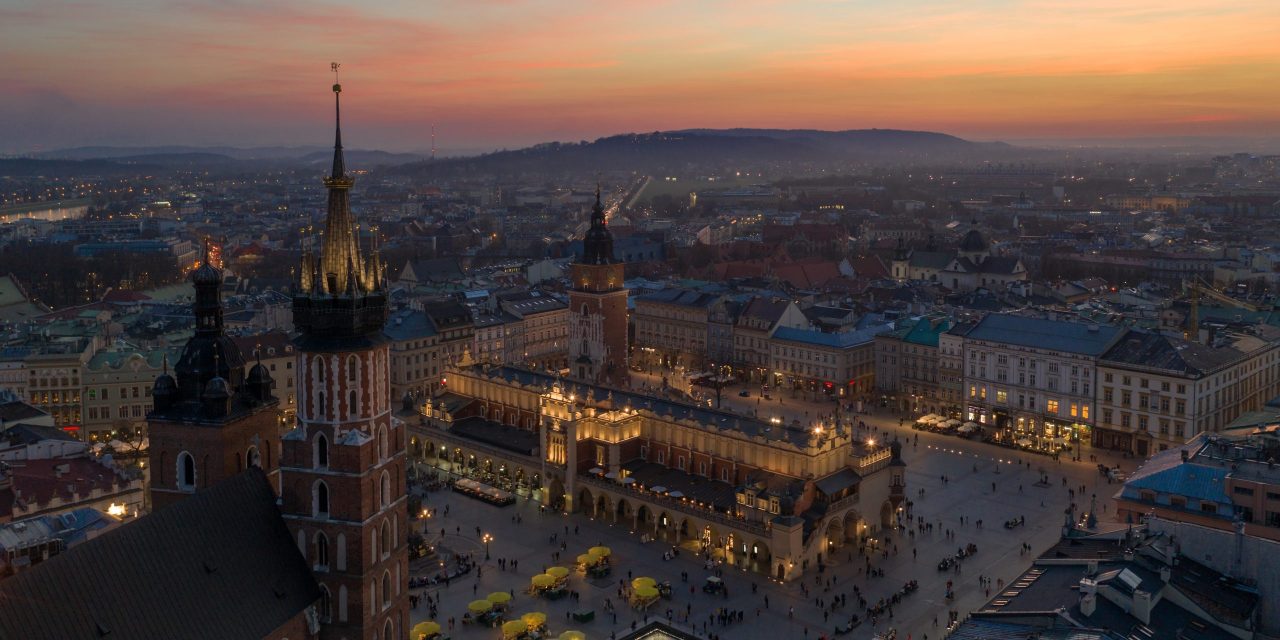 For a city that doesn’t exactly have a bubbly  history, Krakow is certainly doing a lot to shake off its repressed past.

Sandwiched between Germany and Russia, it wasn’t until the first free elections in November 1990 that stability appeared in sight. While still a developing economy, a visit to Kraków is far from a visit to an eastern Europe backwater.

Old times
Much of what can be enjoyed in Kraków is in its Old Town which was first planned in 1257. Fortunately the city avoided heavy bombing during WWII, and as a result much of its older architecture remains. Like many great European cities there are museums, churches and art galleries galore to keep visitors on their feet for days, pleasantly interspersed with restaurants and cafés to keep the same people off their feet for hours. Boasting the largest medieval town square in Europe, the Main Market Square is surrounded by landmarks that represent the best of Poland.

Good times
Because you can buy a pint for less than £1, Kraków has become a big destination for buck’s parties, hen’s nights and anyone else wanting a massive night out on the tiles for under £20. While this has its obvious money-saving advantages, it also means you’ve got a fair chance of seeing a bloke in a chicken suit being chased down the street by a man in a duck suit. Amusing at first, until a waitress asks you if you’re with those English men”.

But the fact that a few bucks and hens head there to make pork chops of themselves should not detract from the fact that this is a top-notch city for socialising. While there are reportedly hundreds of bars and restaurants around the Old Town’s market square, the best nightlife is in the Jewish quarter of Kazimierz, where students, artistic types and tourists mix until the wee hours.

Only one word of warning – be sure the Pope is not planning a visit to the country when you are. On the spring bank holiday in May this year he dropped by his predecessor’s homeland and in a mark of respect the government banned the sale of alcohol over the weekend, leaving thousands of tourists a little parched.

Also, to take advantage of the best of the social scene, get your hands on Kraków In Your Pocket which is produced quarterly and gives a cracking rundown on where to eat and drink, and, more importantly, where not to eat and drink. It’s available free in hotels and hostels throughout the city.

Jewish quarter
There’s obviously more to this part of the city than bars and nightclubs. The area is dotted with synagogues, cemeteries and museums which act as a reminder of the Nazis’ oppressive reign. Of the 65,000 Jews who lived in the area before the war, it is believed only 6000 survived. Scarred by what happened, it is estimated that only about 150 live in the city now.

Auschwitz-Birkenau
Anyone who makes the effort to get to Kraków should also make the effort to get to one of the most significant sites in modern history. It was at these sites where the Nazis murdered between 1.1 million and 1.5 million people during World War II. To the Polish government’s credit, the site was protected shortly after the end of the war to ensure the world would not forget the atrocities committed there.

Plac Nowy
Everybody loves a good market. Well, you might be disappointed here if you actually want to buy anything, but it is certainly worth a look. With an assortment of what looks like junk for sale, this market attracts all sorts. The surrounding streets also have a variety of arty street entertainment on weekends which will probably have you scratching your head and clapping at the same time.

London sound: The hottest music gigs and club parties this week, incuding The Stone Roses and The Playground Festival

Other traveller reviews on Brazil