Snowbombing in the Austrian alpine village of Mayrhofen – a world-class electronica extravaganza in the snow!

Gorgeous mountains, electrifying music sets and seriously outlandish fancy dress costumes: welcome to Volvo Snowbombing, one of Europe’s biggest winter music festivals. Now in its 12th year and known as “the greatest show on snow”, Snowbombing is an unmissable event for anyone who loves snow and loves to party.

For six days a year, hoards of up-for-it revellers descend on the postcard-pretty alpine village of Mayrhofen. I’m not sure what to expect, but I’m ready for a fun-packed week of raving and mayhem.

For starters, I check out the slopes, a visual feast (and I’m not just talking about the panoramics). Skiers dressed as penguins and root vegetables glide down the slopes, while the bars are packed with more fancy dress-clad skiers and snowboarders soaking up the sunshine and the stunning mountain views. 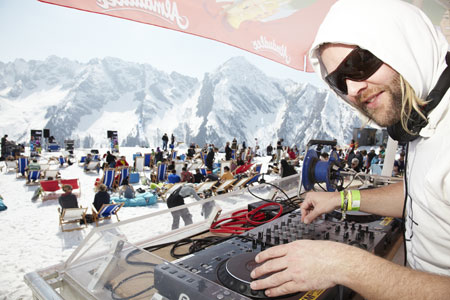 As night falls, it’s time to get glammed up for some serious dancing. The village is transformed into a clubber’s paradise with an array of music venues playing host to superstar DJs and musicians. This year, the line-up is bigger and better than ever with headline acts including Pendulum, The Prodigy, Chase & Status, Katy B, Magnetic Man and Fatboy Slim.

There’s a deluge of sensational events situated out of town known as ‘bonkerism’, where you could find yourself transported into a club night, an igloo rave or a Narnia-themed forest party. Among these events is the uber-cool Arctic Disco, described by Fatboy Slim as “the most amazing place I’ve ever played”.

Take a trip up Austria’s biggest cable car before dancing in a club made completely of snow, and sip cocktails in glasses made from ice. Snuggle up under blankets in an ice cinema, dance around a bonfire under the stars and enjoy a soak in a hot tub.

Alternatively, take a coach 2km out of town to Backcountry Party, set in a 200-year-old traditional wooden farmstead, complete with a sound system, split level bars, stage and decks, sited in the ‘forgotten valley’ of Floitental.

Another highlight is the fancy dress street party with a wacky parade taking centre stage. You’ll see everyone from superheroes to Osama Bin Laden, all dancing like it’s going out of fashion. Be prepared to dress up in a dramatic costume as it’s probably one of the best street parties you’ll ever go to. 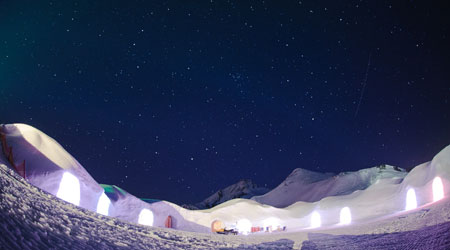 Snowbombing isn’t only about partying and hitting the slopes. The event is spread over six days so there will be moments when you’ll want to sit back, relax and escape the madness. Mayrhofen is home to more than 50 spas offering everything from rooftop hot tubs to Moroccan-themed pools.

Hotel Strauss boasts a particularly plush Moroccan-themed spa that’s perfect for a post or pre-party pampering session. Blessed with a hammam, a Finnish and Bio Sauna, a steam bath and inhalation cave, there are plenty of spots in which to soothe your sore head.

A chocolate box village, Mayrhofen offers 625km of pistes, 167 lifts and gondolas, a 3286m glacier and an award-winning terrain park. Pistes offer panoramic views and are framed by pine forests. Spring (when Snowbombing takes place) is a great time to visit as you’ll often find a massive dump of snow coupled with sunny bright-blue skies.

Boarders can find plenty of thrills and spills in the award-winning board park. The region is also home to Harakiri, the steepest piste in Austria – with gradients of up to 78 per cent. As it’s a prepared run, you can expect a mogul-free ride thanks to super-duper piste bashers. 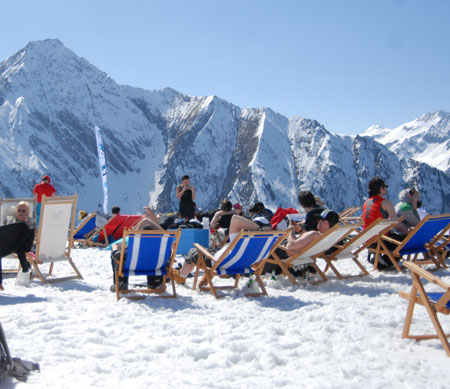 WHEN TO GO: April 4-9 2011.
GETTING THERE: Fly to Innsbruck with easyJet (easyjet.com). Mayrhofen is 30 minutes’ drive away. Alternatively, take a coach direct from London to Mayrhofen, which costs from £103 and takes 24 hours. See snowbombing.com.
GETTING AROUND: On skis or snowboard. The village is easily explored on foot.
VISAS: South Africans need a Schengen Visa.
CURRENCY: Euro. 1 GBP = 1.20 EUR.
LANGUAGE: German, but English is spoken.
GOING OUT: There are 25 bars, seven venues, one silent disco and six loud ones.
ACCOMMODATION: Included in the Snowbombing package.
GET MORE INFO: snowbombing.com.

Australia on high alert as bushfires rage in three states