Some like it hot in Fiji: We ditch the guidebook and go in search of secret natural springs

Last time I checked, they weren’t in any guidebooks. But just beyond the city limits of Nadi, in the forests of Viti Levu, there are some natural springs that rival even the poshest Fijian five-star resort spas.

At a chance dinner with some Aussies, a middle-aged surfer mentioned he had heard of some natural springs nearby, though he wasn’t sure where exactly. That was all we needed to know…

The next day we hopped on our usual mode of transportation – the tarp covered bed of a rusted pickup truck – and headed into the forests.

We had no idea where we were going. We just put our faith in his navigation skills and hoped to strike lucky.

Twenty rocky minutes later, the truck stopped by a makeshift dirt road and a house. A circle of five men occupied the front porch, grouped around an enormous wooden bowl of murky water – kava.

Now imagine two girls, bikini-clad and unmistakably American, making their way toward this porch. “Three dollars,” said one man with the heavy English of a native Fijian. 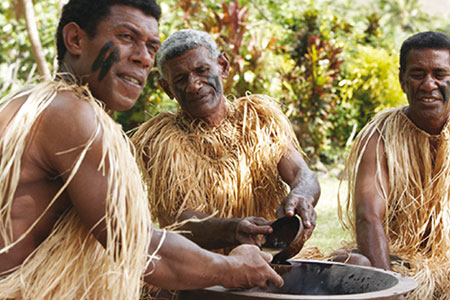 We handed him our money, and he pointed off into the thick forest. “First mud, then hot, then cool.” We made our uncertain way into the mess of greenery, until we saw it. Without even a prissy toe-dip, we slid our bodies straight into the dirty pool that reeked of sulphur.

It felt incredible, being neck deep in warm, slimy mud. We basked in the pit for a while, until the mud on our exposed skin began to harden and crack.

A hot spring stood only meters away from the mud, and we rapidly jumped in, without anticipating that a natural spring could actually be all that hot. We were wrong.

The temperature hovered somewhere between 50 degrees and hell. We quickly rinsed off the mud and made our way to the final pool. The cool water of the last spring was a refreshing change.

A young couple left before we had a chance to speak, but I like to imagine they fell upon the springs in the same chance manner as us; an offhanded remark, an urge for something new, and not enough money for a professional mud facial.

Voila – an amazing sidetrip away from the city. And all for three Fijian dollars.

Cost of living in USA