You know those weeks that leave you feeling like you’ve just found out your gran is a Mossad agent? And that your feet are in fact made of compacted wafer-thin ham – the kind of week that leaves you feeling like nothing seems to make any sense anymore? That was how I was feeling come Friday. Having definitely started the week in 2013, I felt like I was ending it in the dim and distant past.

First the Adam Goodes incident: the Sydney Swans utility was racially abused during his side’s match against Collingwood, in, of all weeks, the Indigenous round of the AFL. Goodes to his credit made sure his abuser was removed from the stadium. At first the most depressing thing was that the comments came from a 13-year-old girl, who reportedly called him an ape. But things took an unexpected turn when Collingwood president Eddie McGuire said during his radio show that Goodes should be used to promote a new King Kong musical. An unsavoury incident quickly became a shit storm and McGuire waddled out in front of media to give a grovelling apology, during which he claimed he “said something which was the opposite of what I was thinking at the time”.

So what he was thinking was that using Goodes to advertise King Kong would be a bad idea? It’s hard to believe until you hear McGuire talk, at which point it becomes clear that having thoughts at all must be something of a struggle.

And then Sepp Blatter, a man who despite time and again showing that he hasn’t the wherewithal to run a bath, and yet continues to be in charge of the governing body of the world’s biggest sport, saw it fit to describe a newly appointed female executive, Australian Moya Dodd, as “good and good-looking”.

Sport is perhaps the most important arena of public life. Sports stars are admired and listened to. And for the most part they do a pretty good job, but it’s about time we had some sporting administrators who understood the seriousness of their roles. 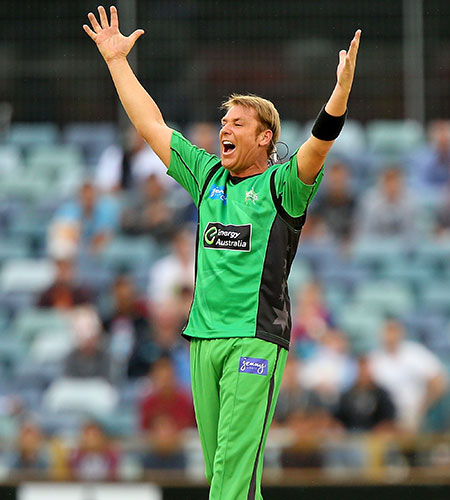 Shane Warne is clearly an optimistic man – the fact he thought he’d get away with that hair replacement advert is evidence enough – but his claim that Australia would win The Ashes if Kevin Pietersen is out strikes me as bordering on deluded.

While having KP in the England batting line-up would undoubtedly be a great boost for England, it’s simply facile to suggest that his inclusion or otherwise will settle the series.

Australia haven’t got the bowlers to decimate England’s top order and, other than Michael Clarke, who is probably the only current Aussie player who’d get close to the all-conquering team of the Nineties, they haven’t got a batting line-up that can handle the world’s current premier bowling attack, sporting what by any objective measure includes the world’s best spin and swing bowlers, Swann and Anderson.

Bring on the summer.

Worse than his bite: Adelaide dog breaks world record for the largest bark