Professional football watchers are digging their toe into the turf and throwing their arms in the air without being touched over Luis Suarez’s latest flops – it’s a blight that we do our best to ignore so we can watch the game without hating it.

With no premier league and England playing the world’s worst side, pundits needed something to talk about last week, so they chose diving, a justified debate as it’s probably football’s biggest on-field issue. As FIFA VP Jim Boyce said, it’s “a cancer on the game”.

Liverpool’s Suarez has copped most of the stick, but he’s by no means alone – except for when he falls over in a penalty area after someone looks at his sock the wrong way, causing him to roll around like he’s been shot in the achilles. Then he’s totally alone.

Football is god in most of the world, except Australia and the US. And if you talk to any Aussie or Yank who’s anti-football (or soccer), the first jibe they’ll make is that footballers dive, often followed with a chorus of “they’re all a bunch of wimps”.

Usually worse than that. It’s indefensible for the football fan, because players do dive. And, worse, when they do, they roll around as though they’re passing a gall stone through their knee-cap.

Then the dance of the law book takes place – since play’s been stopped for their performance, the ref must ask them to go to the side of the field, at which point the club’s wizard gives him a drink of water and he’s all better. Then he re-enters the field.

Michael Owen pointed out that there’s a difference between diving cold and going down when you’ve been touched. “It is a skill and it has been done for years and years,” he says.

He’s right, it is a skill for a striker to beat their defender for position, legally get between the ball and the opponent, drawing them into a false move and forcing a free kick. But to go down when you could have kept playing, that’s still cheating.

Simulation is supposed to be a yellow card, but it’s tough for refs to tell for sure whether a player’s caught a big of leg, the ball or air. It’s time for retrospective suspensions.

Agree or disagree? Is diving a blight on football? letters@tntmagazine.com 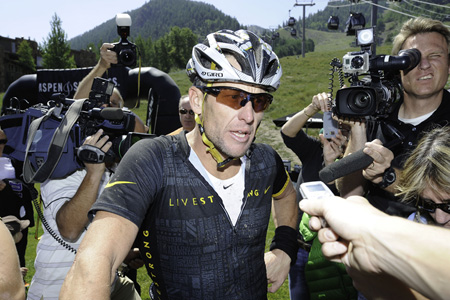 Major scandal? Go on, just do it

Maybe the public doesn’t give a toss if their superstars cheat on drugs or wives – it must be true if major sponsors are willing to back them at their lowest.

After the US Anti-Doping Agency published 1000 pages of evidence against Lance Armstrong, explaining why they’ve banned him from cycling and stripped him of his seven Tour de France victories, Nike released a statement saying they’ll continue to support him and his cancer charity.

The ADA says that Armstrong led a “massive and pervasive” doping programme at his cycling team from 1998 to 2004. That’s pretty bad if it’s true. If it’s not, it’s a bad look for a massive sports brand. Apparently not.

They also supported Tiger Woods after his name became mud for a while there.

So on the assumption that Nike has stupid amounts of money and makes few decisions lightly, or without researching how it will reflect on them, we must just not care or at least be more than willing to forgive.