Sports view: The Lions will roar loud and strong, then lose series 2-1

The British and Irish Lions have their best chance of actually winning a tour when they go to Australia in June, with the Wallabies in what some would call a “rebuilding phase” or what others would call “a shambles”.

The competitiveness of the Six Nations, from day one’s tight finishes to the final day thrashing of England by Wales, creates the illusion that these are great players – but if they were that at least one nation would be ranked in the world top three.

The Lions squad is a good one, an obvious one mostly. But there are few positions that will worry Deans. There’s no X-factor, though Welsh prop Adam Jones is a monster and will take some handling.

A problem for the Aussies would have been if they picked Jonny Wilkinson had he made himself available, if only for the psychological impact of his World Cup exploits, but also for his top form for Toulon. And with a series almost certain to be decided up front, a reliable kicker would be handy. But still, it’s an evenly poised series.

Gatland by contrast has a Team GB supergroup. But both squads are jostling for underdog status – if history is anything to go on, the Lions have the edge there. To not lose 2-1 – the score of almost all tours of the professional era – is his challenge.

If Gatland can turn it around anywhere, it’ll be Oz, right now. He rightly picked a stack of his massive, England-thrashing Wales side with confidence and combinations that work. That’s golden when bringing together a team at short notice. But Deans really should win this series, and well.

Agree or disagree? Should Deans’ Australia defeat the Lions? letters@tntmagazine.com 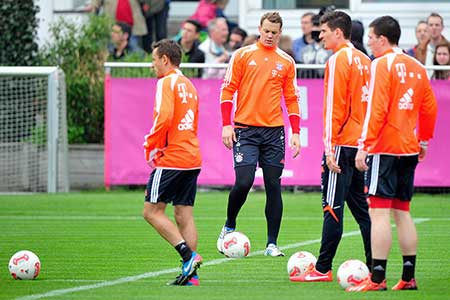 You probably have a preference between Real Madrid and Barcelona, football’s two richest clubs – for me, it’s Barca for making tiki-taka effective. And ‘cos Cristiano Ronaldo shits me.

But after Bayern Munich and Borussia Dortmund sent them packing last week to set up an all-German Champions League final (Wembley, May 25), a new decision has to be made.

Jorgen Klopp’s underdogs Dortmund or the fourth richest club Bayern (behind Manchester United)? Dortmund is built on youth, while Bayern can buy anyone they want. Sadly for Dortmund, who Bayern want plays for Dortmund. Mario Götze will jump in the summer, with hot striker, Robert Lewandowski, also tipped to follow.

It’s hard not to sympathise with a team that lost two of the last three Champions League finals, but Bayern’s focus on their rivals’ manpower comes across as bullying. I’m in The Black Yellows camp.

Go surfing in the United Kingdom