With no World Cup to contend with and overwhelming approval for the format, the likes of South Sydney’s Greg Inglis and Isaac Luke are already putting their hands up for next year.

Rabbitohs coach Michael Maguire said he’d had to rest stars such as them for the weekend at Eden Park due to such a short pre-season but their enthusiasm to play will be hard to subdue next year.

“The pre-season was very short this year and that is why we held some players back but the likes of Greg Inglis and Issac Luke, they were busting to play,” Maguire said.

“They are big fans of the concept but after a big finish to last year and what we have in front of us you have to consider that.

“Issac was asking to play every day and this type of game would really suit him, but he had a massive year last year and we had to consider that.’

Even more bursting to play, especially come finals time, was Cowboys and World Cup winning halfback Johnathan Thurston, who was home in Townsville watching on TV. 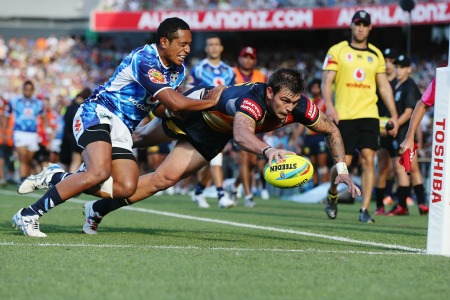 “I think he will want to be part of it next year,” Copper said.

Not at home was Brad Fittler, the former Roosters star who came out of retirement and impressed before falling, like so many others, to injury on day one.

NRL clubs were only required to commit one of their top five players under their salary cap payments for the tournament but it could be more next year.

England’s Super League clubs, including Wigan Warriors who were in Auckland watching on ahead of the World Club Challenge against Sydney Roosters in Sydney on Saturday, are also keen to be part of it.

The all-Queensland final was a surprise to those who’d watched all weekend after the Cowboys beat the much-fancied New Zealand Warriors in the semi-final.

The Cowboys were considered among the weaker teams as far as personnel was concerned, but didn’t shot it as they overcame the Broncos.

The Broncos were without Ben Barba but the Cowboys were also missing one of their speedsters in Lachlan Coote.

The 16-7 victory was the first trophy won by North Queensland in its 20 years.

Over Your Cities Grass Will Grow – movie clip and review

Asleep in a sari

Build your own igloo… then sleep in it. If you dare