The Hockeyroos – every Australian team needs a nickname – won gold in Seoul, Atlanta and Sydney, but it’s been slim pickings since. Now, in London, the Hockeyroos arrive, for the first time, as outsiders, a developing side with plenty of promise but for whom, according to the experts, these Games may come a few years to early in the learning curve.

Still, according Casey Eastham, the Hockeyroos’ star player, and one of the world’s top midfielders, Australia could yet be the surprise packet in a tightening field.

“Going into the Olympics, the Hockeyroos come to mind because we’ve had that success in the past, but more recently, we’ve been in a constant rebuilding phase,” she admits.

“We slipped down to number nine in the rankings, to the point we’re probably consider an outsider. But you can’t pick it – any team in the top eight or nine can knock out any other on the day. That’s why the mental side of it is going to be so important – in London, anything could happen and then, I suppose, four years later, in Rio, we’ll have a really good, really strong side.”

What the Hockeyroos lack in experience, they make up for in athleticism – physically, they may be the best-prepared team in the competition, something Eastham attributes to them moving to Perth for the final months of the build-up.

“It’s an Olympic year, so all the squad has become full-time, training six times every week, probably two sessions a day, spending a lot of time in the gym with extra weight-training,” she says.

“We’ve been working really hard on our penalty corners because that can become really lethal if you do it well and developing that really helps us become a medal threat. Physically, we’ve ramped it up – I’ve never played in a group where we’ve had this kind of strength, power and speed.” 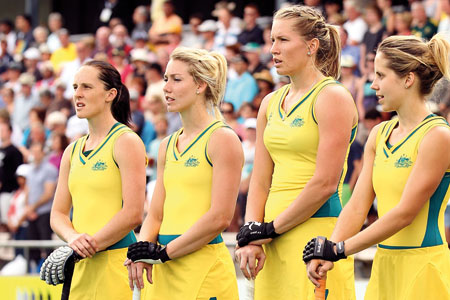 Four years ago in Beijing, Eastham was the baby of the Australian squad. Now, at the ripe old age of 23, she is one of the most experienced players.

Eastham, then still a teenager, scored four goals in Beijing but it wasn’t enough to propel Australia beyond the group stage into the semi-finals, a heartbreaking draw in the last match against China, the eventual silver medalists, condemning them to fifth place.

“We missed out on making the semi-finals and I remember that experience – you don’t want to find yourself in that situation again and I suppose I’ve just been trying to help prepare some of the girls mentally for that,” she says. “It’s a big thing to be able to get over the line in a crucial game.

“Four years ago, it was a big thing for me just to make the team so I wasn’t thinking too much about it but, with any Olympic preparation, you hope to come home with a medal. We’ve definitely got that in mind in terms of our goal-setting and what we’re pushing for.”

Eastham knows her younger teammates will increasingly be looking to her for leadership, for instruction, for a moment of individual brilliance when the going gets tough, and she is unfazed by the heightened expectations. 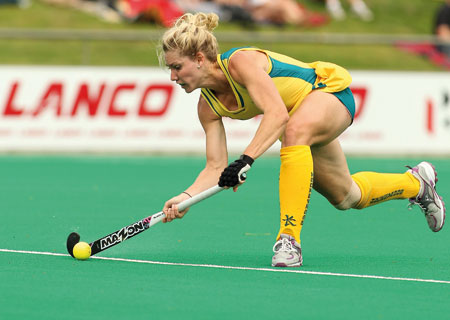 “That’s changed a lot, going from being the baby of the team to one of the most experienced players,” she says.

“I’ve gone from being a first-year player to one of the leaders, so there’s a fair bit of added pressure. But that’s all part of it and I’m really excited about taking that challenge, although I don’t really consider myself an older player.”

On the back of her break-out performance in Beijing, Eastman was promptly tipped to become one of the world’s elite players. And, although among the top handful, Eastham admits the years following the last Olympics were a slog.

“The first couple of years after Beijing I was a bit disappointed – I didn’t feel like I was getting to level I wanted to be at and hit a plateau. I was pretty down about that,” she says.

“But a new coach came onboard and I’ve felt like I’ve made a lot of progress since then and I’ve definitely got a lot more confidence. I’m in the best shape of my career – there are niggling injuries but nothing major and I’m the strongest I’ve ever been.” 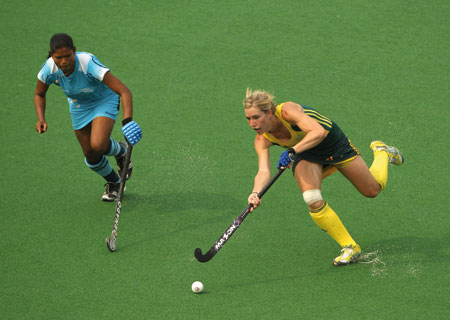 Eastman’s burgeoning confidence will be tested in the Olympics’ opening match, though, when Australia face New Zealand at the Riverbank Arena on Sunday morning.

The Kiwis – or the Black Sticks, as they’re known – are ranked above Australia, and the loser of this opening clash will face an uphill battle to qualify for the final four.

“New Zealand are a good team – they always play better against Australia, which is the same story as in most sports,” Eastham says.

“But I think if we get on top early then that’s the key – but certainly, having Australia v New Zealand first up in the Olympics is a pretty special way to start the tournament. It’s something we’re all looking forward to.”

And, despite the pressure, associated with Olympic competition, Eastham insists she will find a moment to enjoy it, to savour the thrill of participation, which, after all, only comes along once every four years.

“We normally don’t get a lot of people along to our hockey matches, but the Olympics is different – I remember, in China, having 17,000 people in the stadium and the atmosphere is awesome,” she says.

“I remember trying to talk to one of my teammates and not being able to hear each other. It really makes you realise where you are and adds to your performance.

“The athletes’ village is pretty amazing – it can become a bit of a distraction and our programme runs for the full two weeks. But you’ve got the swimmers who finish after a week and they’re off partying after that – and you hear them coming home late.

“The food hall is just a freak show – all these amazing athletes and bodies, right at the pinnacle of their performance. And all the are very patriotic – no matter what sport, there’ll be athletes there to support each other, because we’re all in it together.” 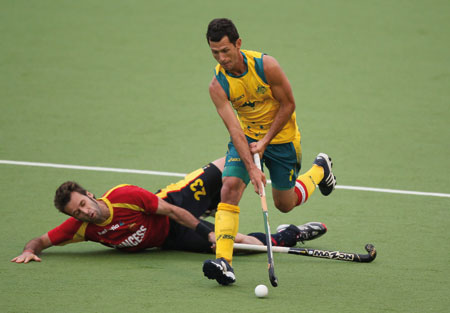 If the Hockeyroos will need to upset the apple cart if they are to win a medal, their male counterparts, the Kookaburras, come into the Olympics as the world’s top-ranked side and hot favourites to take home gold.

After winning gold in Athens in 2004, Australia were expected to again face the Netherlands in the decider in Beijing but suffered a shock loss to Spain in the semi-finals, eventually coming home with bronze.

The Kookaburras since made amends, winning the annual Champions Trophy four years running, as well as gold medals at the Commonwealth Games and World Cup in 2010.

Don’t be surprised if it comes down to Australia – led by Jamie Dwyer (above), the world’s best player – and the Netherlands.

Learn to make pizza like in a pizza masterclass