A weekend out west

I stand at the mountain’s edge, staring down an 800-foot drop, willing myself to take the plunge and jump. The rain has slowed down to a London-esque trickle but the strong winds still echo across the valley. It’s the most impressive landscape I’ve seen in the Blue Mountains region, yet it’s only my guide Glenn and me here. Glenn is a bubbly, bearded fellow with a penchant for wildlife and adventure. He effortlessly jumps across the 80cm gap and dances along the one-metre-wide narrow walkway of Hanging Rock. The large slab of golden sandstone precipice juts out from the cliff face as though detached, hence the name. If he had put a foot out of place and slipped – because you know it’s wet and windy up here – I would have got to watch him tumble down past 250 metres of lush forested valley.

A thick fog swirls around the mountaintop, sometimes blocking the view before allowing a glimpse of the bushlands below.

“It’s eerie, but beautiful,” I say, more to myself than to Glenn, who has now come back to join me. We make our way back up the cliff trying to stick to a time schedule.

“The mist can be deceiving,” he replies. “I brought a woman out here once and she walked right up to the edge. If she knew how deep the drop was she wouldn’t have stood so close.”

Hanging Rock is relatively unknown. For the lucky ones who have seen it – well, they put a kind of claim on it as the best place to visit in the Blue Mountains. But it’s not a stroll in the park – or should I say bush? – to get there. It’s a ten-minute drive from the town of Blackheath until you come to the first fence. From here, Glenn and I shoulder our mountain bikes, climb the fence and begin our seven-kilometre journey to Baltzer Lookout. The last part of the track is too arduous for bikes which means carrying on by foot. On my way back to our bikes I scramble up a wall using my hands to pull myself up the steep slope.

Unlike Katoomba’s attractions such as the Three Sisters and Scenic World, here there are no signs, paved tracks, information centres or handrails. Before my journey back to Glenn’s Ute I take one last lingering look over the scenery of Grose Valley. It’s as though I’ve been allowed into a secret club. Probably in the same way as those who reminisce about the good old days when travelers could literally stroke Stonehenge or go to the top of the Statue of Liberty, I imagine I’ll get to one day boast about how far I got out to Hanging Rock. It must only be a matter of time before it becomes overrun with tourists, until the dirt road becomes paved and a barricade stops the thrillseekers from dancing with danger. 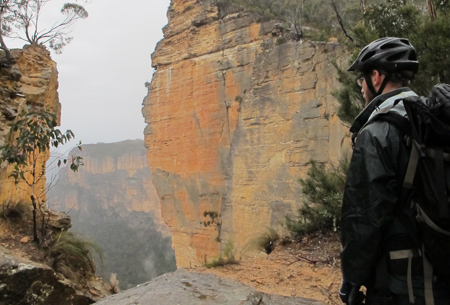 “Have you had much experience using bikes with gears?”, Glenn asks me.

“Well, if you count my experience in spin classes then I guess I’m pretty good,” I reply.

He shows me how to use the gears and away we go.

“You’re going to want to dodge the rocks bigger than a fist,” he says. Two-foot deep puddles the size of cars pop up along our track. At first, I try to ride around them, until realising it’s more amusing to power my way straight through them, muddy water splashing up on my legs. My jumper is already drenched from the rain anyway.

Now on our way back to the car I need to go slower and take more breaks. The arduous trail from Baltzer Lookout to the edge of Hanging Rock has wiped me out. The ever-patient and supportive Glenn takes his time, never rushing me or pushing me beyond my limits.

Occasionally I get off my bike to push it up a hill and when I do my knowledgeable guide discusses the surrounding flora and fauna. Lines of eye-popping yellow shine out from the khaki greens and greys of the bush.

“Wattle,” he explains to me before pointing out gum trees, tea trees and waratah (the New South Wales flower). He pulls off a heath banksia from a bush. Imagine if a porcupine was a log – a strange analogy but go with it. It’s covered in thick bristles and Glenn demonstrates how the Aboriginal people used to suck out nectar. Right now, its spikes are a yellow-brown but I learn it can go a vibrant red in the warmer months.

“It’s pretty sweet but it feels so weird when those prickles get stuck in your throat.”

We see lyre bird tracks and then moments later, like waiting for the thunder after a lightning storm, we hear them singing. Bright red and blue rosellas flitter from branch to branch while the regal black and white currawong stands by the side of the road watching us. Besides the lone hiker who passed us a few miles back, the Aussie birds are our only company; the only ones with the guts to brave the cold, wet, weather. 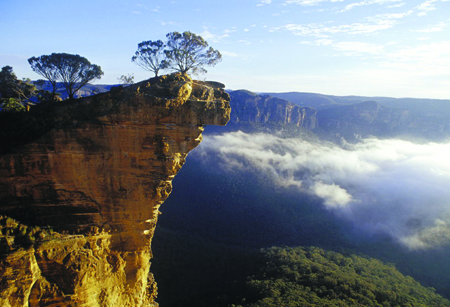 When Glenn drops me off at Katoomba I’m soaked and muddy and feeling very sore in my derriere from the bike seat. Standing on the main drag I look up to see the grand Carrington Hotel. I’m not a guest there but I walk around its common rooms, clutching my backpack containing clean clothes and dry socks. Stealthily I slink into their bathrooms and change before finding the billiard room and collapsing in one of the big leather couches, ignoring the sign outside that reads “Guests only”.

After catching my breath and realising it’s dinner (and beer) o’clock I head next door to the Old City Bank Brassiere. On my way I see teenagers loiter in the Carrington’s swanky front garden drinking and smoking. Entering the cosy pub, I notice a mix of locals and tourists. Regulars come in and kiss bartenders on the cheek while a band sets up out the back. A sign proudly states: Winner – Best Regional Brasserie in NSW 2007, 2008, 2009, 2010, 2011. The list of boutique beers on tap and local wines is impressive. I opt for a schooner of Amber Ale and order myself a wagyu beef burger and chips. After my day I freaking deserve this. For a mere $14 I’m blessed with flavourful comfort food. And slowly the beer helps numb the pain in my butt.

Rain and wind greet me again the following day. The national park is closed, tours are cancelled, and the walk near the Three Sisters has shut down. Apparently the popular attraction was struck by lightning last year and all the maintenance money went towards its repairs instead of track restoration. I take it as a sign that the time has come to farewell the mountains.

I’m still stiff and sore from the previous day’s activity so the plan is to break up the 90-minute drive back to Sydney. Twenty minutes past Katoomba a billboard catches my eye. It has the picture of a large pie and on top lounges a creature that is half alluring woman and half tomato sauce. Pulling over I see signs such as “Cleanest Toilets in the Blue Mountains” and “We heart our customers”. I’m intrigued.

With over 40 choices of pie, it’s the largest selection I’ve ever come across. Flavours such as lamb and shiraz, tuna mornay and prawn & scallop are enticing but it’s mid-morning so I go with the big brekkie pie filled with tomato, onion and a poached egg with melted cheese on top and the pumpkin, cashew and leek. While the coffee could be a bit stronger, there is nothing weak
about these pies.

Everything is made fresh on the premises and the open-planned kitchen means I can watch the pie-makers work their magic. The owner stands behind the counter scanning the room smiling at all the people enjoying his masterpieces. Clearly, he really does heart his customers.

With a full belly, I’m more satisfied than I could imagine. I jump in the car and leave behind my wilderness adventure and head back toward the big smoke.

Emma’s biking adventure was through lifesanadventure.com.au

It’s All In The ACT