Student protests: attacks, fires and a vow to keep fighting

Student fury over tuition fees erupted last night as protestors battled police in anger over the government’s decision to hike university costs. Demonstrators defaced a statue of Winston Churchill, ripped flags from the Cenotaph and set fire to the Christmas tree in Trafalgar Square. However students have vowed to continue the fight.

A car carrying the Prince of Wales and Duchess of Cornwall was attacked by a mob.

Although most protestors were peaceful, a small faction was intent on violence. Police had missiles, including bottles of urine, paint, metal poles, paint-bombs and smoke canisters thrown at them. 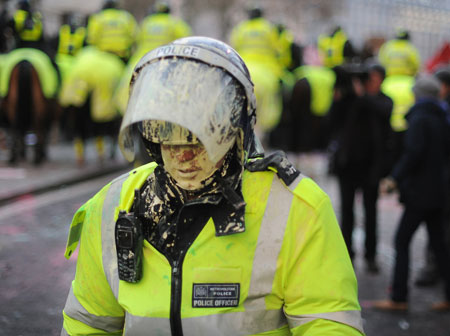 Buildings, including the Supreme Court, had their windows smashed and there were reports of looting on Oxford Street.

Violence appears to have been used on both sides as police beat protestors with batons and charged them on horseback.

By the end of the protest, 34 people had been arrested, 12 officers and 43 demonstrators injured. 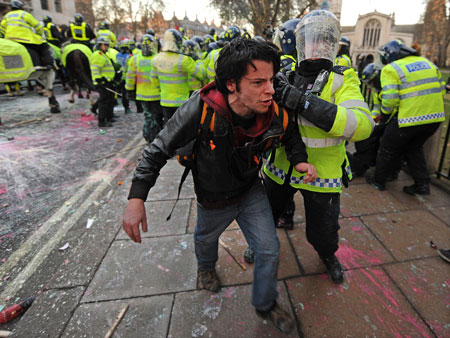 Anger boiled over when the news reached protestors that MPs voted last night for a rise in tuition fees. Some universities will now charge up to £9,000 a year, making further education too expensive for many young people.

“We are incredibly disappointed and angry with the politicians who have let us down so badly. They have voted for a policy they know is unfair, unnecessary and wrong.

“But this is not the end, and our protests and our work have sparked a new wave of activism which will grow stronger by the day. As they come for the education maintenance allowance, as they seek to raise interest rates on our loans and as they peddle lies about fairness we will expose their betrayal. I am incredibly proud of the student movement today and we stand ready
to fight the next stage of this campaign together. Our future is at
stake.” 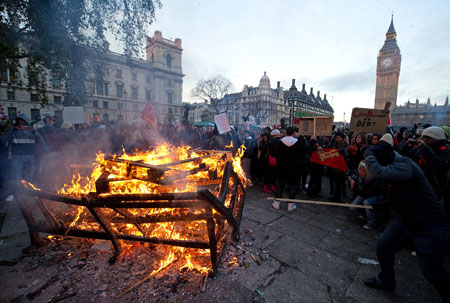 David Cameron has spoken out against the violence at yesterday’s protest, calling it “completely unacceptable”.

“Of course there is a right to protest peacefully, there always should be,” he said.

“There is not a right to go on the streets of London, wanting to pursue violence and smashing up property.

“Seeing people swinging from flags off the Cenotaph and defacing the statue of Churchill – I think people going about their everyday lives in this country will think it is unacceptable.” 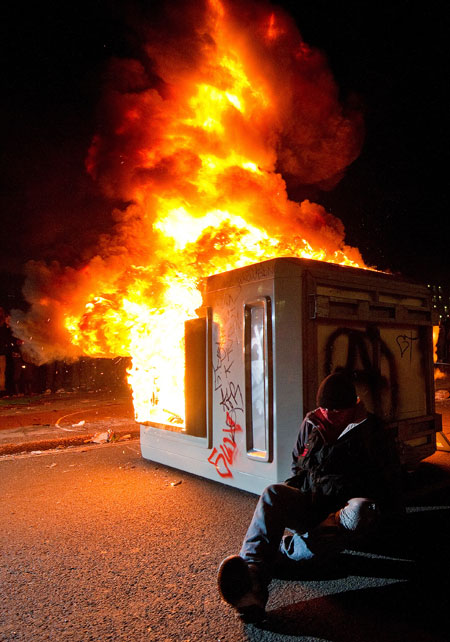 Dragons Den gets a new dragon