Forget tree hugging; cuddling lumps of rock is the order of the day at Stonehenge’s Summer Solstice celebrations, along with the (optional) shedding of clothes to dance upon the stones. That said, most people will just stand goggle-eyed at 4.45am on Tuesday, June 21, as the sun rises spectacularly behind the megalithic monument on Salisbury Plain, in an event that marks  an important date in the Pagan calendar.

The Summer Solstice is a mass gathering with a festival-feel, attracting around 20,000 people.

Modern-day druids togged up in sweeping white robes and headdresses are joined by hippies, performance artists, families with wide-eyed kids, local teenagers with carrier bags of grog and revellers there for the all-night bender  – or for a precursor to Glastonbury which begins a few days later on June 24.

Aside from the rock hugging and naked dancing, expect dancing, singing, chanting and meditating because, for druids, who follow the pagan religion, Stonehenge is their temple and Summer Solstice is like their Christmas.

It is one of the few times of the year when visitors are allowed to walk among the stones, but security guards and police will be standing by to stop people climbing on to them. 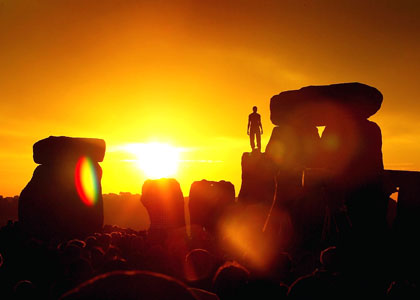 Deeply mysterious and atmospheric, Stonehenge’s ginormous structures have baffled scholars and archaeologists for centuries. Are they a UFO landing spot, an astronomical device to mark the solstices or a royal palace?

Recent evidence even suggests that the stone circle could have been a centre of healing, with people coming from as far afield as Switzerland to receive treatment.

The fact that the stones are aligned with the Summer Solstice sunrise have led experts to suggest a link to an ancient  sun-worshipping culture.

Erected 5000 years ago from bluestone and sandstone (lugged from south Wales, 240km away), these ancient rock structures are even older than the Pyramids. Stonehenge was abandoned 3500 years ago, but nobody knows why.

The surrounding countryside is also swathed in meaning, with more than  340 Bronze Age burial mounds or barrows, as well as earthworks.

Summer Solstice is the longest day of the year with the shortest night, with about 17 hours of daylight, normally a tipping point as evenings get longer and days shorter from here onwards. Solstice means “sun stands still” in Latin and refers to the fact that the sun appears to rise and set in the same place for several days. If you miss the Summer Solstice, swing by for the Winter Solstice at dawn on December 22 where you’ll find the same type of entertainment but with warmer clothes. Once you’re done with the world’s most famous stone circle, head to Avebury, just 25km up the road, the planet’s biggest stone circle which is thought to have taken more than 500 years to build.
Only 27 of its original 99 stones remain and there’s a village smack-bang in the middle of them all (it’s that big), but visitors can wander freely among them and take in the infectious atmosphere

When to go: Tuesday June 21 at dawn
Getting there: By car or on a tour
See: visitwiltshire.co.uk and nationaltrust.org.uk

Where to eat: The Polly Tearooms (thepolly.com)  offer tasty cream teas and handmade chocolates. The Bridge Inn, in Upper Woodfood (thebridgewoodford.co.uk), enjoys a riverside location and is featured in the Michelin guide thanks to its top-notch cuisine. The George Inn (thegeorgeinnshrewton.co.uk) is just four miles from Stonehenge and offers first-class locally sourced food, along with real ales and ciders.

Where to drink: Salisbury’s Wig & Quill Traditional Pub (wigandquill.co.uk) dates back to 1410 and serves up five cask ales and homemade food. Moloko Bar (themolokobar.co.uk) offers a huge selection of Vodkas, while The Pheasant (restaurant-salisbury.com)  is housed within a historic building and sells real ales.

Where to sleep: If you’re on a budget, crash at Cholderton Youth Hostel (choldertoncharliesfarm.com) at  £15.95 for a dorm bed, set on a farm  in the Wiltshire countryside just four miles from Stonehenge. The farm also has tipis which come with a BBQ,  a chimnea heater and fuel to keep you warm. Tipis can be hired from May  to October and start from £150 for  a two-night package. Alternatively, stay in cosy B&B The Wheatcheaf (thewheatsheafwilton.co.uk) from £60 per room per night.

The end of the day rolling in