I’m simultaneously gripped by awe and panic when I think of the ocean and the creatures that live there. But in an effort to overcome my fears and in the spirit of giving everything a go at least once, I embarked on a day trip out to the green room.

After being picked up from central Sydney with my fellow surfing virgins, I was taken on a scenic tour of the northern beaches. As we admired the coastline, Shane, one of our instructors, gave us a laidback lesson in surf history.

At Freshwater he pointed out the statue of Duke Kahanamoku, the Hawaiian legend credited with introducing Australians to the sport back in 1915. I silently prayed to this surf god to watch over me as I attempted to ride the waves.

Handily, the surf school’s instructors pick which beach that day’s victims get to learn on, depending on the surf conditions. Our outdoor classroom was to be Palm Beach, otherwise known as Summer Bay, of Home and Away fame. We paused for the obligatory photo opportunity outside Alf Stewart’s surf club, then made our way down to the waterfront to get kitted out. 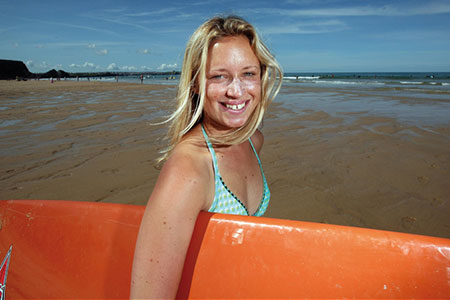 Once we were zipped into our wetsuits and looking like apprehensive Teletubbies, it was time for our first lesson on the sand.

I was too nervous to take in most of the techniques. However I did manage to commit to memory that I should stay near the back of the board to avoid nose-diving off the front. My aim was survival rather than expertise.

We learned the three ways of standing up on a wave. There’s the Ninja, when you jump into asurf stance in one clean move, the Rock Climber, which involves hooking one leg round the other before steadily raising your torso, and the one I felt a natural affinity for, the Mud Crab, when you shambolically crawl into position.

As we were shown how we should fall into the water to best avoid injury, I remembered how much I hate having seawater in my eyes, down my throat and up my nose. Clearly when surfing you have to deal with discomfort as well as fear.

Lugging an extremely heavy board around in the choppy, changeable sea was like trying to control a giant Alsatian eager to go for a walk. Whilst wading out for my first attempt I suddenly noticed a shark-shaped shadow next to my feet and momentarily freaked out. 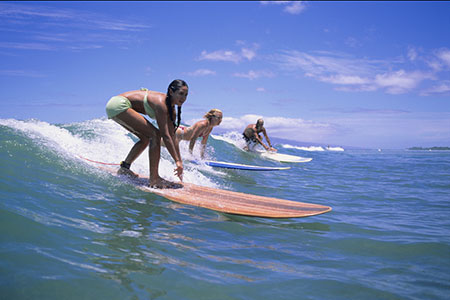 When I realised it was the reflection of my surfboard I breathed a deep sigh of relief and mentally warned myself to toughen up pronto.

Predictably, I did not take to surfing easily. I was particularly bad at getting onto my board, never mind getting up on my feet, probably due to my appalling lack of upper body strength.

Luckily for me our instructors were brilliant at handling my nerves and ineptitude. Both Matt and Shane are highly skilled surfers and expert coaches. They didn’t make me feel at all pressured and were overwhelmingly encouraging and positive.

After several futile attempts to catch waves, which I was obviously no match for, they took pity on me and let me have a go on the big board. This giant foam slab was my surfing saviour. We were told standing on it is as easy as standing on a boat. I found it slightly more daunting but nevertheless managed to successfully ride several waves with the help of well-timed pushes from our teachers.

Sensing my fear, they started me off in shallow water close to a rocky outcrop. The sea here was so tame that riding on my surfboard felt like standing still on a walking escalator. It was far too gentle to induce the addictive rush surfers rave about. For that I would have to venture deeper. 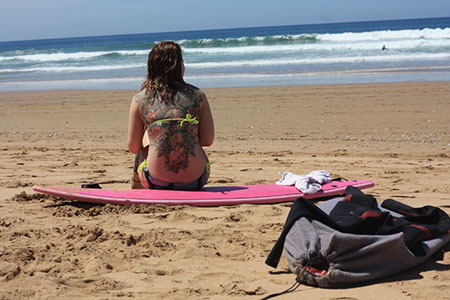 After a picnic lunch I jumped at the chance to body board. I had been told it was much easier than surfing and far less strenuous. Despite having no idea what I was doing I was absurdly optimistic about my potential ability. In reality I was at the mercy of the sea and the sea won.

Naively I thought I’d be fine in just my swimsuit and so removed my waterproof baby-grow. After all, I was wearing a modest one-piece and apparently body boarding was a leisurely pursuit. However, the ocean seemed to have been refuelled over lunch and was now more ferocious and unpredictable.

The first wave that came toppled me instantly, boob over boogie board. I hastily submerged myself under the water to cover up and preserve my last shred of dignity. It was time to put the wetsuit back on.

Before the end of the day I had one more go on the big board, this time in deeper water. I scrambled to my feet and finally felt that elusive rush as I skimmed to the shore. In that moment I totally understood why so many people are hooked and if I were more athletically inclined perhaps I’d be one of them.

Sadly I was as bad as I knew I would be but that didn’t stop it from being an awesome and surprisingly fun experience I would recommend unreservedly.