Take a trip to Cheltenham

Until the 18th century, the market town was fairly run-of-the-mill, albeit one dating back to 1226. But the discovery of a natural spring in 1716 transformed Cheltenham into Britain’s most popular spa. Scores more medicinal pools were discovered and pump rooms built.

During its halcyon period, a little later, the rich and royal thronged around the waters, many thinking they would be cured of constipation or worms. In 1788, King George III came for five weeks, with his family, to take the water cure. The city is unheralded in its significant contributions to recent British history.

Edward Wilson, a member of Captain Robert Scott’s much mythologised Antarctic expedition in 1910-13 was from here. Indeed Scott died with his arm around Wilson. GCHQ, the government’s “intelligence” (read spy) HQ, is here, too.

And the most famous Cheltonian is former Rolling Stones star Brian Jones, who died aged 27. There’s a statue erected in his honour, in the Beechwood Shopping Centre.

Today, it still has some of England’s best-preserved Regency architecture, top restaurants, shopping and its famous races, each March. If you can’t get to the Cotswolds for the races, Cheltenham is still the sort of place you can spend a day wandering around, with more attractions nearby. As a teenager growing up in the Cotswolds, I’d travel 20-plus miles to go shopping and clubbing here. Today, it still has that draw, but I’m more attracted by posh nosh eateries and the chance to do some frog in a blender impressions on a dancefloor.

I take a brief but pleasant self-guided walking tour; strolling down the grand, tree-lined Promenade, with its regal houses and expensive shops. Then on to Imperial Square, with welcome greenery and Regency terraces and the Montpellier district for more architectural elegance. 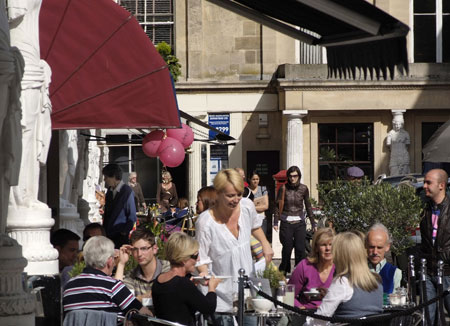 The elegant Pump Room is the largest and last-surviving of the town’s spas and the apotheosis of the city’s heritage, with a big domed roof and giant pillars. The Grade I-listed building, set in lovely Pittville Park, was closed in 2003 because the old Victorian wells had stopped working. But in 2005 the spa waters flowed once more, allowing visitors to taste the unique water, the only alkaline spa water in the country. Today it’s often used for functions and is a uniquely styled concert hall. If you’re after a more contemporary spa treatment, you could try Chapel Spa (chapelspa.co.uk).

There’s also good shopping, eating and nightlife here too (Revolution Bar, set in an old church, shouldn’t be missed). Plus it’s a good base for exploring the Cotswolds. If you’ve got your own wheels and fancy seeing some signature, syrup-coloured, quaint villages full of teashops and Middle England complacency, nip from Cheltenham to Broadway, Winchcombe or Chipping Campden.

You won’t necessarily hear many of those gorgeous, carrot-muncher, West Country accents here. For a more localised sound, nip to Gloucester, 10 miles away. It’s cheese to Cheltenham’s chalk and few would consider staying overnight, but it has at least half a day of historical sightseeing.

Settled by the Romans so they could spy on Wales, it was once part of one of the busiest trade routes in Europe, until Bristol started to steal its thunder. Today it’s rightly proud of its Victorian docks (often seen on the big screen), the magnificent cathedral, the surprisingly busy canal and Roman walls still visible in the city centre. Then head back to Cheltenham for some fancy nosh and a night out on the Regency tiles.

Sup up in style at The Daffodil, an old cinema, where diners sit in the former auditorium. Instead of a screen there’s a gaggle of busy chefs to watch – popcorn is optional (thedaffodil.com).

If you can afford it, treat yourself by knocking back some classy French cuisine at Le Champignon Sauvage (lechampignonsauvage.co.uk).

Try J’s Vodka Bar for a lively night out. Vodka. DJs. I think we both know the dancefloor’s going to get a workout (jsvodkabar.com).

Dorm beds come as cheap as £16pppn at Cheltenham YMCA. Single-sex dorms are available too (cheltenhamymca.com).

The recently-refurbished Brennan Guest House is within easy reach of the city’s attractions and has six individually-styled rooms from £25pppn (brennanguesthouse.co.uk).

Trains go regularly from London Paddington to Cheltenham with First Great Western. A single can cost as little as £15.50 if you book well in advance. Journey time is 2hr15mins (firstgreatwestern.co.uk).  For tourist information, see VisitCheltenham.com